Objects and Bodies at Rest and in Motion

The exhibition presents some thirty works selected from the Moderna Museet collection as well as external loans in the museum's Turbine Hall, with works by minimalists and post-minimalists such as Donald Judd, Carl Andre and Richard Tuttle. 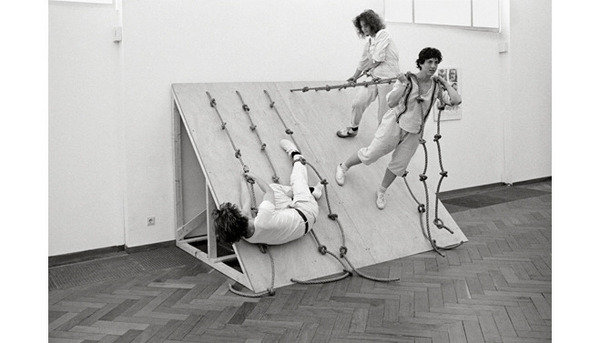 Starting on Malmö Gallery Night, September 26, Moderna Museet Malmö is presenting a comprehensive exhibition featuring a network of artists and choreographers who were active in New York in the 1960s and 70s. Objects and Bodies at Rest and in Motion focuses on the tension and relationship between the human body and solid objects.

Objects and Bodies at Rest and in Motion presents some thirty works selected from the Moderna Museet collection as well as external loans in the museum’s Turbine Hall, with works by minimalists and post-minimalists such as Donald Judd, Carl Andre and Richard Tuttle, many of which have never been shown before in the Öresund Region. The minimalists’ work has been described as “theatrical” and “scenic,” meaning that each piece is a non-illusionistic object that shares the gallery space with the viewer—instead of functioning like a window onto another world. Viewers become actors on a stage in which the artwork serves as a kind of prop or architectural frame.

The relationship between the human body and the solid object is clarified by innovative choreographers such as Simone Forti, Yvonne Rainer, and Trisha Brown who worked with many of the same artistic issues as their contemporaries in the visual arts. Artists such as Richard Tuttle and Eva Hesse also explored the relationship between body and object, but without the cold rationalism often associated with minimalism. Tuttle’s Paper Octagonal, for example, is a piece whose dimensions are related to the artist’s own body, and in Franz Erhard Walther’s work the focus is on the relationship between the viewer’s body and the artist’s fabric objects.

Malmö Gallery Night
Saturday 26 September, 6 PM-Midnight
Opening night of Objects and Bodies at Rest and in Motion. Throughout the evening, several of Simone Forti’s dance constructions will be performed and Franz Erhard Walther’s Sehkanal will be activated, as they will again periodically throughout the exhibition period. There will also be a dance workshop for all ages. Free admission all evening.

Artist talk: Richard Tuttle
Sunday 27 September, 3 PM
The distinguished american artist, sculptor and poet Richard Tuttle is featured in the exhibition Objects and Bodies at Rest and in Motion. During the afternoon he will talk about his work with curator Magnus af Petersens. Included in the entrance fee. In English.

Guided tour for singles
Friday 23 October, 4.30 PM
It is easy to fall in love with the art. So why not look for love in an art museum? Included in the entrance fee. The tour will be held in Swedish.

Guided tour with babies
Wednesday 11 November, 11.15 AM, 1.15 & 2.15 PM
The baby tours at Moderna Museet Malmö is a popular way for parents to experience art with their babies, no-one is too small to enjoy art! Included in the entrance fee. For babies 0-15 months.