For his exhibition the artist is producing two major new film works: the first is developed from a recent trip to the remote sub-tropical island of Tanna in the South Pacific, whose ecosystem has, since his film documentation, been irrevocably devastated by Cyclone Pam. 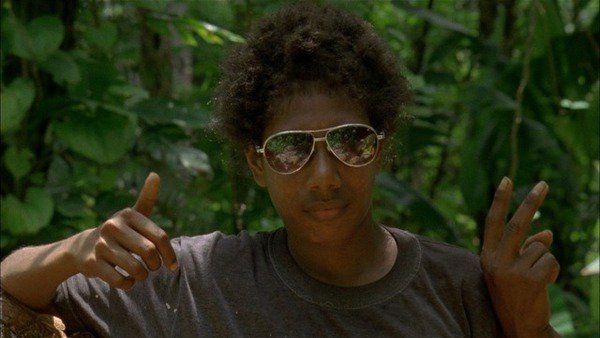 This solo exhibition brings several of Ben Rivers’ works into dialogue with one another, including previous seminal pieces and new films which are being made this year.

Rivers’ practice as a filmmaker treads a line between documentary and fiction. Often following and filming subjects who have in some way separated themselves from society, he creates oblique narratives, imagining alternative existences in marginal worlds. Rivers uses near-antique cameras and hand develops the 16mm film, resulting in films which show evidence of the elements they have been exposed to. The materiality of the medium forms part of the narrative.

For his exhibition at Camden Arts Centre, Rivers is producing two major new film works: the first is developed from a recent trip to the remote sub-tropical island of Tanna in the South Pacific, whose ecosystem has, since his film documentation, been irrevocably devastated by Cyclone Pam; the second a portrait of painter Rose Wylie at work in her studio, reflecting the meeting of two artists and their creative processes.

Alongside his solo presentation, Ben Rivers is curating a group show based on the idea of ‘edgelands’. The artist-curated exhibition will bring together works – such as J G Ballard’s Concrete Island, Helen Levitt’s New York street photos, works by self-taught photographer Ralph Eugene Meatyard, Keith Arnatt’s 'A.O.N.B. (Area of Outstanding Natural Beauty)', and Robert Smithson’s photos and text piece, Tour of Monuments of the Passaic – to explore shared interests in withdrawal from the mainstream social narrative, the peripheries of society and the overlooked fringes of the city.

Curated by Ben Rivers, this group show examines the overlooked fringes of the urban landscape. Based on the concept of ‘edgelands’, the exhibition draws together a selection of works that have inspired Rivers’ interest in these borders of society, both physical spaces – the neglected peripheries of the city – and abstractly, where individuals have withdrawn from mainstream culture.

Self-taught Ralph Eugene Meatyard’s photographs of the American mid-west outback sit alongside La Ville Petrifée by Max Ernst (1933), Catherine Opie’s photographic Freeway series (1994), Robert Smithson’s Tour of Monuments of the Passaic (1967), J G Ballard’s Concrete Island (1974), and others. Together they consider how social distance surfaces in architecture and landscape, the creative potential of overlooked spaces and beauty in the deserted or disregarded.