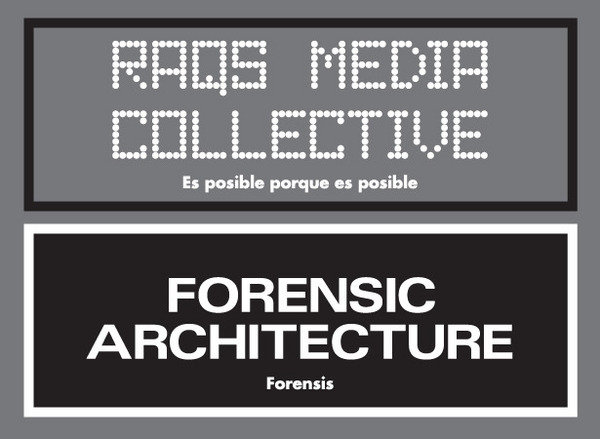 Raqs Media Collective and Forensis reflect widely on notions of the “present”; both groups are interested in using different perspectives to bring awareness to current problems encompassing globalization, cultural differences associated with the economy, global politics, and contemporary subjectivity. The diversity of new artistic practices widens the spectrum of how we think about art.

What does it mean to create images today, and how does history take charge of these images’ meaning in their various forms of production? In what form can art update the tensions that are produced by the “real” in our time? Can an exhibition transform itself into a forum for debate and participation? Can cultural institutions succeed in intervening in contemporary reality? In these two separately conceived exhibitions, Proa presents these questions as a means of strengthening interest in the aesthetic and political processes that accompany artistic research.

For the multidisciplinary group Forensic Architecture, aesthetic work cannot be separated from research, at once generating opposing discussions and politics regarding space, urban fabric, and the means to inhabit them. Making use of satellite maps, photographs, videos, and personal and public archives, they pose unresolved questions for our time. Forensis formulates these discussions to challenge the viewer and offer an active glimpse into cultural and geopolitical conflicts through an aesthetic lens.

Raqs Media Collective analyzes the effects of global capitalism, interrogating the personal and social spheres in which the contemporary unfolds. Raqs proposes a form of imagining in which both the linear organization of the world and the historical absurdity that it signifies are viewed, paradoxically, from the same perspective. The works of Raqs are an invitation to realize, in the face of the prospect of a stable reality, the possibility of imagining new utopian configurations or possibilities.

Both shows are accompanied by parallel series of activities, through which Fundación Proa sets out to revitalize discussions about the “present.”