At once poetic, minimal, and metaphysical, Mircea Cantor's works - be they videos, photographs, drawings, sculptures or installations - have made the artist quite a figure in the new geography of contemporary art. "Je suis innocent" is an opportunity to embrace the entire career of Adel Abdessemed and to glance at a series of his early works, alongside with new productions wich are often monumental in size and of crucial significance. 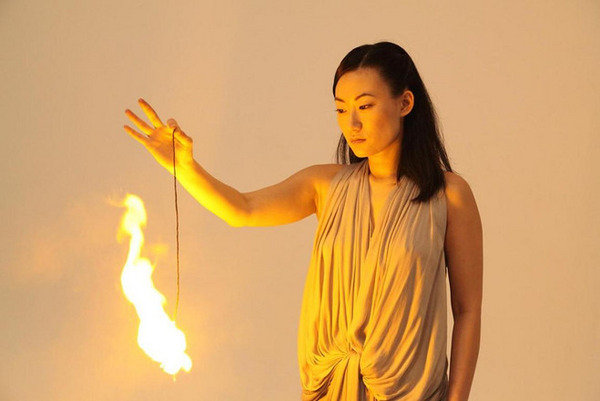 When it first appeared on the art scene around 2000, Adel Abdessemed’s work was perceived as a response to the convulsions of our time, using the language of art to fully capture the sheer energy and violence it has unleashed. In the braided planes of Telle mère tel fils (2008), in the shells of the empty burnt terracotta –cast cars in Practice zero tolerance (2006) or the rows of barbed wire, interspersed with double cutting blades and sharpened points of Wall drawing (2006), the artist makes use of different media in order to render history’s whispered rumors of history’s accidents and the contradictions of our world and turn them into striking images.

And yet the work of Abdessemed is filled with references to the art of the past, from Masaccio to Grünewald, from Goya’s phantasmagoria to the paintings of Géricault. The artist has formed relationship with the history of western art is one of continuity and is clearly part of this cultural context. In the exhibition, this relationship is alluded to by Monsu Desiderio’s painting from 1622, Les Enfers, on loan from the Museum of Fine Arts in Besançon, which triggers disturbing interactions with the iconographic world of Adel Abdessemed.

This exhibition is an opportunity to embrace the entire career of the artist and to glance at a series of his early works, alongside with new productions wich are often monumental in size and of crucial significance. The exhibition sheds new light on the work by focusing on the many levels on which it can be approached from the use of ornaments and stylized play on materials to the dream-like quality of his work and its relationship to the history of past and present times as a witness which has chosen to act rather than to react or simply live in the comfortable seclusion of the art world.

At once poetic, minimal, and metaphysical, Mircea Cantor’s works - be they videos, photographs, drawings, sculptures or installations — have made the artist quite a figure in the new geography of contemporary art. A self-styled rootless wanderer, Mircea Cantor has made himself a name on the contemporary art scene through a series of works so delicate yet guarded, so subtle yet radical, that their material seems to be the very stuff that sensitive dreams are made on.

“Today, one should be wary to speak the language of globalization and pander to global brands but should rather speak a universal language, which is the very opposite. That is exactly what globalization is doing away with.”

Speaking about his works, Cantor also mentions “the need for uncertainty”, because he wants to create pieces that are open to multiple perspectives, multiple readings. Porous, they invite the contemporary world through and feed on reality, on human contradictions, through a discursive process: layers of metaphors that harmonize or clash with each other. The artist brings myths, elements from various ancient cultures, into play, without indulging into nostalgia, but paying attention rather to the enduring signs of the past in the present.

Centre Pompidou
75191 Paris cedex 04
Opening: 11am – 9pm every day, ex. Tuesdays and 1 May
Admission: €11 - €13, depending on time concessions €9 - €10
ticket valid the same day for the Musée national d’art moderne and all exhibitions
Free for under-18s and members of the Centre Pompidou