Comprising more than eighty works, the exhibition features highlights of Guyton's career from 1999 to the present, showcasing the breadth of his work in drawing, painting, sculpture, photography, installation and two new paintings, one of which spans fifty feet in length and is the artist's largest single canvas to date. The show features a dramatic, non-chronological layout in which staggered rows of parallel walls confront the viewer like the layered pages of a book or stacked windows on a computer screen. 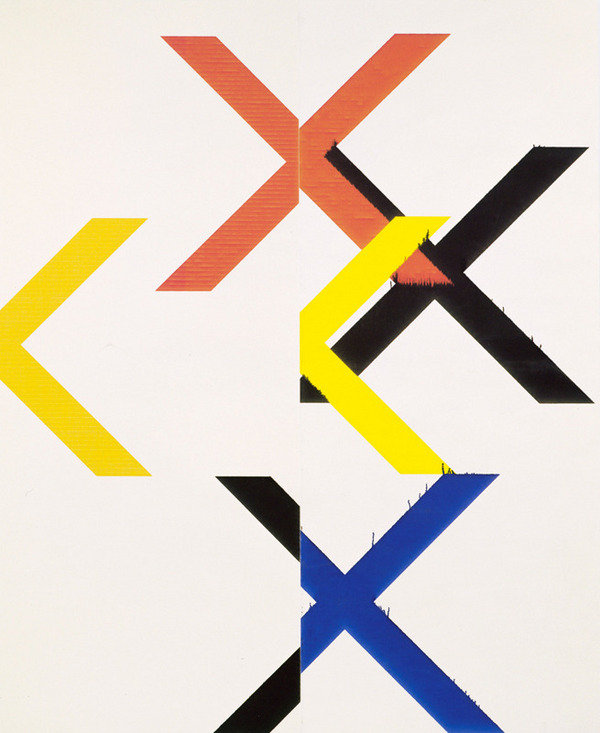 NEW YORK, July 23, 2012 – This fall the Whitney Museum of American Art will present Wade Guyton OS, the first midcareer survey of the influential New York–based artist. Opening October 4, the exhibition will feature highlights of Guyton’s career from 1999 to the present, showcasing the breadth of his work in drawing, painting, sculpture, photography, and installation. Guyton will also premiere two new paintings, one of which spans fifty feet in length and is the artist’s largest single canvas to date. The exhibition is organized by Whitney curator Scott Rothkopf, in close collaboration with the artist, and will occupy the third-floor Peter Norton Family Galleries through January 13, 2013. This is Guyton’s first prominent solo museum exhibition in the United States, and the accompanying catalogue is his first comprehensive monograph.

Comprising more than eighty works, the show will feature a dramatic, non-chronological layout in which staggered rows of parallel walls confront the viewer like the layered pages of a book or stacked windows on a computer screen, twin references to Guyton’s sources and process. Drawing on his flair for installation, this approach will recontextualize more than a decade’s worth of his art with new pieces made specifically for the Whitney’s Marcel Breuer building—a fitting venue given Guyton’s longstanding engagement with Breuer’s work. These large-scale paintings will be exhibited alongside rows of vitrines housing eighty-five of Guyton’s “printer drawings,” while a spectacular installation of more than eighteen mirrored stainless steel sculptures will span the gallery space. The exhibition’s title Wade Guyton OS employs the commonly used acronym for a computer “operating system” and links Guyton’s work to the technological tools on which he depends. The title makes the point that the artist’s body of work is more closely akin to an open-ended system than to a fixed corpus, a point underscored by the exhibition’s highly inventive design.

Wade Guyton OS builds on the Museum’s early commitment to this groundbreaking artist. Guyton was included in the 2004 Biennial, and work purchased by the Museum from that show marked his first entry into the collection of a public institution. The Whitney has since acquired a majestic eight-panel painting that will be a highlight of this show. In 2010, Guyton\Walker, a collaborative team comprising Guyton and Kelley Walker, launched Whitney on Site: New Commissions Downtown, a series of projects on the site of the future Whitney building at the corner of Gansevoort and Washington Streets, adjacent to the High Line.

By showcasing Guyton at this pivotal moment in his development, the Whitney reaffirms its longstanding tradition of championing pioneering artists early in their careers. This survey places Guyton alongside Bruce Nauman, Richard Tuttle, David Salle, Cindy Sherman, and Richard Prince, all of whom were presented in Whitney surveys covering roughly the first decade of their work.

About the Artist
Wade Guyton was born in 1972 in Hammond, Indiana, and now lives and works in New York. Over the past decade he has emerged as one of the most innovative artists of a generation that also includes Rachel Harrison, Kelley Walker, Josh Smith, and Roe Etheridge. During that time, Guyton pioneered a body of work that builds elegantly on key developments in the history of modern and contemporary art through the use of common technologies, such as the desktop computer, scanner, and printer. With these tools, Guyton forges a seamless and eloquent synthesis of diverse mediums and movements within a technical and visual vocabulary that is insistently of our time.

Guyton first gained prominence in the mid-2000s with a group of drawings made by passing pages torn primarily from old art and architecture books through his Epson inkjet printer and marking them with letters and geometric shapes rendered simply in Microsoft Word. In these works, colored bars and disks, muscular Us and Xs, and, eventually, scanned graphics, piled atop images of timber-frame houses, Constructivist sculptures, Persian rugs, and modish interiors through an activity that implies both vandalism and homage. Within each sheet, Guyton suggests his intimacy with and distance from his subjects, as well as the recalcitrance and creeping obsolescence of the printed book in the digital era. At the same time, Guyton questions how an age-old medium such as drawing might itself be redefined intuitively through new means.

Since 2005, Guyton has developed a unique approach to painting by running sheets of primed linen through a large-format inkjet printer to yield a variety of motifs from off-kilter abstractions to fiery emblems. Because the fabric is thicker than the printer’s intended support, it often gets stuck in the machine or causes clogs of ink that result in drips, smears, and striations. Similarly, Guyton’s enlargement or mis-formatting of a digital source file can cause the image to blur or break down as it wends its way from the computer to the printer. He often tugs at the linen or overprints his mistakes; these accidents become a source of painterly interest and a subject of Guyton’s art, poignantly connecting it to our daily lives, now punctuated by jammed copiers and misprinted cellphone photos. In this sense, his canvases become subtle maps of both the failure and possibility inherent in his novel processes—and in all artistic and technological pursuits.

Guyton’s recent paintings have taken on an architectural scale and spatial dynamism, with multiple panels stretching fifty feet wide or twenty-five feet tall. This environmental approach suggests his involvement with Minimal, Conceptual, and installation-based practices, in addition to his creative refashioning of Pop and Pictures-era appropriation. Guyton’s practice also comprises sculptures that extend his graphic interventions into space, as in his series of reflective steel objects in the shape of the letter U and in a group of towering rough-hewn wooden Xs. Other sculptures, such as those made from the bent tubular metal frames of iconic Marcel Breuer chairs, playfully merge the legacies of modern sculpture and design. Examples of these series will be integrated into the exhibition to create a contrapuntal narrative between Guyton’s paintings and drawings and his more insistently three- dimensional work.

In addition to Guyton’s solo practice, he creates work with Kelley Walker under the moniker Guyton\Walker and is a member of the collaborative Continuous Project with Bettina Funcke, Joseph Logan, and Seth Price. Guyton is also a partner in The Leopard Press, a publishing house based in New York.

Catalogue
The exhibition is accompanied by a fully-illustrated catalogue published in cooperation with Yale University Press. The catalogue includes a scholarly overview of Guyton’s career by Whitney curator Scott Rothkopf, as well as an interview with the artist, conducted by Donna De Salvo, the Whitney’s Chief Curator and Deputy Director for Programs. This volume will serve as Guyton’s first comprehensive monograph.

About the Whitney
The Whitney Museum of American Art is the world’s leading museum of twentieth-century and contemporary art of the United States. Focusing particularly on works by living artists, the Whitney is celebrated for presenting important exhibitions and for its renowned collection, which comprises over 19,000 works by more than 2,900 artists. With a history of exhibiting the most promising and influential artists and provoking intense debate, the Whitney Biennial, the Museum's signature exhibition, has become the most important survey of the state of contemporary art in the United States. In addition to its landmark exhibitions, the Museum is known internationally for events and educational programs of exceptional significance and as a center for research, scholarship, and conservation.
Founded by sculptor and arts patron Gertrude Vanderbilt Whitney in 1930, the Whitney was first housed on West 8th Street in Greenwich Village. The Museum relocated in 1954 to West 54th Street and, in 1966, inaugurated its present home, designed by Marcel Breuer, at 945 Madison Avenue on the Upper East Side. While its vibrant program of exhibitions and events continues uptown, the Whitney is moving forward with a new building project, designed by Renzo Piano, in downtown Manhattan. Located at the corner of Gansevoort and Washington Streets in the Meatpacking District, at the southern entrance to the High Line, the new building, which has generated immense momentum and support, will enable the Whitney to vastly increase the size and scope of its exhibition and programming space. Ground was broken on the new building in May 2011, and it is projected to open to the public in 2015.