The exhibition will be a conjectural exploration of American identity politics against the backdrop of this year's political debates. A diorama of the populace using strategically chosen examples of figurative painting, sculpture, and photography. Works from American artists of older generations will be installed in cacophonous dialogue with works by a younger generation of artists. 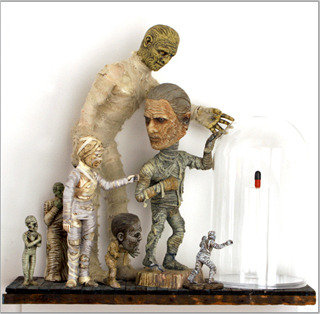 The Robert Rauschenberg Foundation, in collaboration with curator Alison Gingeras and artist Jonathan Horowitz, will mount a show titled We the People, which provides an artistic view of the diverse demographics of our country, in contrast to the taglines and catchphrases of the 2012 election. We the People will run from October 3 through November 9, to coincide with the 2012 presidential election, and will take a close look at who the American people are, as seen through 68 different artists' eyes.

Exhibition Theme- Using the famous first words of the U.S. Constitution as its title, the exhibition explores issues of identity politics, demographic trends, swing-state gaming, and the influence of special interests against the backdrop of this year's political debates. We the People...but just who are the American people? Can we be pigeonholed into categories such as Starbucks Moms, NPR Republicans, America First Democrats, and the Facebook Generation? Can we be reduced to the 99 percent and the 1 percent, or special interests pitted against regular folks? Are we able to define ourselves as red vs. blue states? Does the issue of income inequality translate into class war?

"This exhibition's theme resonates with Robert Rauschenberg's own artistic and philanthropic legacy—the use of art to explore and expose key issues of our time, the power of media and headlines in our society's understanding of itself, and the pulling together of a community of artists as activists to confront those issues," says Christy MacLear, Executive Director of the Robert Rauschenberg Foundation. "In reviewing our archive we extracted Rauschenberg's testimony from the Robert Bork Supreme Court nomination hearings in 1987 where his opening statement included the following thought: 'Democracy is not the product of law; democracy is the need of people to be free in dreams and reality. Controversy is part of creation and changes are essential to current survival nationally, and therefore internationally. The doors of control should be broad minded and wise with experience, compassion and understanding. This, without a doubt, must be the history of the future.' Exploring how one characterizes the American fabric is relevant to understanding the voice and representation of the people. This is a part of Rauschenberg's legacy, as much as being an artist he was a man of the people, in all their diversity."

Each artwork has been chosen to suggest a sociological typology, an electoral demographic, or an actual person that makes up our famous American melting pot. Taking inspiration from the crowded, riotous album cover for Sgt. Pepper's Lonely Hearts Club Band, artworks will be installed in a shoulder-to-shoulder exchange. This hypothetical portrait of America not only provides numerous possible commentaries on the issue of identity, but also questions the very nature of political art itself, as artists and artworks will be included that are not traditionally associated with political discourse.

We the People TV- Politicians and American television networks collect and utilize demographic information in a similar way. Mainstream media and national candidates use their demographic assessments of the American populace as a means to tailor their messages, woo certain groups, and project idealized representations or subjects. In both spheres, viewers and voters are imaginary populations. But even as a demographically engineered construction, these viewer-voters have power if TV ratings and votes are now equal in American identity politics.

The media component of We the People examines this parallel between television audiences and electoral constituencies by exploring the fantasy of watching TV as a form of citizenship. Titled We the People TV, this video program uses the paradigm of the mainstream broadcast television schedule to create an original week of programming. Each day begins with religious programs, then a magazine-style talk show, and continues to follow the conventions of the old-school broadcast television schedule. Since the flow of TV is always interrupted by commercials and other interstitial material, We the People TV includes some iconic examples of these interruptions, and adds into the mix landmark works from video art's long history of questioning the relationship between media and democracy.

We the People will run from October 3 through November 9 at the Robert Rauschenberg Foundation Project Space, located at 455 West 19th Street. The Project Space is open to the public from 11 a.m. to 6 p.m., Tuesday through Saturday, and admission is free.

The Robert Rauschenberg Foundation holds a Project Space on 19th Street in New York City's Chelsea district. The Foundation is testing the use of this space over the next two years with mission based programs which will: exhibit Robert Rauschenberg's less "commercial" work (stage sets, costumes, art + technology); provide space for RRF grantees to extend programs in New York; provide an exhibition venue for the Rauschenberg Residency in Captiva Florida; and stage exhibitions of new generations of artists which support Rauschenberg's legacy of thought and purpose.

The Robert Rauschenberg Foundation is a private foundation established to foster the legacy of the life and work of the artist, as well as to pursue major initiatives and support for fearless, innovative, and multidisciplinary artistic endeavors. In the words of Robert Rauschenberg, the foundation exists to show how "art can change
the world."

About Alison Gingeras: Alison Gingeras is a curator and writer born in New York in 1973. Over the past 15 years, she has held curatorships at the Guggenheim Museum, the Centre Pompidou, and Palazzo Grassi/Punta della Dogana in Venice. During her tenure at the Centre Pompidou, she curated several exhibitions, including "Dear Painter, Paint Me..." Painting the Figure since Late Picabia (2002) and Daniel Buren: Le Musée Qui N'Existait Pas (2002). In 2005, she became curator of the Francois Pinault Foundation and organized the inaugural exhibitions at the Palazzo Grassi, Where Are We Going? (2006), and at Punta della Dogana, Mapping the Studio (2009). Also in 2009, she co-curated the exhibition Pop Life: Art in a Material World, at Tate Modern London. Since 2010, Gingeras has worked as an independent curator in New York and Warsaw. In addition to her curatorial activities, she is also a writer who frequently contributes to magazines such as Artforum, Parkett, and Interview and is a member of the editorial board of the art magazine Tate Etc. She has authored several artist monographs and exhibition catalogues, among them books dedicated to the work of Glenn Brown, Guy Bourdin, John Currin, Jeff Koons, Martin Kippenberger, and Takashi Murakami.

About Jonathan Horowitz: Since the early 1990s, Jonathan Horowitz has made art that combines the imagery and ambivalence of Pop art with the engaged criticality of conceptualism. Often based in popular commercial sources, his work across mediums examines the deep-seated links between consumerism and political consciousness, as well as the political silences of postwar art. Recent solo exhibitions include Minimalist Works from the Holocaust Museum, Dundee Contemporary Arts, Scotland (2010); Apocalypto Now, Museum Ludwig, Cologne, Germany (2009); and the retrospective And/Or, MoMA PS1, New York (2009). This fall, a new installation by Horowitz, Your Land/My Land: Election '12, will be on view concurrently at several institutions around the country, including the New Museum, New York; the Contemporary Art Museum Raleigh, North Carolina; the Contemporary Art Museum St. Louis, Missouri; Contemporary Arts Museum Houston, Texas; and the Utah Museum of Contemporary Art.

About Anna McCarthy: Anna McCarthy is a professor of cinema studies at NYU and co-editor of the journal Social Text. In addition to her books Ambient Television (2001) and The Citizen Machine (2010), her writings on film, television, and other media have appeared in a diverse range of publications, among them October, The Journal of Visual Culture, The Nation, Social Text, and Interview. She is currently collaborating with newspaper historian Aurora Wallace on a book about the contemporary idea of content, as in content creators, content providers, content industries, content farms. Based on a series of creative experiments with the inner workings of the digital content market, the book asks what the rise of this universal cultural commodity we call "content" means for writers and artists, and for the publics to whom they speak.