Artists from Aotearoa/New Zealand.The exhibition title derives from a 1974 performance by Jim Allen at Auckland Art Gallery that was based on a broad definition of 'contact' as a mental, physical, and social interdependency and reflects a time in which New Zealand artists sought various paths to confront the past and its cultural context. 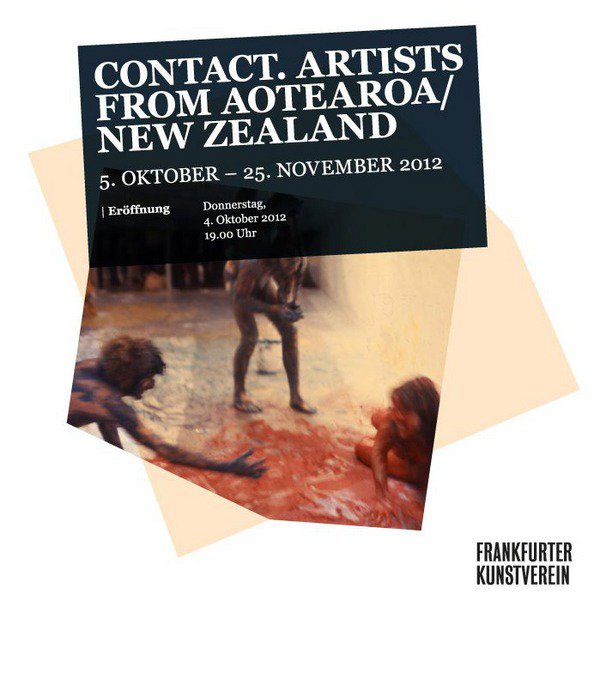 On the occasion of the participation of New Zealand as Guest of Honor at the 2012 Frankfurt Book Fair, Frankfurter Kunstverein presents the group exhibition CONTACT. ARTISTS FROM AOTEAROA/NEW ZEALAND. The title derives from a 1974 performance by Jim Allen at Auckland Art Gallery that was based on a broad definition of “contact” as a mental, physical, and social interdependency and reflects a time in which New Zealand artists sought various paths to confront the past and its cultural context. “Contact” refers to the interrelationship between the two dominant ethnicities in bicultural Aotearoa/New Zealand: the indigenous Māori and the white settlers, “Pakeha.”

The exhibition at Frankfurter Kunstverein unites paintings, photography, films, and installations by 25 New Zealand artists, creating a complex portrait of artistic production in the last forty years in Aotearoa/New Zealand. It offers a multifaceted perspective on a highly active and heterogeneous artistic scene within the context of contemporary discourse.

New Zealand was and is a country in which diverse cultural influences manifest themselves in numerous ways. Some 850 years ago, Polynesian seafarers settled on the South Pacific islands where previously only birds, reptiles, and insects had lived. In the late 18th and early 19th centuries, the descendants of these explorers, today’s Māori, were faced with an increasing number of primarily British settlers. They signed the Treaty of Waitangi in 1840, which promised the Māori sovereignty over their land and at the same time established the supremacy of the British Crown. This treaty, whose original exists only as a fragment, forms the basis of the bicultural identity of New Zealand, which has been official policy since the establishment of the Waitangi Tribunal in 1975, and which is still much debated today. Several new immigration waves from European countries, the Pacific Islands, South Africa, Black Africa, Asia, and the Arab region, challenge the previous agreement of biculturalism with a multicultural reality that is still being negotiated, sociologically, theoretically, politically, and practically. Especially in the Auckland metropolitan area, this conflict has led to segregation, ghettoization, gated communities, violence, and crime.

Well into the middle of the 20th century, Great Britain dominated New Zealand not only politically, but also artistically. It was only in the 1960s that painters such as Colin McCahon and Gordon Walters looked to North American art alongside that of the European continent and returned to New Zealand with modernist ideas. Other artists were like Len Lye, a pioneer of abstract film, who left his homeland early on and was fully disregarded until the 1980s. For Jim Allen (* 1922, Wellington), his travels to France, Great Britain, the United States, and Mexico signaled turning points in his artistic practice. In Paris, London, Chicago, and New York he was witness to student revolts; in Mexico he became acquainted with the work of Hélio Oiticicas, whose Parangolés he referenced in one part of the three-part performance at Auckland Art Gallery in 1974. As the most important exponent of Post-Object Art and a teacher at Elam School of Fine Arts in Auckland, Allen has considerably influenced later art scenes, including video and sound artist Phil Dadson (* 1946, Auckland). Dadson is represented in the exhibition with a documentation photograph of an action piece from 1971, in which he and some friends sweep a beach on the country’s west coast—unaware of the artist Josef Beuys and his own action piece in the Krefeld Forest from the same year.

The fundamental paradigm of contact in a country like New Zealand, which has been so strongly affected by the postcolonial debate, is the “first contact,” that often baneful encounter made by an indigenous population with its European settlers. This encounter, oscillating between uncertainty, condescension and respect, pride, sadness and aggression, is the subject of the multi- part video Native Portraits (Drama) by Lisa Reihana (* 1969, Ngā Puhi). New technologies and old myths intertwine in the works of Rachael Rakena, while Francis Upritchard creates new hybrid forms with reinterpretations of historical objects. The issues of a multilayered, multicultural society in the wake of the influx of immigrants from the Polynesian Islands as well as fates of lives in exile are reflected in the photographs of Edith Amituanai. CONTACT presents not only artistic confrontations with socio-cultural conflicts in contemporary Aotearoa/New Zealand, but also offers poetic approaches to the subject, such as in the works of Dane Mitchell, or the site-specific installations by John Ward-Knox. Artistic methods and processes by painters such as Judy Millar, who alongside Francis Upritchard represented New Zealand at the Venice Biennale in 2009, or Simon Ingram, who in his Automata Paintings elevates programmatic processes devoid of subjective intervention to works of art, expand the exhibition concept.

“Contact. Artists from Aotearoa/New Zealand” was made possible by Manatū Taonga – Ministry for Culture and Heritage, Wellington and Creative New Zealand. It is supported by Goethe Institute.