Exercise Blackbird. Monteith's films mirror the liberties enjoyed by modern society while also drawing attention to the limitations of human action in coming to terms with geographic, environmental or territorial situations and conflicts. 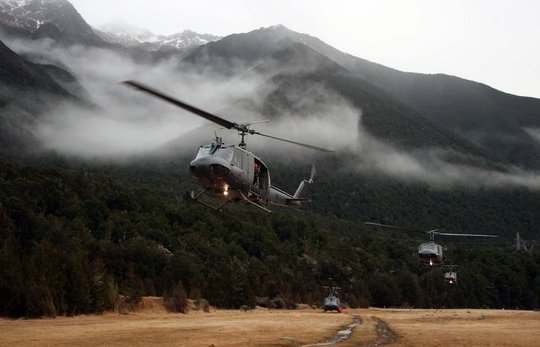 The films and film installations by the artist and director Alex Monteith of New Zealand are characterized by a strong visual and poetic language of remarkable compositional clarity. As seen in her films on motorcycle racing, surfing and aerobatics, her works revolve around the themes of speed, endurance and high performance.

The MMK will present the three-channel video installation "Composition with RNZAF 3 Squadron Exercise Blackbird". This large-scale installation conveys a very real sense of being in a helicopter and flying thunderously over the snow-covered alpine landscape of New Zealand’s South Island. On three helicopters forming a squadron, the artist mounted cameras pointing backwards. The three projections initially differ from one another slightly, creating a sense of disconcertion in the viewer. Above the deafening sound of the helicopters, the voices of the pilots communicating by radio can be heard, making the scenes reminiscent of a military campaign.

Preview of the exhibition on Tuesday, 2. October at 11 am. The artist Alex Monteith will be present.

The exhibition opening will take place at the MMK on Thursday, 4 October at 6pm.