Feminite sans tabous. I decided to explore the memories of my childhood because that allowed me to understand who I am and to define my current identity. (...) Each picture tells its own story and raises a veil on the past. 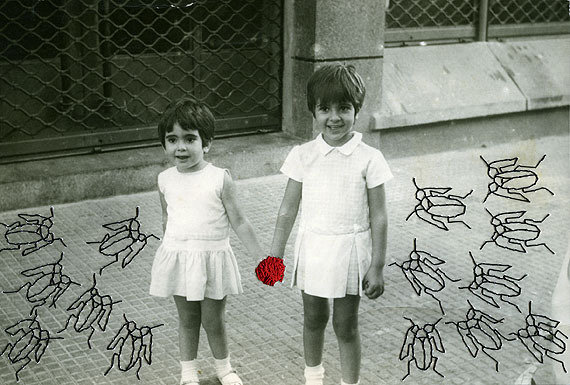 I started to be interested in my family pictures when I was leafing through my family album and found myself overwhelmed by an unexplainable emotion. These photographs were taken forty years earlier, and I could not even remember the moments they were shot, nor what preceded or followed those moments. But the photos reawakened an anguish of something both familiar and totally unknown, the kind of disquieting strangeness that Freud spoke about. Those moments, fixed on paper, represented me, spoke about me and my family, told things about my identity, my place in the world, my family history and its secrets, the fears that constructed me and everything that constitutes me today.

I decided to explore the memories of my childhood because that allowed me to understand who I am and to define my current identity.

To begin, I carry out ‘excavations’. Like an archaeologist, I dig out the pictures in which I appear from the family albums and the shoeboxes full of photographs. I choose snapshots, because they are related to memories and to loss. These photographs are fragments of my past. I interpret them in a subjective perspective as confessions. I order them, classify them, scan them, then I print them. I don’t do anything directly on the original photo; I transpose this reality on a different paper. Sometimes I crop a detail that calls out to me, and I choose my format. The work of interpretation begins with these steps.

Once these choices of images are made, I start to tell my version of the story. I turn my attention to my own history, sometimes with 40 years of distance and the life experiences that changed my perception of events. The past of a human being, unlike the remains of an antique temple, is neither permanent nor finished but reconstructed in the present time.

As the next step, I add needlework: embroidery and beads. Embroidering is primarily a feminine activity. In the past, the embroiderer was seen as a paragon of virtue. Waiting was tied to this activity: women embroidered, hoping for the man to return home. Embroidery is intimately linked to the milieu in which I grew up. Girls in a ‘good family’ used to learn how to sew and embroider – essential activities for ‘perfect women’. My mother embroidered her trousseau. There is nothing subversive about this activity, but I pervert it with my words. I use its decorative function to re-interpret my own history and to expose its failings. The two activities – interpretation and needlework – come together again in a kind of dispute: embroidery is the sign of good education, and the words that I speak don’t show me to be what I was supposed to be: a well behaved girl, a wise spouse and a loving mother.

With each stitch, I make a hole with a needle. Each hole means putting my demons to death. It’s like an exorcism. I make holes in paper until it does not hurt me anymore.

Each picture tells its own story and raises a veil on the past. The project is a story about revelation. It is a work related to emotion. For example, in one picture, I relate my personal story to “Little Red Riding Hood”, the story of a little girl swallowed by a wolf. We are here, in a transgressive story, in marked out paths not to be trespassed, in disobedience. I talk about childish fears. In another, I embroidered cockroaches which invade the space but they have angels’ wings and the fraternal links protect me and save me.

I use the red thread which is my vital lead. It leads me to the maze of my past history. Red is the colour of violent emotion, it is the colour of blood, of bad blood. It’s also a colour related to sexuality. The beads I use are chosen for their sheen and their fragility to stress the decorative side and create a gap. I utilize a traditional gesture in this step and it is linked to my previous occupation as a fashion designer. The work now becomes a three-dimensional piece of art.

The writing comes in, too. It’s like a key to unlock the mystery. The sentences are thought or said, like automatic writing.

This precise and slow process is a metaphor for the work of making oneself and for the passage of time.