Why does Gregor never rings? shut your lips, somewhere under that bridge lies the hole truth... The artist presents the fifth sequence of her ongoing project, The Wanderer, made up of a full-length feature film and seven gallery installations. 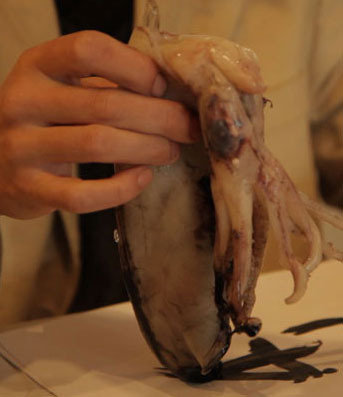 Why does Gregor never rings? shut your lips, somewhere under that bridge lies the hole truth...
(THE WANDERER SEQUENCE 5)

For her second exhibition at MOTINTERNATIONAL, Laure Prouvost presents the fifth sequence of her ongoing project, The Wanderer, made up of a full-length feature film and seven gallery installations. The film exists as a seven part sequence that has been developed from an intuitive German to English translation of Kafka’s novella Metamorphosis. Between the two languages the original narrative becomes transformed, if not lost, in its translation. Throughout The Wanderer Prouvost’s protagonists, undergo a series of increasingly bizarre experiences, in which reality disintegrates around them. Combining everyday footage with staged interludes, the film’s plot is constantly undermined by the disparate audio and visual elements with which it is juxtaposed.

The narrative of sequence five takes place in an underground bunker, reminiscent of the cold war era, where the characters and their surrounding environment are literally turned upside down. With a heightened sense of awareness and a constantly ringing telephone, the characters converse in a surreal, faux military dialogue. Their objective is to locate Gregor, the film’s elusive protagonist. Between fragmented exchanges and tangled mappings the characters are lost in an over-communicative mix of past and present, reality and falsehood.

The film is installed amongst new shadow drawings and hanging sculptures which both reflect the ongoing action in the film, whilst providing a new reality in which to view her artworks. Laure prouvost’s practice is characterised by her subversion of the narrative tropes of filmmaking. Drawing viewers into seemingly personal stories, heightened by her use of handheld cameras and whispered voiceovers, their truth status is quickly undermined by surrealist interjections of image and text which insistently challenge our ability to piece together narrative elements.Within Provosts' installations these tropes spill out of the cinematic language, flowing into her sculpture and painting.

In 2011 Prouvost was awarded the Max Mara Art Prize for Women in conjunction with Whitechapel Gallery (London) where she will have a solo exhibition in 2013. She has exhibited extensively in galleries and museums throughout Europe and the US, including presentations at CCA, Glasgow (2012) Portikus, Frankfurt (2011), Extra City Kunsthal, Antwerp (2011), National Centre for Contemporary Art, Moscow (2011) and Tate Britain, London (2010). She has also screened work in film festivals internationally and won the Principal Prize at both the 56th and 57th Oberhausen Film Festivals.

"The Wanderer" was commissioned by FLAMIN Productions through Film London Artists' Moving Image Network with funding from Arts Council England.