Ends of the Earth

Land Art to 1974. The time period covered spans the 1960s to 1974, when, in the context of Land Art, movements such as Conceptual Art, Minimal Art, Happenings, Performance Art, and Arte povera, became more distinct and began to diverge. The nearly 200 works by more than 100 artists from Australia, Brazil, Canada, Germany, Great Britain, Iceland, Israel, Japan, the Netherlands, the Philippines and Switzerland demonstrate that Land Art was not a predominantly North American phenomenon. 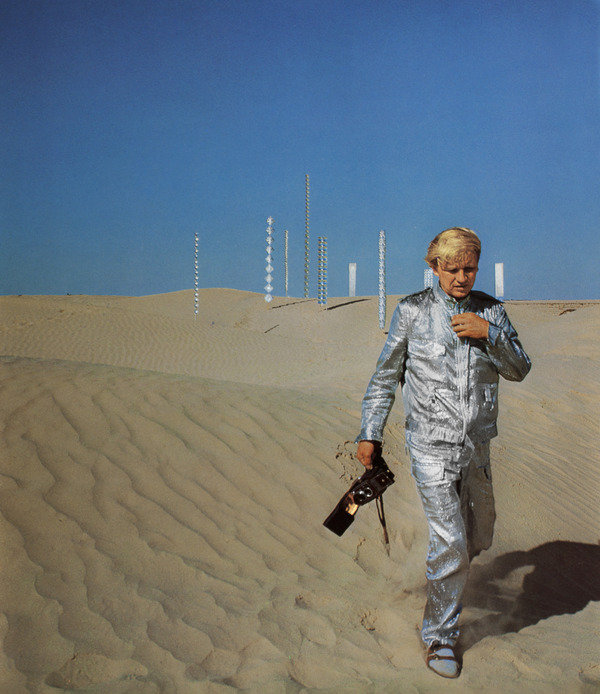 As the first major museum exhibition on Land Art, "Ends of the Earth" provides the most comprehensive historical overview of this art movement to date. Land Art used the earth as its material and the land as its medium, thereby creating works beyond the familiar spatial framework of the art system.

The time period covered in "Ends of the Earth" spans the 1960s to 1974, when, in the context of Land Art, movements such as Conceptual Art, Minimal Art, Happenings, Performance Art, and Arte povera, became more distinct and began to diverge.

The nearly 200 works by more than 100 artists from Australia, Brazil, Canada, Germany, Great Britain, Iceland, Israel, Japan, the Netherlands, the Philippines and Switzerland demonstrate that Land Art was not a predominantly North American phenomenon. The exhibition presents works that are less well known than the canonical works "Spiral Jetty", "Lightning Field" and "Double Negative", thereby creating a shift in perspective.

By including works of the then-participating artists, the show refers to the earlier and pioneering exhibitions "Earthworks" and "Earth Art" (New York, 1968 and 1969). Michael Heizer and Walter De Maria are interested in realizations in outside and lend the mediated part within an exhibition only secondary importance. They are, therefore, not included in this presentation.

Even before the emergence of the movement in the 1960s, artists from the most varied locations around the globe were increasingly moved to claim the earth and use land as an artistic medium. In a basic sense, this also included the examination of the nature of the earth as a planet. Yves Klein, for instance, wondered what the earth looked like from space. In 1961, he transformed his vision that the dominant color from this perspective would be blue, and that all man-made boundaries could be overcome with this color, into his series "Planetary Reliefs."

Land Art artists often worked under the open sky, making productive use of the fact that the great outdoors posed other conditions for a work's lifespan than enclosed spaces did. Some works only existed for the short time of their creation, like Judy Chicago's ephemeral works consisting of colored flames and smoke, which served as references to religious ceremonies and the landscape as a deity. For ten weeks, the cliffs along Little Bay, Sydney, were packed in synthetic fabric and rope for Christo and Jeanne-Claude's "Wrapped Coast - One Million Square Feet", which, like many other works of Land Art, was enormous in scale. Another famous work of similar proportions was "Spiral Jetty" by Robert Smithson; on the Great Salt Lake in Utah, USA, the artist built a 1,500-foot long spiral-shaped jetty made of material found on site.

Land Art artists were fascinated by remote locations like deserts. Hreinn Fridfinnsson constructed a house on an uninhabited lava field near Reykjavik. The inside was made of corrugated sheet metal and the outside was covered in wall paper, because, as wall paper is intended to please the eye, "it is reasonable to have it on the outside, where more people can enjoy it." Some artists transported the conditions of specific places into exhibition spaces: The Japanese artist group "i" moved four truckloads of gravel on a conveyor belt into an exhibition space and arranged it into a pile there. Alice Aycock fills a minimalistic grid with wet clay. This work will be recreated for the exhibition in Haus der Kunst; the clay will dry out during the run of the exhibition, will crack and gradually come to resemble the land in California's Death Valley (Clay #2, 1971/2012). With "Hog Pasture: Survival Piece #1" (1970-71/2012), not only will new material - in this case a green pasture - make on selected occasions its way into the museum but a live domestic pig as well, which will pasture on the meadow from time to time.

From the earliest days of the movement, collectors, patrons, art dealers, and curators also explored sensitively which works of Land Art could be exhibited in museums and galleries, and how this should be done. In their own way, they helped establish Land Art as a legitimate artistic genre. In the case of Robert Smithson's "Spiral Jetty" an art dealer helped funding the production of an accompanying film, and the work was executed in three equally valid versions: as the site-specific headland, as an eponymous essay and as a film.

In general, language, film, and photography played a central role in Land Art's creation and development. Land Art artists and members of the media established close connections to one another. Magazines and television stations commissioned art works and were the first to publish these. Now legendary is Gerry Schum's "Fernsehgalerie", which was the first exhibition created for television and was broadcast by Sender Freies Berlin on 15 April 1969. For eight consecutive days in October of that same year, the WDR television network interrupted its regularly scheduled programs, at 8:15 pm and 9:15 pm, for a few seconds and presented the eight photographs of Keith Arnatt's "Self-Burial", which depicted the artist gradually sinking into the ground. The television station refrained from accompanying this with an introduction or commentary. Following the presentation of Tinguely's self-destructing sculpture "Hommage à New York", the NBC television network commissioned the artist to create a work. In collaboration with Niki de Saint-Phalle, Tinguely made a large-scale kinetic sculpture out of waste material he had found in and around Las Vegas. The work was used in choreographed explosions that took place south-west of Las Vegas near a nuclear test site. Tinguely's spectacle was presented in the same newscast as was a major report about the international nuclear talks, which took place that same week.

Many other works touched on the subject of "this tortured earth", as Isamu Noguchi described it. Land Art artists examined the wounds and scars that humans inflict on the planet earth, whether by the war machinery (Robert Barry, Isamu Noguchi), dictatorships (Artur Barrio), nuclear testing (Heinz Mack, Jean Tinguely, Adrian Piper) or colonization (Yitzhak Danziger). The media's intensive coverage of Land Art activities led to unusual and complex contributions. Receptive to Land Art's demand for a sensitive consciousness regarding the conditions of production, presentation and dissemination of art, they also gave expression to the technological, social and political conditions of the time.

Organized in collaboration with the Museum of Contemporary Art in Los Angeles.