The Giuliana and Tommaso Setari collection

Behind closed doors again. What began 30 years ago, in 2001 led to the Dena Foundation for Contemporary Art. While international in flavour, the Setari collection gives emphasis to Italian artists from the 1960s to the 1980s and now a younger generation. For this occasion the Foundation presents a selection of reviews and structures led by independent artists. 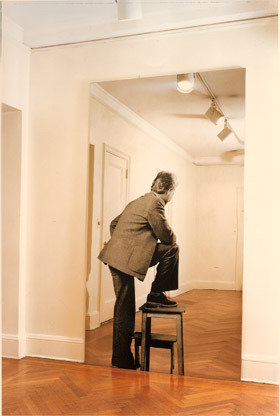 La maison rouge continues its cycle of exhibitions showing private collections and presents, from October 20th, the collection of Giuliana and Tommaso Setari.

This new stage in a journey which since 2004 has taken the public through different attitudes and ways of collecting is a step off the beaten track. The ninth collection to be shown, its identity is all the more powerful for its intimate dimension, a collection that is part of a home. More than anything, it is the attitude it reveals towards art and artists that appealed to la maison rouge.

Far removed from the global, speculative circles of contemporary art, since 1980 the Setaris have made their support of working artists a part of their lives. In the 1990s, Giuliana Setari gave her support to Vettor Pisani's total artwork project, the Virginia Art Theatrum (Museum of Catastrophe), "the philosopher's house" installed in an abandoned quarry which she acquired for the artist in Tuscany. She is also actively involved in the Cittadellarte, Pistoletto Foundation, which she has presided since 1998.

What began thirty years ago as an informal and occasional endeavour, as and when opportunities arose, in 2001 led to the Dena Foundation for Contemporary Art, a private, non-profit foundation to support young artists. The Foundation, which is based in Paris, proposes grants and residencies for artists and curators in Paris and New York, presents an international award, supports exhibitions and publications, and hosts events.

La maison rouge and these Italian collectors first met in the early 2000s, when they were invited to show the entrance to their Paris apartment in la maison rouge's first exhibition, L'Intime, Behind Closed Doors, in 2004. This affinity has grown ever since and now takes the form of this solo presentation of the couple's collection.

The Setari collection echoes the couple's life story, and the many places they have lived: Brussels, New York, Rome, Capri, Milan and finally Paris, where they settled in the early 2000s. Wherever in the world they have been, living with art in their home, and contact with artists, have become essential to their existence.

Alongside this showing of the Setari collection, la maison rouge has given the Dena Foundation carte blanche to present young Italian artists through a selection of reviews and structures led by independent artists. They play a vital role in keeping Italy's contemporary art scene thriving, after recent years of neglect by public institutions.

Within a space inside la maison rouge, surrounded by the exhibition of the Setari collection, the Dena Foundation for Contemporary Art asked Chiara Parisi and Nicola Setari to propose a presentation of the Italian art scene today. Italy's contemporary art scene is rebellious and unpredictable. Attitudes are remarkable, powerful, but also astonishingly radical and poetic.

A "national" approach could not convey its full diversity, hence Le associazioni libere takes a different angle. It invites independent, artist-led structures and reviews to show this diversity and alternative projects happening alongside or concomitant to Italian public and private initiatives, and to present their idea of what art can be in a non-institutional context.

With artistic coordination by Francesca di Nardo, this project shows one aspect of Italian contemporary creation, seen through some of the alternative vectors set up over recent years, and through multiple and ambitious editorial slants: as many representations of curatorial and artistic practices spread throughout the country.

All these initiatives - with their various ideological and political frameworks, often pursuing very different strategies to survive, some digital, some in print - stand out as a possible heritage left to society by Arte Povera, a movement that reawakened our sensibility by expanding the artistic sphere and practices. Lucie Fontaine in Milan, Cripta 747 which started out in Turin, and Cherimus in Sardinia are just three of these artist-run alternative venues. Among the reviews, Mousse and Kaleidoscope in Milan, Cura, Nero and Artribune in Rome are examples of the intellectual and editorial outpouring behind this renewal.
Thanks to an international connection and unfailing solidarity, Italian artists worldwide who identify with these reviews and structures are demonstrating amazing vitality.

Established in 2001 by Giuliana Carusi Setari, from its offices in Paris and New York, the Dena Foundation for Contemporary Art promotes and develops synergy for Italian artists. Alongside the presentation of the Setari collection, the project at la maison rouge celebrates the inventiveness and creativity with which Italian art expresses its response to all forms of crisis, whether political, ideological, intellectual or indeed artistic.

Curated in close consultation with the structures, reviews and in particular artists Diego Perrone and Christian Frosi, who based their design for the exhibition on their first-hand experience of these systems, the project shows recent works and special commissions.

Thursday November 29th at 7pm
Round table on the young Italian art scene (participants to be confirmed)
Thursday January 10th 2013 (to be confirmed)
Launch of volume 6 in Davide Bertocchi's Top 100 project.
Top 100 is a series of compilations of the 100 favourite songs of 100 people on the contemporary art scene.
Volume 6 is a special release that links with the exhibitions of the Giuliana and Tommaso Setari collection and of the Dena Foundation project for young Italian art.

Focus on an artist in the Setari collection
An art critic or historian looks at an artist in the Setari collection, with an observation of the work and an informal discussion over coffee and a scone.
Sunday November 18th at 11am
Sunday December 16th at 11am
Sunday January 6th at 11am
Dates subject to modification – Advance bookings only: reservation@lamaisonrouge.org