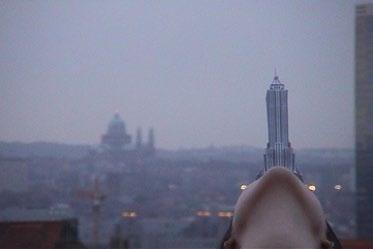 curate by Kevin Muhlen with Mirjam Bayerdörfer and Isabelle Henrion

During three months, fourteen artists, having direct or indirect ties with Luxembourg, are being invited to transform the Casino Luxembourg into a field of creation. The art centre will temporarily abandon its role as an exhibition space to focus entirely on experimentation. The Casino Luxembourg will do justice to its designation as a forum, a place where art lives on a daily basis, as much through the projects that will take shape over the weeks as by the discussions and other forms of reflection about contemporary creation in Luxembourg.

InfoLab
All the information on the artists participating in Making of is available for consultation in the various areas of the Casino Luxembourg. In the framework of Making of, which is part of the Atelier Luxembourg project, documentation on Luxembourgish artistic creation from 1995 to the present day offers a plethora of information, and documents on the subject (artists, institutions, galleries, associations, salons, art prizes, biennales, art in public areas, etc.). Audiovisual archives have been compiled with the help of RTL Télé Lëtzebuerg and radio 100.7. The documentation can be consulted in the entrance hall of the Casino Luxembourg.
As well as the dossiers and publications on the Luxembourgish artists, a selection of national and international artists' books is presented at the InfoLab.

ca(fé)sino
Temporary café-bar at the Aquarium within the frame of the project Making of.
Situated at 7, rue du Nord, at the heart of Luxembourg-ville, the Konrad Café & Bar is, above all, very much appreciated by coffee lovers. As well as the wide variety of coffees and drinks on offer, the café-bar specialises in home-made meals, made up of fresh, seasonal ingredients, which is mainly organic produce (as much for drinks as for dishes) from the surrounding area.
From 15 September 2012, the Konrad Café & Bar is in the Casino "Aquarium" in Luxembourg. Under the name of ca(fé)sino by Konrad, the café-bar offers artists and visitors bites to eat, drinks, as well as coffee. What's more, it's a place for exchange and meeting people. What makes the Making of project special - artists working onsite, the opening of the venue to the public up until 11 p.m., the cultural interactive programme on offer, especially the Stamminee series - means the existence of a friendly, informal venue is absolutely necessary.
The furniture in ca(fé)sino by Konrad was designed by LesAteliers.lu. There are a variety of pieces, such as benches, chairs and stools, as well as tables and a counter, which lends the Casino Luxembourg "Aquarium" a relaxed atmosphere which invites you to linger.
For the duration of Making of, the opening hours have been modified. The new opening hours are for the exhibition and the café-bar ca(fé)sino by Konrad:
daily from 11 a.m. to 11 p.m.; Saturday and Sunday from 11 a.m. to 6 p.m. (closed on Tuesday).
Free entrance.