Using collage and decollage, Bradford preserves the physical characteristics of his source material, exposing the tension between precise painterly gestures and the three-dimensionality of the found objects. 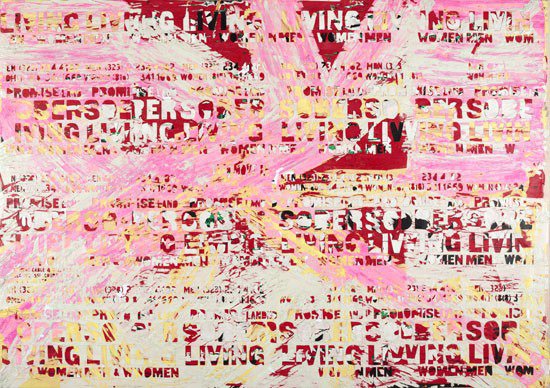 Sikkema Jenkins & Co. is pleased to announce an exhibition of new works by Mark Bradford on view from October 27 – December 15. The show will be Bradford’s third solo exhibition at the gallery.

The exhibition will feature Bradford’s large-scale paintings, recognized for a complex abstraction of form and intricate layering. Using collage and décollage, Bradford preserves the physical characteristics of his source material, exposing the tension between precise painterly gestures and the three-dimensionality of the found objects. Many canvases resemble roadmaps or aerial views— topographies of the city’s physical landscape as well as its social, economic, and cultural character.

Mark Bradford was born in 1961 in Los Angeles, where he continues to live and work. He received both his BFA (1995) and his MFA (1997) from the California Institute for the Arts. He is the recipient of numerous awards including a MacArthur Fellowship Award (2009), the Bucksbaum Award for his contribution to the Whitney biennial in 2006, and the Louis Comfort Tiffany Foundation Award (2003). Bradford’s mid-career survey exhibition concluded its tour at the San Francisco Museum of Art and Yerba Buena Center for the Arts earlier this year.

The show was organized by the Wexner Center for the Arts in Columbus, Ohio where it premiered in 2010. It also traveled to the Institute of Contemporary Art (ICA), Boston; Museum of Contemporary Art (MCA), Chicago; and Dallas Museum of Art. Other recent solo exhibitions include With That Ass, They Won’t Look at Your Eyes, Stanlee and Gerald Rubin Center for the Visual Arts at the University of Texas at El Paso (2012); Mark Bradford, Nasher Museum of Art at Duke University, Durham (2012); and The Pistol That Whistles, White Cube, London (2010).