Paolo Grassino's 'Analgesia_Nero': in the first room the public come across a macro sculpture where a herd of black dogs without ears or mouths appears to be guarding an abandoned mound of wooden pallets, creating a wall to separate and divide. 'Temperated Gardens' is the first solo show of the artist duo Martine Feipel & Jean Bechameil in Berlin. 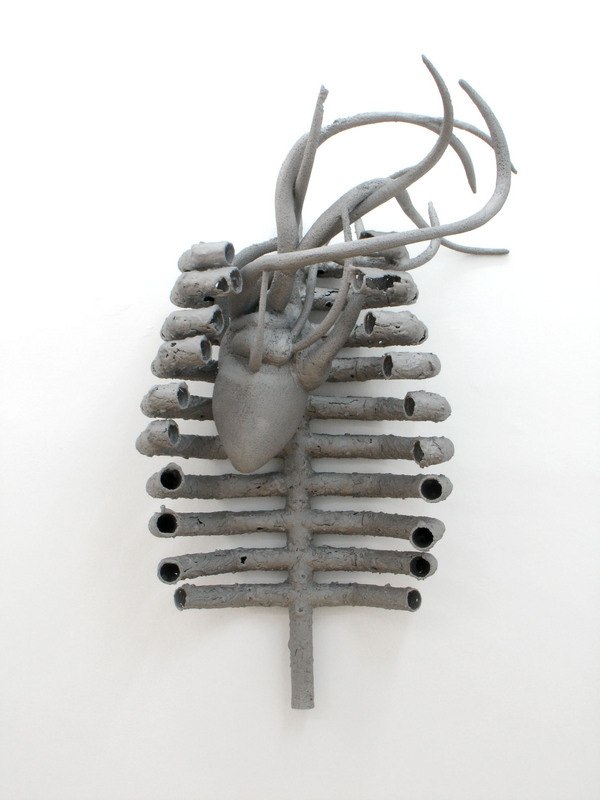 Galerie Rolando Anselmi takes great pleasure in hosting Analgesia_Nero, the first solo show of the artist Paolo Grassino in its space in Kreuzberg. In the first room the public come across a macro sculpture where a herd of black dogs without ears or mouths appears to be guarding an abandoned mound of wooden pallets, creating a wall to separate and divide. They have lost the senses and their only aim is to defend the ground with their physically presence, waiting for a threat that will never come. This scene might be a wake-up call, a prophecy of a future when the remnants of our civilization are recuperated and guarded by nature again. Analgesia is literally the alleviation or the absence of the sense of pain without loss of consciousness. The artist incites us to reflect on our own position and on how we're inclined to remain in our comfort zone of consumerism that obscures our awareness of the alarming situation we're actually in. Behind the wall we encounter a group of sculptures realized by the artist in the last years, such as Trappola (2008) and Travasi (2007). With his skillfully worked sculptures, which are made by different material such polystyrene covered with synthetic sponge, resin, concrete and aluminum, Grassino traces the possible boundaries of a complex and oneiric narrative reflection on the political and cultural conditions of mankind and modern society.

Paolo Grassino was born in Turin, Italy, in 1967. With his work offers a thought on the drift of the modern society, suspended on the edge between natural and artificial. His work is moreover a research that regains the fullest sense of manual skill: Grassino cut strips of synthetic rubber with which he covers the iron, wood and polystyrene skeleton of his sculptures. With a slow and patient weaving work the artist brings his work to a spectacular level. He has exhibited in many private galleries in Italy and abroad, in many museums and in national and international institution such as Castello di Rivalta (2010), RISO Museum of Palermo, Palace Bricherasio Foundation in Turin (Armilla, 2005, curated by Guido Curto), the Modern and Contemporary Art Gallery of Turin (Mangiami, 2000, curated by Elena Volpato) and Palazzo della Regione, in 1991, with a solo exhibition, curated by Luca Beatrice. His work has been featured also at Castello di Rivara-Center of Contemporary Art in Turin, at the Musée d’Art Moderne de Saint-Étienne, at the New Orleans Museum of Art, at the Pistoletto Foundation of Biella, at the Center for Contemporary Art Luigi Pecci in Prato. In 2011 his work was exhibited at MACRO Museum of Contemporary Art of Rome, at Moscow Biennial and in 2012 at Beufort Triennial in Ostende, Belgium and Foundation 107 in Turin, Italy.

Galerie Rolando Anselmi is delighted to announce 'Temperated Gardens', the first solo show of the artist duo Martine Feipel & Jean Bechameil in Berlin. The exhibition will figure two of their early major works: Bechameil's 'Dust Mountain' and Feipel's 'The End and the Beginning', reimagined together for the spaces of the gallery to form a completely new installation.

Both works deal with the notion of time related to a story of evolution. 'Temperated Gardens' shows us a world in permanent evolution and movement, suspended in time. It reveals a garden just before or just after the stroke, an accident or a catastrophe, in a delicate moment of transition and change.

The artists are familiar in questioning space and time through experimentation with media and material, disorienting the viewer's perception. Theirs is an invitation to analyse the passing of time through the continuing changes of worldly things and shapes. The objects are somehow suspended in a precarious balance. 'Temperated Gardens' happens after the eclosion, when a new life starts to bloom and another disappears. It's a story of origins, a myth that purports to describe the fundamentals of natural and human phenomena, exploring the reality of the physical and the importance of the material and the temporal, in our experience of life. But there is no right answer; there is no interpretation key.

We approach the works of Martine Feipel and Jean Bechameil in a dreamy vision, in an oneiric state of excitement, where landscapes are abstract and draw seismic maps on the walls and on the massive table placed in the middle of the room, revealing an inner life. The works capture a moment in which something appears to be suspended, hanging in immobile freeze frame. They are well dealing with the space by taking over the existing floor, walls, and objects, by transforming them and let them tell their own story, releasing them from pressure and restraint. They form cracks and stretches, loosening it up, to finally let a new life begin. The installation, in its totality, challenges the viewer, who is made to deduce what is still hidden, but is secretly growing underneath.

Martine Feipel was born in Luxembourg (L) in 1975. She studied visual arts at Marc Bloch University in Strasbourg (F), at the University of Arts in Berlin (D), under the direction of professor Christiane Mőbus, and at Central St. Martins College of Art & Design in London (GB), where she obtained a Master's degree in Fine Arts in 2002. Since 2000 she has regularly participated to exhibitions, particularly in Europe. She has been awarded with several artists' residence grants in Europe. Moreover she is a founding member of the 'Pandora Company'. In 2007 she initiated the heteroclite project 'The Game of Life' presented in Belgium, Germany and Luxembourg. The same year, she was selected for the Prix d'Art Robert Schuman. Since 2008, Martine Feipel has been based in Luxembourg where she still works in collaboration with Jean Bechameil. In 2009 they participated to the Kunst & Zwalm Biennale (B) with a collaborative artwork, and in 2010 they had several single exhibitions. In 2011 Martine Feipel & Jean Bechameil were selected to represent the Grand-Duchy of Luxembourg at the 54th Venice Biennale of Contemporary Art. In 2012 they participated at the Beaufort Triennale of Contemporary Art, curated by Philip Van den Bossche, and presented ' A Thousand Years' at Arts Gallery of London.

Jean Bechameil, born in 1964 in Paris (F), has worked since 1990 as an independent sculptor. He lived in Copenhagen for about twelve years in which he regularly participated to exhibitions. At the same time, he worked on numerous sets for plays and films. He first began working in Paris where he helped produce the decor for Madame Bovary by Claude Chabrol (1991). He then took part in set designs all over Europe. Among other things, he helped realising the decor for Antichrist (2009), Manderlay (2002), Dogville (2000) and Dancer in the Dark (1998) by Lars von Trier. Since 2008, Jean Bechameil has been based in Luxembourg where he still works in collaboration with Martine Feipel. In 2009 they participated to the Kunst & Zwalm Biennale (B) with a collaborative artwork, and in 2010 they had several single exhibitions. In 2011 Martine Feipel & Jean Bechameil were selected to represent the Grand-Duchy of Luxembourg at the 54th Venice Biennale of Contemporary Art. In 2012 they participated at the Beaufort Triennale of Contemporary Art, curated by Philip Van den Bossche, and presented ' A Thousand Years' at Arts Gallery of London.