Nairobi - A State of Mind: The project in the KUB Arena constructs a picture of Nairobi with reference to the ensemble of relations, temporalities, and spaces that constitute the city's present and its history. Florian Pumhosl's wide-ranging oeuvre, which includes films, installations, objects, and glass painting, is characterized by great reduction in terms of artistic expression while nevertheless, despite this frugality, creating a strongly abiding presence. 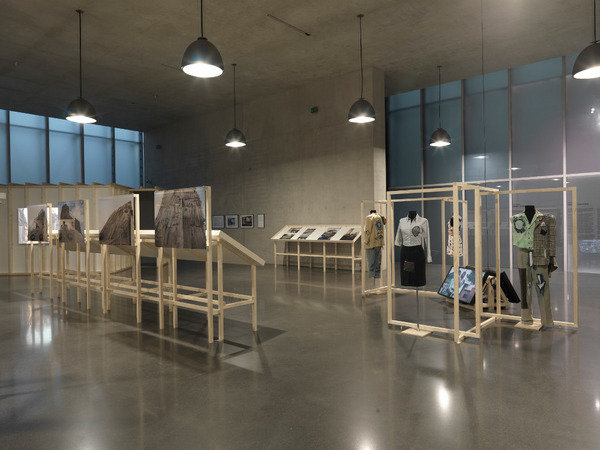 Florian Pumhösl (born 1971, lives in Vienna) is a rarity in his generation of Austrian artists in having rigorously and cogently developed an independent abstract formal and pictorial language. For all its rigor of expression this language wields a highly impressive range of contemporary references and has immense visual potential. His international career began at a young age—at the time of his participation in the legendary group exhibition Backstage at the Hamburg Kunstverein together with Dorit Margreiter and Mathias Poledna in 1993, Florian Pumhösl was just twenty-two years old. With the symbolic support of friends, the artist trio’s contribution to that show provided for the removal of all the institution’s door locks during the show, thus opening the exhibition hall’s accessibility, both really and metaphorically. If today, almost twenty years later, such clearly articulated reflection on the mechanisms of the art system and its institutions seems to be more covert in his works, yet engagement with the specific exhibition site and its institutional features is of great significance for him, now as then. In this respect, his big solo exhibition at the Museum Moderner Kunst Stiftung Ludwig Vienna in early 2011 was an eminent example. Here, by means of a architectural route, Pumhösl set up an exemplary dialog between the brilliantly bright exhibition space, the so-called white space, and the black box used for film screenings. In addition to numerous solo shows in public museums and art halls including in Cologne, Geneva, and Amsterdam, in the past ten years he has participated in many major art events, such as the São Paulo Biennale, the Venice Biennale, and documenta 12 in 2007.

Florian Pumhösl’s wide-ranging oeuvre, which includes films, installations, objects, and glass painting, is characterized by great reduction in terms of artistic expression while nevertheless, despite this frugality, creating a strongly abiding presence. In recent years, he has frequently produced series, such as his Bewegliche Bühne [Moving Stage], consisting of glass plates cut into various shapes, which he presents as a kind of staging in different configurations on sets of four supporting plates.

Another cycle of pictures titled Diminution consists of thin, glass plates painted with black lines in nine two-to-six piece elements. Among other things, Pumhösl alludes to Hans Richter’s Dada Heads in these works.
His central engagement with the historical formal vocabulary of modernism and its specific thematic issues is typical of Florian Pumhösl’s work. What interests him frequently is not only the genealogical derivation of a particular form, but also its social and political setting. His projects are often preceded by lengthy and involved research that can take him to countries such as Japan, Tanzania, or, as recently, to the Finnish-Russian region of Karelia.

Florian Pumhösl will be presenting a new series at the Kunsthaus Bregenz titled Räumliche Sequenz [Spatial Sequence] specially produced for the occasion. The work consists of plaster panels in three different sizes grouped in threes, the order of each trio beginning with the smallest and ending with the largest format. The progression of the 45-piece series of 15 subjects, subtitled Cliché, takes its lead from the Bauhaus artist László Moholy-Nagy’s enamel pictures. In contrast to Moholy-Nagy, who delegated the task in the case of his telephone pictures to a specialist firm, Pumhösl himself applies the formal effects to his panels using what he refers to as a cliché stamp.

The printing procedure involved goes back to the start of the nineteenth century when stamp-like printing dies were developed. A special feature of these dies, known in French as »cliché«, in English stereotype, was that they could be indefinitely reused. Concerning his new series for the Bregenz exhibition, Pumhösl has written: »For these works I had panels made of plaster, a homogenous mineral material, on which I applied paint using a cliché stamp. The transparent cliché makes it possible to design the picture support on the visible side. An idea I find important is that an abstract picture is, from the outset, a reproduction (possibly of something ideal) and that its peculiar qualities allow this to be grasped.«

The formal patterns of indigo blue that rhythmicize the plaster panels are no less important than how they are applied. Against the backdrop of Pumhösl’s interest in early Latin-American woven patterns and their reception by modernist artists, for instance, a discursive field opens up combining extra-European influences, the importance of design, and seriality in art. Seriality comes across especially clearly through the repetition of line patterns within a trio and the potential for reproducing the same by means of the cliché stamp.

Moreover, the line groupings on the individual panels, with their potential for musical interpretation, point to a central aspect of historical abstraction. And the positioning of the panels in space, the distances and open areas Pumhösl has set between them, also recall a time-based sequence and in this sense resemble a musical score.

Nairobi, the capital of Kenya, whose origin goes back to the 1899 colonial project of extending the railroad from the coast to Lake Victoria is one of East Africa’s most important economic hubs and seat of numerous international organizations. In recent decades it has also become the center of a dynamic art and cultural scene. Hand in hand with the local effects of globalization, the liberalization of the national communication media, the advent of the internet in the 1990s, and the end of Daniel arap Moi’s repressive regime in 2002, fundamental changes have also occurred in the field of art. Despite the ongoing paucity of state support, numerous independently organized initiatives and transnational collaborations have arisen, whose actors share a growing interest in challenging and critically questioning national narratives and sociopolitical developments. Against the backdrop of East Africa’s colonial past and power structures, some of which still exist today, the presented works in the KUB Arena develop their own views of their surroundings, their history and of the constant changes that make up contemporary Nairobi.

In his series Nairobi—A Utopia in the Eye of the Beholder (2007–2012), Jacob Barua works with the city’s architectural landscape, analyzing by means of photographic documentation the history inscribed in individual buildings. All in all, in its conglomeration of widely differing, often imported styles and techniques, the series draws attention to Nairobi as a projection screen—a tabula rasa of implemented fantasies, utopias, and life visions. Laura Horelli, by way of contrast, in her video work The Terrace (2011), returns to a residential complex where a number of her childhood years were spent. By means of photographs and video takes within a circumscribed area, she activates her memory of everyday family life, providing glimpses into the social structures of Kenyan society in the late 1970s and early 1980s. James Muriuki likewise employs the medium of photography, although in his case his gaze is turned on contemporary processes of change and movements in public space—buildings in process of construction that mark the current texture of the city as symbols of power, progress, and technology. Observations of their urban surroundings are the starting point for Peterson Kamwathi Waweru’s large-format charcoal drawings as well as the works of Sam Hopkins, Kevo Stero, and the artist group Maasai Mbili.

What they all share is reference to a society in which ideas and modes of life are imported and appropriated under the influence of historical and current social movements—the British colonial period and the later dominance of the development aid sector, Asiatic »migrant workers,« waves of refugees, and economically dictated rural depopulation. Rather than just trace this wealth of concepts and lines of influence, the artists are interested in extrapolating them into the present, encountering the city as a potential sphere of action, and dissecting out hidden structures in order to project their own pictures of a city–pictures that open up narratives that go way beyond postcard clichés, exoticizing external views, and national concepts of identity.

Naeem Biviji and Bethan Rayner of the Nairobi-based architecture and design office Studio Propolis developed an architecture for the occasion of the KUB Arena exhibition that gives spatial expression to the content of the project.

The exhibition concept was developed following two research trips to Nairobi undertaken by Eva Birkenstock and in close dialog with the
participating artists as well as Johannes Hossfeld, Director of the Goethe-Institut Nairobi, Kenya