I dream of the code of the west. The winner of the Zurich Art Prize 2011 is interested in the cultural and art-historical avant-garde movements of the 20th century, particularly when they stand for emancipation and belief in progress. For the exhibition she is realizing new works, the content of which is linked to the American comic series "Krazy Kat". 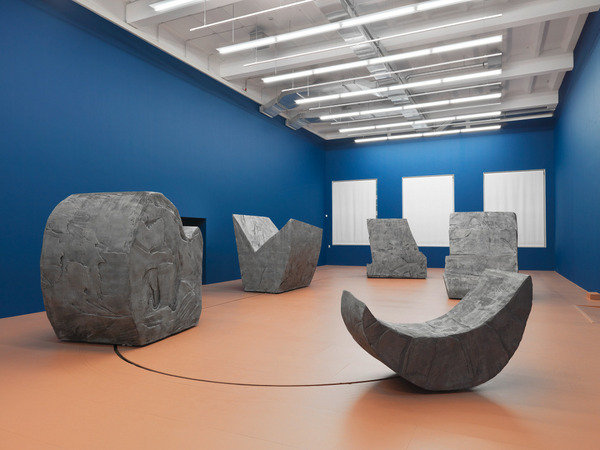 Once a year, in cooperation with the Zurich Group, the museum Haus Konstruktiv awards the "Zurich Art Prize" to an outstanding young artist who reflects the fundamental themes of constructivist-concrete and conceptual art in a contemporary manner. The prize money of 80,000 CHF is linked to a solo exhibition at Haus Konstruktiv.

The artist Mai-Thu Perret (born 1976 in Geneva, lives in Geneva) is an excellent addition to the ranks of the previous winners: she is interested in the cultural and art-historical avant-garde movements of the 20th century, particularly when they stand for emancipation and belief in progress.

For her solo exhibition at Haus Konstruktiv, Mai-Thu Perret, who is currently attracting considerable attention in the Swiss and international art scenes, is realizing new works, the content of which is linked to the American comic series "Krazy Kat".

This comic strip was published regularly in American newspapers from 1913 until the death of the author George Herriman in 1944. The narrative revolves around the naive and seemingly genderless cat Krazy, the cynical mouse Ignatz and a police dog, who is in love with Krazy. "Krazy Kat" is primarily about repetition, about endless variations within a repeating story, which takes place in an imaginary Coconino County. In this surreal universe, things, gender roles, animal and human, actions and feelings, keep getting mixed up, giving rise to a subversive interplay between sense, nonsense and poetry.

In the exhibition hall on the first floor, Perret is presenting a large installation, the title of which is also the name of the exhibition: rock-like objects, which slowly move through the room on a track. Perret took the title from a poem by the American poet Ted Berrigan: I dream of the code of the west – and yes, Mai-Thu Perret’s works are indeed often about various codes, different perspectives on a story and various access options. In the comic strip "Krazy Kat", lifeless props, such as rocks for example, become living creatures, while living characters become a rigid backdrop.

It is precisely this aspect which Perret picks up on in her room-filling installation, in which she converts the hall into a highly schematized rocky landscape: the visitors encounter five large rock-like objects, elliptically distributed throughout the room, which is painted blue and brown. Only when the observer has lingered for a longer period of time, does a moment of irritation arise: because the objects, made of polyurethane foam, do not stand still. Instead, they move forward very slowly and are thus reminiscent of the rocks which are brought to life in "Krazy Kat". Conversely, the visitor briefly interrupts their walk around the installation and thus becomes a stationary extra.

Mai-Thu Perret's works admirably reveal how the content-related accomplishments of the avant-garde and of constructivist-conceptual mindsets are being thought through further and thus carried into the present by a younger generation of artists.

Acknowledgements
The main sponsor of this solo exhibition is the Zurich Group. We would also like to thank Galerie Francesca Pia, Zurich, the Timothy Taylor Gallery, London, and the Swiss Arts Council Pro Helvetia.

Image: I dream of the code of the west, 2011. Kinetic installation. Photo Stefan Altenburger