Restless Spaces/Fragile Traces. Through a new series of work, the artist focuses on the elements, including occurrences such as the Aurora Borealis, volcanoes, land rifts, mountains, geysers, the effect of the changing light on the land. 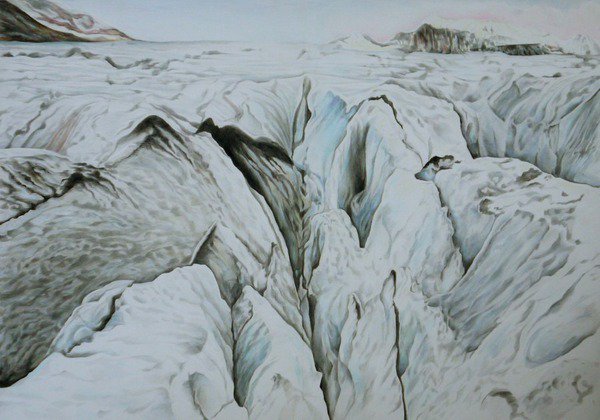 Talbot Gallery Studios are delighted to announce a Solo exhibition, Restless Spaces | Fragile Traces, by Michelle Considine.
Capturing the landscape in all its complexity is key to Considine’s work and, focusing on this topic, she looks at the unique and diverse forms found in nature and how extraordinary natural occurrences affect the land and skies around us. A fascination with the power of the natural environment, the continual movement and metamorphosis of the earth, and the consequences of these, are a reoccurring theme throughout her work.

Through a new series of work, Considine focuses on the elements, including occurrences such as the Aurora Borealis, volcanoes, land rifts, mountains, geysers or, simply, the effect of the changing light on the land.  Working in different formats, she strives to create a strong visual dynamic to emphasize the mass of the subject matter.  An element of the surreal is also touched upon in her work, expressing almost otherworldly or romanticised versions of the land and skies. The resulting imagery is both a document and study of the continually active, complex and fragile world around us.