'Fore' is the 4th installment of the 'F' series and it features 29 emerging artists of African descent living and working in the US. 'Gordon Parks' includes 20 photographs of the Fontenelle family, whose lives Parks documented as part of a Life magazine photo essay. 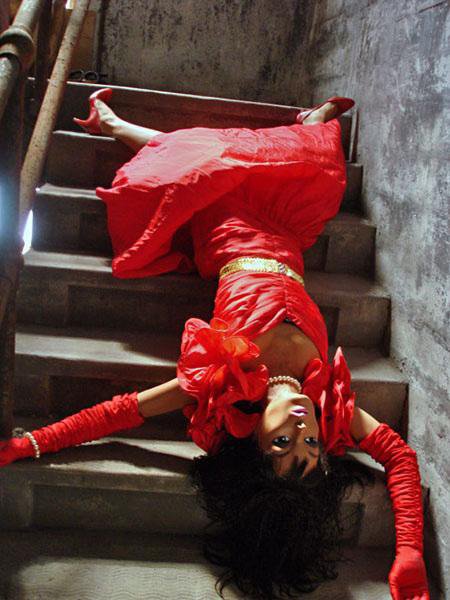 Fore is the highly anticipated fourth installment of the Studio Museum’s “F” series, which includes Freestyle (2001), Frequency (2005–06) and Flow (2008). Director and Chief Curator Thelma Golden conceived of Freestyle in 2000, recognizing a need to both invest in the presentation of emerging artists of African descent and identify the diverse themes and ideas these artists were working with at the beginning of new century. Freestyle and its successors launched an international debate about the terms of black art, as well as the careers of many artists.

Like its popular and critically acclaimed predecessors, Fore is a non-thematic group presentation reflecting a multitude of ideas, approaches and processes. Featuring twenty-nine emerging artists of African descent living and working in the United States, the exhibition brings a new generation into the forefront of visual and critical dialogue.

The artists in Fore embrace a wide range of media and draw from a number of art-historical strategies, including realist painting, site-responsive projects and incorporation of found objects and materials. Reflecting the artistic, cultural and social changes that have occurred locally and nationally over the past five years, many work in performative, socially- engaged and time-based media; others bring twenty-first- century perspectives to traditional media, including painting, sculpture and drawing.

“The ‘F’ series is so important to the Studio Museum because it continues our founding mandate to present new, innovative, and experimental work and to respond directly and immediately to the creative climate of the artistic community,” says Golden. “Fore will offer a wide, encompassing and honest view of an incredibly exciting group of young artists.” Organized by Assistant Curators Lauren Haynes and Naima J. Keith and Exhibition Coordinator and Program Associate Thomas J. Lax, Fore reflects the collaborative vision and individual voices of three emerging curators, and continues the Studio Museum’s commitment to reimagining and redefining exhibitions of contemporary art. Fore will occupy and activate multiple spaces in the Museum, embracing performances, screenings, lectures and conversations as integral parts of the exhibition. In conjunction with Fore, the Studio Museum will publish a catalogue including full-color reproductions, essays by Haynes, Keith and Lax and a biography and commissioned essay by an emerging critic, curator or art historian for each artist.

Leadership Support for Fore provided by The Andrew W. Mellon Foundation
Major Support provided by Jacques and Natasha Gelman Trust and The Andy Warhol Foundation for the Visual Arts. Additional support is provided by the Ed Bradley Family Foundation

Gordon Parks: A Harlem Family 1967 honors the legacy and the work of late iconic artist and photojournalist Gordon Parks, who would have turned 100 on November 30, 2012. The exhibition, organized by Thelma Golden and Lauren Haynes, will feature approximately thirty black and white photographs of the Fontenelle family, whose lives Parks documented as part of a 1968 Life magazine photo essay. A searing portrait of poverty in the United States, the Fontenelle photographs provide a view of Harlem through the narrative of a specific family at a particular moment in time. This intimate exhibition will include all images from the original essay as well as several unpublished images—some which have never been displayed publicly.

Gordon Parks: A Harlem Family 1967 follows The Bearden Project, a celebrated exhibition the Museum initiated to pay tribute to Romare Bearden and his ongoing presence in the Studio Museum’s institutional life, as well as his continuing influence on the generations of artists that came after him. In similar fashion, A Harlem Family 1967 acknowledges the influence of Gordon Parks, a colleague and peer of Bearden who similarly blazed a path for today’s artists and journalists. Both men worked across not only the cultural but political and social conversations of the day, but also built legacies that continue to support the Museum’s core beliefs and founding principles.

The Studio Museum in Harlem and The Gordon Parks Foundation are together creating an exhibition catalogue for Gordon Parks: A Harlem Family 1967 complementing the three volume set German publisher Steidl is planning to publish in honor of Parks’s centenary.

Gordon Parks: A Harlem Family 1967 is supported by The Robert Mapplethorpe Foundation Support for the exhibition catalogue provided by The Andrew W. Mellon Foundation

The Studio Museum in Harlem
144 West 125th Street - New York, New York 10027
Hours and Admission
The Studio Museum is open Thursday and Friday, noon-9pm; Saturday, 10am-6pm; Sunday, noon-6pm. The Museum is closed to the public but available for school and group tours on Monday, Tuesday, and Wednesday.
Museum admission is by suggested donation: $7 for adults, $3 for students (with valid identification) and seniors. Free for children 12 and under. Sundays are free at the Studio Museum, thanks to generous support from Target. For more information visit studiomuseum.org. The Studio Museum in Harlem’s exhibitions are supported with public funds from the following government agencies and elected representatives: The New York City Department of Cultural Affairs; New York State Council on the Arts, a state agency. and Council Member Inez E. Dickens, 9th Council District, Speaker Christine Quinn and the New York City Council.