A follow-up exhibition of work by the acclaimed German photogram artist, featuring both old and new work. Included are works from the celebrated Aegineten photo series, which depict life-size ancient Greek statues from the Glyptothek Museum in Munich, along with newly released nudes. 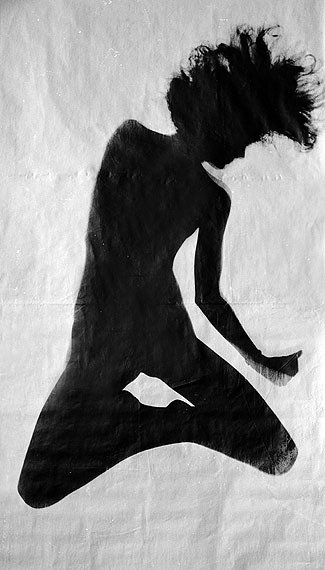 Following the hugely successful exhibition “Shadow Catchers” at the Victoria and Albert Museum in Autumn 2010, the ATLAS Gallery is pleased to announce a follow-up exhibition of work by the acclaimed German photogram artist, featuring both old and new work. Included are works from the celebrated Aegineten photogram series, which depict life-size ancient Greek statues from the Glyptothek Museum in Munich, along with newly released photogramic nudes and the hugely influential Tellerbilder or “Plate” series from the 1970’s, which, in more recent years inspired younger photogram artists such as Adam Fuss and Gary Fabian Miller. One highlight will be a new work depicting a dinner table laden with the detritus of a long and messy meal, photographically printed onto linen.

A true pioneer of photographic art, inspired by the Constructivist camera-less photography of Làszló Moholy-Nagy and by Man Ray’s Surrealist photograms or “Rayographs”, Floris Neusüss has dedicated his whole career to the practice, study and teaching of the photogram, exploring its technical and visual possibilities and pushing the boundaries of the medium. Photograms are created by the placement of objects or in Floris’s case, human bodies, on light-sensitive paper or film, and once exposed to light, the shape of the object is revealed. The proximity of the object to the paper creates sharper or softer outlines and the intensity of the tones is dependent on the transparency of the objects and the amount of light used. The process is akin to “painting” with light, resulting in a ghostly silhouetted negative image.

Neusüss further departs from the conventional photogram by occasionally wiping a brush, sponge, or rag dipped into developer or fixer solution across the surface of the paper to produce controlled, painterly gestures. Sometimes he does not fix his prints, allowing the works to constantly change over the years and the photographic process to continue beyond the darkroom. Amongst Neusüss’s best known works are his “Körperfotogramms” (also known as “Nudogramms”), lifesize silhouettes of nude bodies exposed on photographic paper in a variety of expressive poses. Often suggesting rapid motion, the figures are caught in space and in an ethereal dream-like state. Neusüss comments: “In the photogram...man is not depicted, but the picture of him comes into being by an act of imagination”. He worked on this series throughout the 1960s and early 1970s, initially using standard silver bromide paper to show white figures on a black background and later using auto-reversal paper to make black figures on white backgrounds.

Born in 1937, Neusüss studied printmaking before turning to photography. He was an influential teacher in Germany and recently retired as Professor in Experimental Photography at the University of Kassel, a post he had held since 1971.

Philippe Garner, International Head of Photography at Christie’s, comments: “Neusüss occupies a unique position in the history of the photogram. He demonstrated a particularly lyrical vision in using the technique to create life-sized, fluid and spectral impressions of the human figure. His images, made in the period 1960-1974, have mystery and depth, making him a worthy successor to Man Ray and Moholy-Nagy.”

Opening of the exhibition on Wednesday 7th November 7p.m.