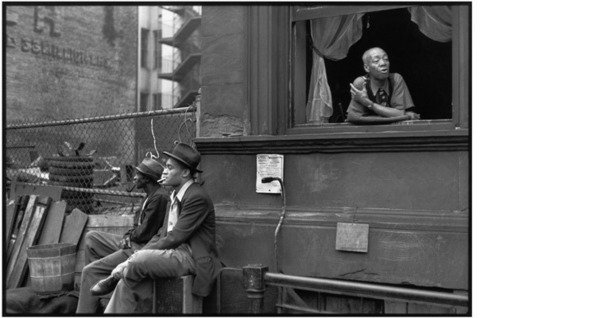 Curated by William A. Ewing

During his life, Cartier-Bresson was notoriously opposed to colour photography, which in the 1950s was still in its infancy as a medium, limited by both technical and aesthetic models of the time. The generation after Cartier-Bresson however, challenged this appraoch. As curator Ewing notes, in the eyes of younger photographers, with the advent of new technologies, "black and white photography had had its day. The world was in colour and they finally had the appropriate tools" to realise this vision.

Cartier-Bresson: A Question of Colour seeks to position the work of the 15 contributing artists alongside that of the master, considering how his ethos of the 'decisive moment' played out in their own polychrome works.

Please note that the exhibition is closing at 17.00 on Thursday 15 November

Tim Walker is one of the most visually exciting and influential fashion photographers working today. Extravagant in scale and ambition and instantly recognisable for their eye-opening originality, Walker’s photographs dazzle with life, colour and humour. His recent work is drawn from the pages of the world’s leading magazines: British, French, American and Italian Vogue, Vanity Fair, W and The New Yorker among many others.


Walker’s photographs provide the focus of the exhibition, but the camera, he claims, ‘is simply a box put between you and what you want to capture’. Everything in Walker’s pictures is specially constructed and in a glimpse behind the mechanics, there are installations and a selection of the extraordinary props and models on show: giant grotesque dolls for Italian Vogue and an almost life-size replica of a doomed Spitfire fighter plane.

The photo shoot begins to resemble the film set: hair and make-up artists, fashion stylists and costume fitters, model makers, set designers, builders, producers and painters, prop suppliers and a cast of models playing out imagined roles. At the centre is Walker harnessing creative and technical talents to conjure up the harmonious whole in a singular picture.

The exhibition is accompanied by a series of events that feature many of Tim Walker’s long-time collaborators and uncover the influences and stories behind his work. There will be workshops for all ages offering visitors the opportunity to work with some of the set designers and prop builders who have worked with Tim Walker throughout his career and talks will include Tim Walker in Conversation with Penny Martin. Throughout the exhibition there will also be the opportunity to see a series of films specially curated by Tim Walker. Made up of films that have inspired and influenced many of his images, they will include cult movies such as La Belle at la Bete, The Red Shoes, A Matter of Life and Death and Tim’s own first feature The Lost Explorer.

To coincide with the exhibition, Thames & Hudson will publish Story Teller by Tim Walker featuring over 175 inspirational images, collages and snapshots from Walker’s personal archives.

Tim Walker: Story Teller Spotlight Tours
Thursdays during exhibition, 13.15 - 13.45
Join a member of the Learning Team for a spotlight tour around Tim Walker's magical Story Teller exhibtion offering an insight into the ideas and inspirations behind his fashion photographs and large scale props (some of which are featured in the exhibition).
Limited spaces on the tours are bookable at the entrance to the exhibition in the East Wing Galleries at 12:45 on the day.

Exhibitions on Film: The Wizard of Oz
Saturday, 8 December, 14.00-15.45
The Screening Room £8/£7 concessions
‘Toto, I don’t think we’re in Kansas any more…’ These words take Judy Garland’s Dorothy out of her drab black-and-white farmstead and into the Technicolor land of Oz. A personal favourite of Tim Walker, from the hordes of flying monkeys to the glittering Emerald City, few films remain so iconic and unforgettable.
BOOK TICKETS NOW

Exhibitions on Film: Double Bill: The African Queen & The Lost Explorer
Thursday, 13 December, 18.30-20.40
Deadhouse £12/£11.00 concessions
Screened in the atmospheric Deadhouse beneath Somerset House’s courtyard, these films (one selected by Tim Walker; the other by him) take viewers on an intrepid trip into the unknown. In The African Queen, Humphrey Bogart and Katharine Hepburn battle German gunboats in East Africa, while in The Lost Explorer a little girl ventures to the bottom of her garden and is told stories of ghost ships filled with canaries.
BOOK TICKETS NOW