Djordjadze creates in a site-specific way. Although many of the objects are made in her studio, her works acquire their final form within their exhibition space. Auerbach's exhibition consists of 25 handknitted sweaters worn by all of Malmo Konsthall's staff. 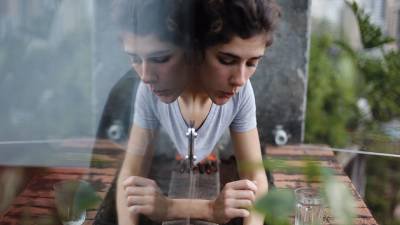 Thea Djordjadze creates in a site-specific way. Although many of the objects are made in her studio, her works acquire their final form within their exhibition space; giving a work its final configuration and adapting it to the specific space are a crucial part of her approach. She often works to the very last moment, thereby keeping the relationship between the object and the space open as long as possible. The result is a kind of mutual transformation in which the art adapts to the space and the space to the art—an organism composed of objects and the impressions those objects leave after themselves. A movement which leads on to the next one.

Djordjadze creates sculptures, organisms and indeterminable landscapes—traces and craters of modernism, impressions of something out of keeping with the times. Her sculptures reflect both antique landscapes from nomad cultures and the cornerstones of twentieth-century avant-garde architecture and art. For her sculptures and installations, she uses clay and plaster, which she models and sometimes paints. She combines the results with materials such as canvas, metal, foam rubber, textiles, rugs, pigments, papier-mâché and wood. In her sculptures and installations these soft, hand-made objects are constantly encountering sharp edges of metal and wood. The installation also includes paintings, recently rediscovered, which she created nineteen years ago.

The exhibition will continue to Kunstverein Lingen Kunsthalle, Germany and Mudam Luxembourg. There, the exhibitions will resemble each other and consist of the same works with some added and others removed. Despite this, each exhibition will be unique and different, and will reflect Djordjadze's work methods and the way she occupies a space. She will, of course, work in a site-specific way at each exhibition venue, and will adapt her works to the existing architecture to give them a new form and aura.

Some would say that one's persona or identity is mirrored in the clothes they wear. We show part of ourselves, who we are and how we live through what we wear. Having said that, it should also be stated that we seldom display direct social or political opinions, questions and/or commentary on our clothes.

However, the Los Angeles-based artist Lisa Anne Auerbach proudly does the opposite. Auerbach knits sweaters with slogans, words, graphical symbols that comment on her views in a straightforward, satirical and political way. Sentences like, 'Where there's drink there's always damage,' 'Would you buy a used car from this man?,' 'Is there more freedom here?' or 'I used to be part of the solution,' and on the backside, '… now I'm part of the problem' are a few of Auerbach's statements knitted into the sweaters.

Lisa Anne Auerbach's solo exhibition at Malmö Konsthall will not appear as an ordinary exhibition. The exhibition consists of 25 handknitted sweaters worn by all of Malmö Konsthall's staff. The designs are all made by Auerbach, but this time she has included and mixed her own words and statements with chosen statements from staff and knitters. As the staff is wearing the sweaters, the audience will have to be patient to get to see them all and possibly get closer to the staff than usual—simply to look at and read the works. In this way the level of intimacy between audience and staff will change. Auerbach has collaborated with eight knitters from Denmark during the process.

Auerbach has chosen the knitting technique called Hønsestrik, a style invented and named in Denmark by Kirsten Hofstätter in the early 1970s aiming to break the tradition and norms of knitting, and furthermore to move away from machine-produced sweaters and make knitting more accessible to people. It was an anti-authoritarian style abundant with colors and patterns, and at the same time a feminist comment on the (male-dominated) political magazine Hanegal. Hofstätter has published three books about Hønsestrik.

The yarn is sponsored by Filcolana.