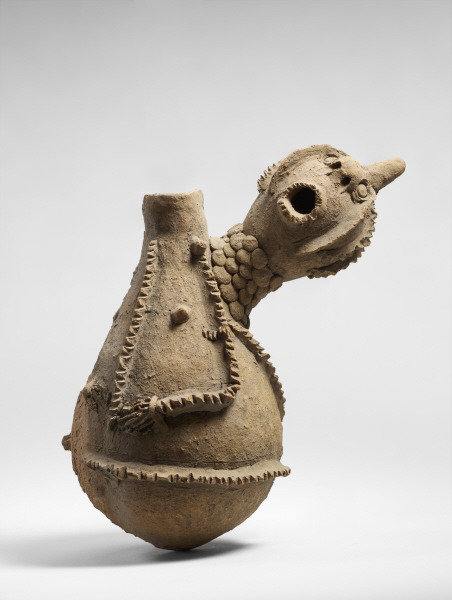 The 650-mile-long Benue River - the largest tributary of the great Niger - flows across the geographic center of Nigeria. Unfolding as a spectacular journey up the Benue, NIGERIA introduces major artistic genres and styles associated with more than twenty-five ethnic groups living along the river’s Lower, Middle, and Upper reaches. These diverse and remarkable artworks include sculptural forms in wood, ceramic, and metal. Among them are full-bodied maternal images; sleek columnar statues; helmet masks with naturalistic human faces; horizontal masks that appear as stylized animal-human fusions; imaginatively anthropomorphized ceramic vessels; and elaborate regalia forged in iron and cast in copper alloys. All of these varied objects had meanings and purposes crucial to Benue Valley peoples as they confronted and resolved life’s challenges. Within this broad regional view the exhibition pauses to highlight distinctive community traditions and the ways that artists have freely innovated within the parameters of local styles.

Through their often surprising resemblances, the artworks associated with neighboring peoples can also bear witness to historical communication and interaction across communities. Artistic genres throughout the region were rarely confined to particular peoples, places, or even contexts of use and their “life histories” were seldom simple. Artworks could be made by one group and used by another where meanings might change; stylistic traits could be shared across cultures; and the places where objects were collected may not have been where they were created.

This exhibition unmasks the fluid and dynamic nature of art and the local spheres of interaction, adaptation, and transformation in which objects have moved. Over the centuries, the Benue River Valley witnessed a confluence of peoples, institutions, and ideas that is only now beginning to be understood as having resulted in one of the major artistic legacies of sub- Saharan Africa.

6 major pieces are used to introduce the central concept of the exhibition and illustrate the major genres that define the 3 subregions of the Benue River Valley.

The area around the confluence of the Niger and Benue Rivers has been the home to a changing constellation of peoples over many centuries. Today it is where the Igala, Ebira, Idoma, Afo, and Tiv peoples live, among others. The lower stretches of the Benue, a mile wide during the rainy season, have long been both a pathway and barrier: a path of escape, trade, or migration, but a barrier against advancing armies and other intruders. The incursions of the Fulani dislodged peoples from the north side of the Benue, who fled to the south, often with their important ritual objects. They gradually regrouped into new communities and exchanged ideas and forms with their new neighbors. Among these were the Tiv peoples, who expanded from the south and created a cultural wedge between other peoples who had shared histories.

These destabilizing events help explain the fluid identities of artistic traditions that span the Lower Benue and its open frontier with the Middle Benue. Maternal sculptures, often carved with one or more children, were used to safeguard women’s health and fertility. They also protected the earth, which was thought of as female, and the well-being of crops. Their usage throughout this region speaks to their power and efficacy and makes it difficult to assign specific ethnic affiliations to works lacking documentation. Certain distinctive Lower Benue masquerades were also highly mobile, perhaps none more so than the powerful ancestral incarnations in which performers were fully enveloped in burial shrouds and prestige textiles. Specific objects offer the opportunity to tell fascinating stories of meaning, history, and interaction, exposing the forces that have shaped artistic identities over time and space.

The largest and most ethnically and geographically complex of the Benue subregions is the Middle Benue. During the first half of the nineteenth century, the establishment of Muslim Fulani states and the simultaneous intensification of slave raiding dramatically impacted the diverse peoples living there. These events were followed by further disruptive outside influences in the form of British colonization and the arrival of Christian missionaries starting in the early twentieth century.

Most contemporary ethnic identities within this area crystallized only during the colonial period, because the British needed them for administrative purposes, and local people embraced them out of a sense of belonging. The works of more than ten of these culture groups - with an emphasis on the Jukun, Mumuye, Chamba, Wurkun/Bikwin, Goemai, Montol, and Kantana/Kulere - are featured here.

Distinctive to the arts of the Middle Benue region are sculptures in human form, hybridized human-animal horizontal masks, and remarkable vertical masks that may have functioned as “walking sculptures.”

The striking resemblances among these art objects speak to historical relationships and ritual alliances among neighboring peoples. All across the region, wooden figures served as intermediaries in rituals aimed at healing and protecting the community, especially from such crises as epidemics, drought, and warfare. And, horizontal and vertical masks were used in performances associated with funerals and remembering the dead, initiating youth, ensuring or celebrating a successful harvest, or healing the sick.

Due to its relative isolation, the Upper Benue is distinct from other areas of the river valley. Its rugged, hilly terrain provided shelter from the incursions of invading groups, especially mounted Fulani warriors. The remoteness of the region also meant that local ritual practices were able to persist well into the late twentieth century when they were documented in the field. The arts of eight of the diverse peoples living in this subregion are represented here with a focus on the Cham-Mwana, Longuda, Jen, Ga’anda, ‘Bəna, and Yungur.

The predominance of sculptural ceramic vessels at the center of Upper Benue religious practices represents a marked departure from the wood figures and masks typical of the other two subregions. The highly decorated and anthropomorphized vessels, made primarily by women artists, instead exploit the expressive capacities of clay. Like wood sculpture, ceramic vessels served various ritual functions, including healing the sick, safeguarding hunters and warriors, and activating the presence of various ancestral and protective spirits.

Here, as elsewhere, there are striking convergences in the styles and functions of ceramic sculpture mapped among neighboring peoples, revealing the extent of their historical communication and exchange. In a stunning deviation from the norm, monumental male figures carved in wood may be the only vestiges of an abandoned memorial tradition that persisted primarily in clay.

The exhibition and accompanying catalogue are dedicated to the memory of Arnold Rubin, Associate Professor of Art History at the University of California, Los Angeles, who laid the foundations for this project in the 1980s, identifying the major collections and objects. The curators and authors of this project are extremely grateful to him for his original research and interpretations.

Marla C. Berns has been Director of the Fowler Museum, University of California, Los Angeles, since 2001, after serving as Director for 10 years at the University Art Museum, University of California, Santa Barbara. She holds a Ph.D. in art history, specializing in African Art, which she received from UCLA, and her research and writings have concentrated on the arts of north-eastern Nigeria, where she carried out fieldwork in the early 80s on sacred sculpture and other women’s arts, including the decoration of gourds and scarification.

Richard Fardon is an anthropologist and Africanist, who earned his Ph.D. in anthropology from University College London. Having conducted fieldwork in Nigeria and Cameroon, he has published widely on the Chamba and their neighbouring populations. Since 1988, Fardon has been teaching West African Anthropology at SOAS, University of London, where he is Head of the Doctoral School.

Hélène Joubert is a graduate of the École du Louvre, Université Paris I, the Institut National des Langues et Civilisations Orientales and the École Nationale du Patrimoine. She was Curator in charge of the Africa section at the Musée national des Arts d’Afrique et d’Océanie (Paris) before becoming Head of the Africa Collection at the musée du quai Branly in 2005. Joubert has been teaching History of African Art at the École du Louvre since 2002.

Sidney Littlefield Kasfir is Professor Emerita of African art at Emory University in Atlanta, Georgia. She obtained her doctoral degree at SOAS, University of London, and wrote her thesis on the "Visual Arts of the Idoma of Central Nigeria". Primarily known for her work with the Idoma, Kasfir has made many contributions to the field of African art. For the last 30 years, she has been working with the Samburu in northern Kenya, where she now spends six months a year. She was Curator of African Art at the Michael C. Carlos Museum in Atlanta from 1998 to 2006.

The exhibition has been produced by the Fowler Museum at the University of California, Los Angeles, in partnership with the musée du quai Branly. It was shown in the United States under the original title, Central Nigeria Unmasked: Arts of the Benue River Valley.

The exhibition is funded with major support from the National Endowment for the Arts, the Shirley and Ralph Shapiro Director's Discretionary Fund, Jay and Deborah Last, Ceil and Michael Pulitzer, Joseph and Barbara Goldenberg, the Robert T. Wall Family and Jill and Barry Kitnick.