Missing Documents. Photographs of the Polish Transformation After 1989. The first exhibition organized as part of the program, presents images by the most renowned photographers that show a country subsumed in an economic, social, and cultural crisis, seeking its identity between real-socialism and turbo-capitalism. 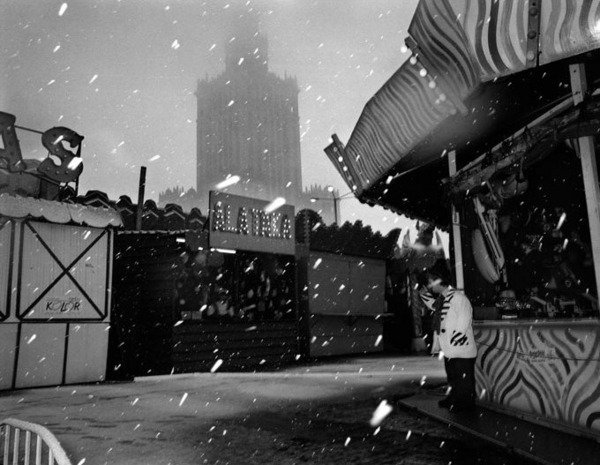 Documentalism certainly remains one of the most inspiring and current attitudes among artists with respect to reality. Even if the age of virtual reality has been repeatedly announced over the last 20 years, interest in the political, social, and economic dimensions of life has been developing most dynamically in contemporary art, not only among its socially engaged stream. Meanwhile, investigations of contemporary art and visual culture clearly want for deeper analysis of the documentary, which, on the other hand, is well reconnoitered by Polish historians. The CCA Ujazdowski Castle's three-year POSTDOCUMENT program – one that acclaimed photographer and theoretician Martha Rosler would have wanted – seeks to bring together exposure of the most interesting documentary phenomena in photography, film, nonfiction literature while also expanding its theoretical context. Missing Documents. Photographs of the Polish Transformation after 1989 is the first exhibition organized as part of the POSTDOCUMENT program.

Missing Documents is an exhibition of photography from the period of systemic transformation, one seen through the eyes of domestic and foreign photographers as incomplete and full of tension. CCA Ujazdowski Castle presents images by the most renowned photographers (Anna Beata Bohdziewicz, Chris Niedentahl, Tomasz Tomaszewski, Wojciech Wieteska) that show a country subsumed in an economic, social, and cultural crisis, seeking its identity between real-socialism and turbo-capitalism. Socially engaged photojournalism (Maria Zbąska, Łukasz Trzciński, Maciej Pisuk) mixes with documentary typologies shot at arm's length (Wojciech Wilczyk, Konrad Pustoła) creating a unique panorama of society at the turn of the millennium. Acclaimed foreign photographers (Carl de Keyzer, Allan Sekula, Mark Power, Rineke Dijkstra, Zoe Leonard) expand the horizon of thought about the Polish transformation after 1989 by showing its dynamics and specifics against the background of global changes. The exhibition's title references a Polish "new wave" book by Julian Kornhauser and Adam Zagajewski and signalizes a move away from self-involved Parnassianism and focus on individual issues of contemporary art in favor of reality, the conditions and manner of its representation. Missing Documents also refers to discourse ongoing in media about the role of photography in contemporary culture (discussion concerning an article by Dorota Jarecka, published in 2004 by the "Gazeta Wyborcza" daily), as well as the level of awareness of Polish intelligentsia after 20 years of transformation (the debate in "Gazeta Wyborcza" and "Odra" in 2009).

The exhibition attempts to bring together selected themes from a period of unusual intensity for the photographic medium in order to create a new image of reality after 1989. If the aforementioned debates confirmed that literature, fiction film and art have not produced works of stature to match the past two decades, then documentaries present the world that surrounds us and help to better understand it. The CCA Ujazdowski Castle exhibition is the first to show the achievements of documentalists hailing from various generations – including world-renowned masters – that focuses on a theme so fundamental as systemic transformation. Missing Documents also includes a film program attuned to showing the masters of the documentary school organized in cooperation with Kino.LAB as well as numerous meetings with documentary artists and theoreticians.

The Missing Documents exhibition opens the three-year POSTDOCUMENT program, which is part of three long-term projects organized by CCA Ujazdowski Castle: the Laboratory of the Future analyzes possible scenarios we may face in the future, the Office of Possibilities reflects upon the current condition of the institution and field of art, while Postdocument primarily responds to content per entity in its political, economic, social and cultural dimensions and attempts to capture the moment of the historicizing of the age in which we live.

Exhibition is accompanied by film programme, which includes meetings with the Artists, filmmakers and photographers.