The presence of the body and the movements are readable in the work of Jonathan Binet. Every painting and every line is the result of a premeditation which generates a route stuffed with obstacles. Also opening Michael Krebber's 'Les escargots ridiculises' and the group show 'Art by Telephone'. 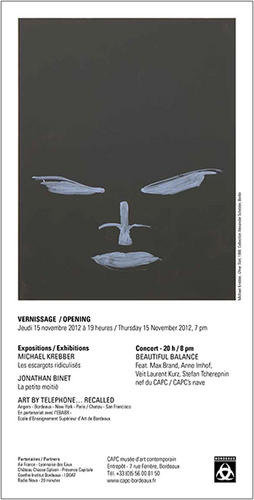 The presence of the body and the movements are readable in the work of Jonathan Binet. Every painting, every line, every spray is the result of a premeditation which generates a route stuffed with obstacles, as spontaneous as calculated: the exhibition.

For Jonathan Binet, the context is essential and the work has to adapt itself to the space. A radiator for example, influences the production of the work quite as its hanging and interacts in the way of looking the picture. The considered space becomes the condition of emergence of a performed painting.

The 650 square meters of the gallery of the exhibition crossed by Binet have an arrangement in laces. Breaks, jerks and linearity make the glance navigate from of a painting to a baseboard, from a hole in the wall to a masterpiece of sprayed work. So many round trips which reflect the fascination of the artist for the crossed chronologies and the temporal knots.

"When I met Alexis Vaillant at the CAPC, in January, I spoke to him about the intuition I had on the possibility of acting on the past from the future. […] This reflection comes from a will to justify, afterward, a thing which arrived almost accidentally. […] If the footprints, the knocks of brushes and manufacturing defects are indeed behind me, they will always face the visitor. Literally, it’s time passing. "
And this time is as well deliberate as spontaneous.

Jonathan Binet is one of the most promising artist of the new generation. La petite moitié is the first institutionnal exhibition of the artist.

Jonathan Binet was born in 1984 in Saint-Priest (69). He graduated ESADE - Ecole supérieure d'art et design of Saint-Etienne and ENSBA - Ecole nationale supérieure des beaux-arts of Paris. His work was recently showed in Paris, Torino, Wien and Zurich. He lives and works in Paris.

Michael Krebber is currently considered to be one of the most emblematic personalities of the international contemporary art scene.

Having had a major influence on the art scene in Cologne during the 80’s and 90’s and ever since, Michael Krebber has a conceptual approach to painting that he explores beyond all pictorial conventions. His practice is marked by ambivalence, subversion, intransigence, and a feigned body language. Krebber is a dandy painter.

Although he appears to be a discreet character, both perplexed and ambivalent about the very nature of his practice, he nevertheless remains an influential first-class smuggler into the world of art on both the theoretical and economic levels. The dialogue that he maintains with his students at the Staatliche Hochschule in Frankfurt, sets him up as a “literary character,” the implementer of his very own process, which has fascinated the emerging generation.

This is the first time that the work of Michael Krebber, with more than 150 pieces exhibited in the nave of the CAPC, meets the general public.

Michael Krebber was born in 1954 in Cologne where he lives and works.