Differentiating repetition in the Deleuzian sense and the question of the original in a reality shaped by simulacra are central to her approach to art. The exhibition "Image over Image" brings together many of her ground-breaking repetitions of works (by Warhol, Duchamp, Beuys...), video installations, and new works. It provides comprehensive insight into the activity of an artist who has played a significant role in the art since the 1960s. 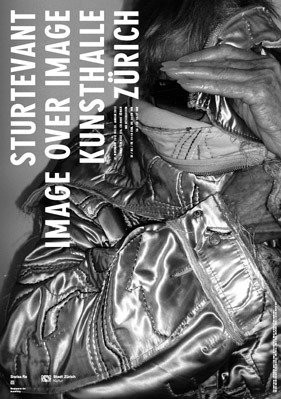 Clone, doppelganger, reflection? American-born and Parisian resident Sturtevant (born in Lakewood, Ohio) has been questioning the meaning of art and the traditional understanding of the artistic creation process for over half a century. Differentiating repetition in the Deleuzian sense and the question of the original in a reality shaped by simulacra are central to her approach to art, which is characterised by rigorous and tenacious thinking. Since the 1960s, Sturtevant has consistently repeated paintings, sculptures and installations with a view to exploring concepts like “authenticity”, “authorship” and “representation” – for example, Andy Warhol’s flowers in 1965.
The exhibition «Image over Image» brings together many of her ground-breaking repetitions of works by Warhol, Marcel Duchamp, Joseph Beuys, Jasper Johns and Félix González-Torres, six of her video installations, and works produced specially for the exhibition. It provides comprehensive insight into the creative activity of an artist who has played a significant role in the history of art since the 1960s.

In recent years, Sturtevant was invited to participate in discussions with a series of artists at Kunsthalle Zürich. She spoke with Wade Guyton, Seth Price, Josh Smith und Kelley Walker, whose works deal with topics relating to repeating and authorship in the context of a reality shaped by digital distribution media, and with AA Bronson, who, like Sturtevant back in the 1960s, caused a furore with subversive and humorous appropriations in the artists’ collective General Idea. The works by Sturtevant presented in the exhibition «Image over Image», which covers her artistic activity since the 1970s, provide an overview of the oeuvre of a visionary artist who constantly subjects both art and reality to critical scrutiny.

When Sturtevant presented her repetitions – including Warhol’s flowers – in her first solo show at the Bianchini Gallery in New York in 1965, she was met with incomprehension, reproach and indignation. Her works were understood superficially as copies. However, in repeating works, Sturtevant wanted to open up the space behind them, to initiate a critical discussion about the surface, the product, the copyright and the autonomy and the silent power of art. Warhol himself, who blithely left behind the debates about the original and reproduction and rendered the principle of uniqueness obsolete, made an original screen available to her for her flower series. With her works she also anticipated Gilles Deleuze’s ideas about difference and repetition in his 1968 book of the same name. In addition to numerous Warhol flowers, Sturtevant also produced other works after Warhol and after Frank Stella, Roy Lichtenstein, Marcel Duchamp, Joseph Beuys and James Rosenquist, whose surnames she refers to in the titles of her works – along with the title of the original – hence alluding to the iconic nature of a name, behind which a work can even disappear.
In 1974, the criticism of her approach became so intensive Sturtevant decided not to create any more art until, she said, the retards caught-up. This happened in the 1980s with the emergence of the generation of appropriation artists, including, for example, Sherrie Levine, Louise Lawler and Richard Prince. In the mid-1990s, Sturtevant shifted her focus to younger contemporaries like Keith Haring, Félix González-Torres and Robert Gober, but with the same instinct for works that would instantly become icons of art history.

Since 2000, she has been combining images from the mass media with her own film material. The resulting video installations go beyond the internal concerns of the art scene and extend the functioning of art to include the cyber world and the digital revolution. Sturtevant focuses on the ubiquity of images which surround us day in, day out and affect our perception of reality, presents stereotypes, and takes a sharp and critical look at a lethargic society which is increasingly encompassed by a digitally shaped surface and moulded by the experience industry: “What is currently compelling is our pervasive cybernetic mode, which plunks copyright into mythology, makes origins a romantic notion, and pushes creativity outside the self. Remake, reuse, reassemble, recombine – that’s the way to go.“ (Sturtevant)

An axe hacks endlessly at a blood-smeared glove, a phallic broom handle – partly covered – protrudes between two thin legs, Sturtevant, throwing her head back and forth, bellows for a payment, and a “trainer” shouts at a woman that she should chew, chew, chew the hamburger... The seven-part video installation Dark Threat of Absence Fragmented and Sliced (2003) shows endlessly repeating actions and images. Although the work refers to Paul McCarthy’s Painter (1995), it is not about painting or the aforementioned video but images of mutilation, of toxic consumption, sex and hysteria, individuals who have mutated into figures and the always slightly intoxicated crowd. Some of the sequences can also be found in the pyramid-shaped video installation Elastic Tango (2010) along with images of dollar notes and exploding atomic bombs. In terms of sound, the laughter of Beavis and Butthead is mixed with an aria and toy dogs appear to be singing “What a Wonderful World”. Elastic Tango presents Sturtevant’s exploration of the “image over image” both formally and substantively. The artist plays with the shifting of art to the arena of digital and cybernetic deception and uses the digital surface for her both critical and caricaturing cacophonous jest, in which the disgusting, banal and humorous collide in an anti- intellectual world.

Publication:
The publication Sturtevant. Image over Image which contains numerous images and texts by Daniel Birnbaum, Bruce Hainley, Fredrik Liew, Paul McCarthy, Stéphanie Moisdon, Beatrix Ruf and the artist was produced in cooperation with the Moderna Museet and is published by JRP|Ringier. 108 pages, texts in English and Swedish. ISBN 978-3-03764-282-5, CHF 27.00