In this exhibition Braeckman presents a carefully chosen selection of new photographs culled from the untitled publication recently released by Roma Publications. While the exhibition by Zarina Bhimji develops in two phases with the screening of two film: Yellow Patch and Waiting. 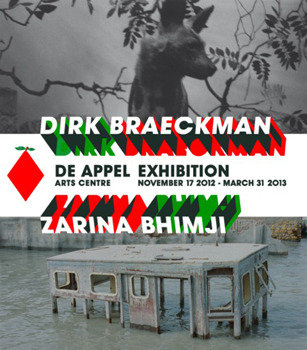 This winter de Appel arts centre simultaneously presents solo projects by the Belgian photographer/filmmaker Dirk Braeckman (1958) and the British artist Zarina Bhimji (1963). Braeckmans sensitive and large-scale photographs in shades of grey do not tell elaborate stories but are charged with an atmosphere which makes them "tick away like time bombs," in the words of the author Luc Sante. The suggestive force and narrative potential of images are just as essential for Bhimji, whose latest film Yellow Patch (2011) has its Dutch premiere in de Appel arts centre.

In this exhibition Braeckman presents a carefully chosen selection of new photographs culled from the untitled publication recently released by Roma Publications (a cross between an artist's book and a catalogue raisonné). From his extensive archive of negatives Braeckman selected "new images," that have never been printed and that will be premiered in de Appel arts centre. Braeckman will equally reveal one of the lesser well-known aspects of his oeuvre in de Appel: a new film for the first time, which elaborates on previous film experiments.

Yellow Patch is Bhimji's second large film production. The 35mm film was entirely shot in India and was inspired by trade and immigration routes across the Indian Ocean. Beautiful close-ups of desolate Haveli palaces and colonial offices in the port of Mumbai are coupled with atmospheric images of the desert and the sea and accompanied by an evocative soundtrack.

Waiting was shot in East Africa in a factory used to process Sisal and has an abstraction that hovers somewhere between film and painting. The washed-out colour of the hair-like material, the light, and the interior of the factory create a saturated monochrome that, combined with the film's soundtrack, becomes immersive.

In Braeckman and Bhimji's work, ambiguous and 'open' recordings of architecture, landscapes, objects and spaces are the signifiers. They seem to emphasise the intrinsic expressive power of the image and invite the audience to a 'slow' reading of the work.