Tracing the Century highlights drawing's fundamental role as a catalyst and vehicle for change in modern and contemporary art. Accompanying the exhibiton will be a new commission by Matt Saunders entitled Century Rolls. Exhibited as silver gelatin prints, Saunders' enigmatic works on paper are created by projecting light through a drawing or painting to expose a sheet of photosensitive paper. 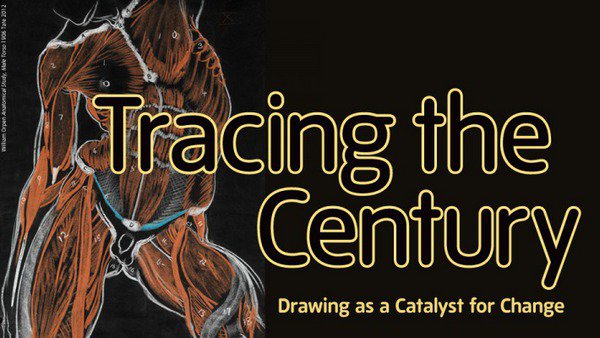 Tracing the Century, presented at Tate Liverpool this autumn, highlights drawing’s fundamental role as a catalyst and vehicle for change in modern and contemporary art. The exhibition includes around one hundred artworks from the Tate Collection together with key loans by artists such as Sara Barker, Leon Golub, Jasper Johns, Julie Mehretu, Matthew Monahan, Richard Tuttle and Hannah Wilke. Programmed in parallel with Tracing the Century, a new commission by Matt Saunders in the Wolfson Gallery will look at new drawing practices.

Tracing the Century has at its heart artworks based on the human body and the inner self, opening up the conversation between figuration and abstraction that characterised art in the twentieth century. Rather than approaching abstraction and figuration separately, the exhibition will integrate these genres to explore the continuous slippage between the two. The exhibition will move from the preliminary sketch to painting, sculpture, photography and film, acknowledging the broader role drawing played within modernism. In Tracing the Century, works are brought together into small, often trans-historical groupings: for example a sequence of works on paper by Paul Cézanne, Paul Klee, Richard Hamilton, Lee Bontecou and Julie Mehretu proposes drawing as a means of conjuring imaginary worldscapes. The groupings demonstrate points of contact or crossroads between artists through the practice of drawing.

Drawing’s ability to transcend a fixed set of materials and conventions hasensured the medium’s vitality and power to stimulate change. A number of works in the exhibition, such as Anthony McCall’s Line Describing a Cone 1973, serve to erode the conventional definition of drawing as a static line on a two-dimensional plane. In McCall’s work, visitors can explore the projected line by moving around it, interacting with it and moving within the cone of light created.

The exhibition features a number of works presented at Tate for the first time since acquisition, such asWilliam Orpen’s meticulously detailed representations of the human figure, Anatomical Studies 1906, used by students to study anatomy during the early part of the century. Important works on paper by Raymond Pettibon, and a major installation of twenty-six drawings by Fernando Bryce will be on display. A trilogy of animated films by William Kentridge, rarely seen together, will also be exhibited.

Accompanying Tracing the Century will be a new commission by Matt Saunders entitled Century Rolls. Exhibited as silver gelatin prints, Saunders’ enigmatic works on paper are created by projecting light through a drawing or painting to expose a sheet of photosensitive paper. Alongside these prints will be a new animated film made from a huge number of ink on mylar drawings, edited into hypnotic moving images. Saunders’ inventive use of materials, which unites drawing, photography and film, offers another way to engage with the themes within Tracing the Century.