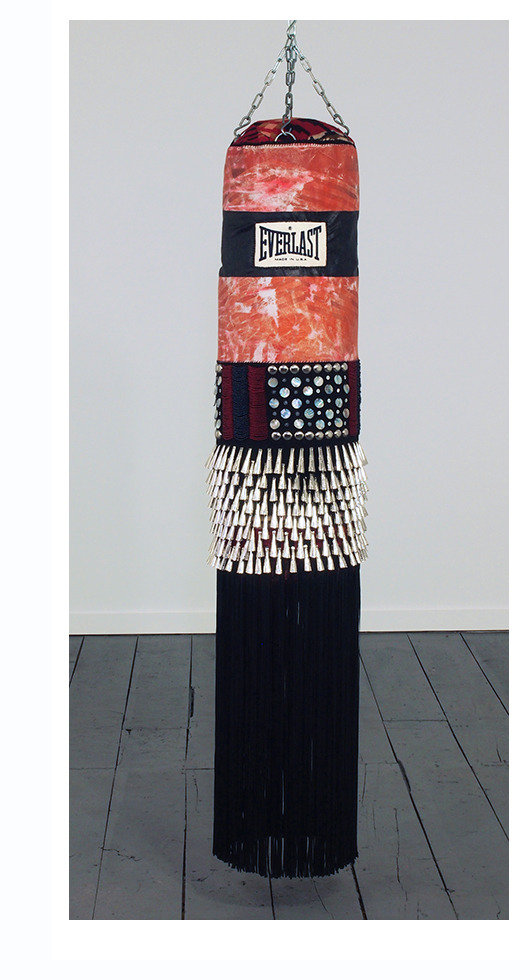 Jeffrey Gibson grew up in major urban centers in the United States, Germany, Korea, England and elsewhere. He is also a member of the Mississippi Band of Choctaw Indians and half Cherokee. This unique combination of global cultural influences converge in his multi-disciplinary practice of more than a decade since the completion of his Master of Arts degree in painting at The Royal College of Art, London in 1998 and his Bachelor of Fine Arts degree in painting from the School of the Art Institute of Chicago in 1995.

Gibson’s artwork intermingles elements of traditional Native American art with contemporary artistic references. Thus powwow regalia, 19th parfleche containers, and drums are seamlessly merged with elements of Modernist geometric abstraction, Minimalism, and Pattern and Decoration. Here there is an echo of Frank Stella, Josef Albers, and Lucio Fontana – canonized in our current dialogue which has little or no inclusion of Native American art which Gibson provides comparable weight and equivalence.

In his Building Blocks constructions, Gibson uses deer rawhide, immediately recognizable as a quintessential material for many Native American tribes, to stitch skin-like coverings for multiple stacked cement blocks. The taut hide is painted with large rectangles of saturated color, a nod to the aesthetics of rave culture of his youth, the vibrancy of Native American powwows, and the severity of Donald Judd. The EVERLAST punching bags hand-adorned with tin jingles, beadwork and sewn fragments of paintings, exemplify the diametrical positions of power and domesticity, of innocence and violence. These are objects of pure beauty and brutality.

There is no simple locus to position Gibson’s artworks. His sculptures and paintings take on the roles of rebels and nomads.

Gibson's artworks are in the permanent collections of many major art museums, including the Museum of Fine Arts, Boston, the Smithsonian's National Museum of the American Indian, and the Denver Art Museum. Forthcoming solo exhibitions include the National Academy Museum in New York, The Institute of Contemporary Art in Boston, and the Cornell Museum of Fine Art. Gibson has recently joined the faculty in the Studio Arts Program at Bard College and is a 2012 TED Foundation Fellow. He is represented by MARC STRAUS (NYC) and Samson Projects (Boston).