Letters From Los Angeles / Out of the Racks 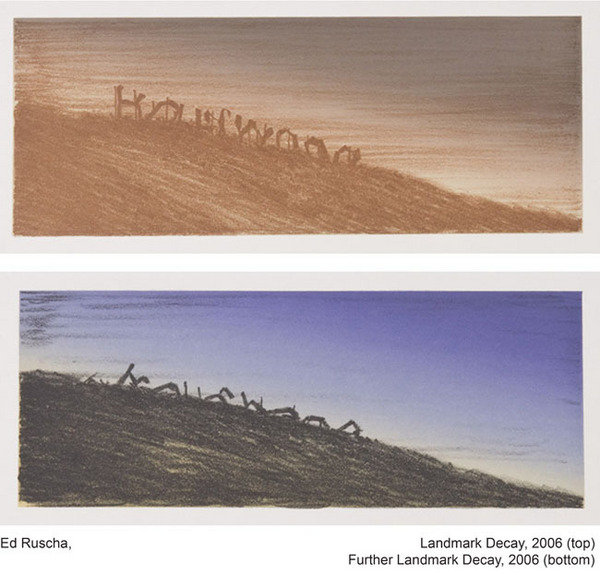 Jack Rutberg Fine Arts in Los Angeles will present an expansive exhibition titled "Letters from Los Angeles: Text in Southern California Art" which will include works by more than thirty contemporary L.A.-based artists who incorporate elements of words and letters in their work.

Co-curated by Aldis Browne and Jack Rutberg, the exhibition opens with a reception on Saturday, November 17th from 5:00 to 8:00 PM, with a number of the artists in attendance. The exhibition runs through Saturday, December 22nd at Jack Rutberg Fine Arts, located at 357 North La Brea Avenue.

L.A.'s association with typography in the visual arts is perhaps unique. Text has historically been ubiquitous on the city's streets with political and gang graffiti, and L.A.’s ever-present billboards that surfaced as far back as the onset of Southern California's car culture and highway system.

While other cities are represented by monumental structures such as New York's Empire State building, the Acropolis in Athens, Big Ben in London and the Eiffel Tower in Paris, L.A.'s most prominent symbols are text – most iconic is the Hollywood Sign, along with the great movie studio logos of MGM, 20th Century Fox, Warner Brothers, etc, which have been familiar to billions of people in each generation around the world for nearly a century. So it is perhaps understandable that Los Angeles has a pronounced affinity for the usage of text in the visual arts which distinguishes it from its historic precedents.

Typography in modern art first surfaced in the last decades of the 19th century when artists such as Toulouse-Lautrec, Cheret and Steinlen portrayed the demi-monde of Paris and in the process celebrated specific cafes, performers and liquors and other commercial products. Later, the abstract use of typography appeared in many art movements of the 20th century, from the Russian Constructivists and Bauhaus, Dada, Surrealists and Pop art movements.

The range of approaches is as individual as the artists themselves. The vast and diverse ways Southern California artists incorporate words, numerals and text into their compositions reflects an aesthetic that might be seen as a logical antecedent to the current spotlight on contemporary-graffiti and tattoo art.

Out of the Racks: Not-Recent Acquisitions

A once in a 30 year exhibition featuring over 120 works.