"Invented Acoustical Tools". Instruments 1966 - 2012. This exhibition project is the first comprehensive presentation of this significant group of works. "Some of the instruments I have developed are more 'theoretical' rather than acoustical tools." (T. Conrad) 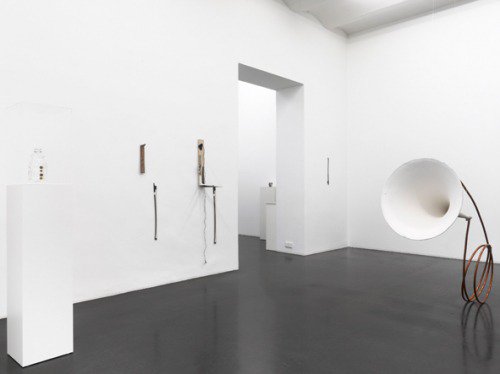 Under the title "Invented Acoustical Tools" the artist, filmmaker and musician Tony Conrad (*1940, Concord NH) shows in his 4th solo exhibition at Galerie Buchholz an almost complete overview of his self-developed musical instruments from the years 1966 - 2012. This exhibition project is the first comprehensive presentation of this significant group of works.

In late 1962 I began playing improvised music with La Monte Young, Marion Zazeela, John Cale, and Angus MacLise in a group whose purpose, as I understood it, was to uproot and dismantle the cultural function of the Western serious music composer. It was helpful in this nihilistic undertaking to have other classical traditions as models for comparison, and classical Indian music, with its emphasis on sustained sounds and finely regulated pitches, was certainly an influence for each of us in different ways. Two years earlier I had attended a lecture on South Indian music at Harvard by Professor H. S. Powers in which he had explained how the elaborate vocal tradition of this music arose through a genealogical relationship it bore with the vina, a stringed instrument with very deep frets that allowed for “pulling” pitches in an elaborately nuanced way. By comparison, I saw that the Western instrument most responsible for the classical tradition was the piano – and this understanding of the linkage between the form and structure of a central instrument and the corresponding evolution of a compositional practice impressed me deeply. Clearly, if this were the case, the invention and modification of instruments could be viewed as a meta-compositional intervention, or even as the inauguration of a virtual “compositional” modality. And of course the historical record bears out the accuracy of this perception, both on a grand scale (as with the introduction of the violin family, for example) and on an individual basis (as in the instance of idiosyncratic musicians such as
Harry Partch or Conlon Nancarrow).

In 1966 I saw the Buchla 100 audio synthesizer at New York University, and understood that it would not and could not make any of the sounds I was interested in. The synthesizer’s sonic architecture, one might say, had been hardwired into place with the design parameters that had been chosen for it by Don Buchla (engineer) and Morton Subotnik (composer). As I perceived things, the machine was in effect the composition, in and of itself; it imposed performance constraints according to a pre-programmed architecture. Subsequently I decided to construct musical “pieces” by “composing” machines myself, to generate specifically designed sounds. I needed sound for my film The Flicker, just then being completed, so I patched together a custom array of electrical and electronic units – in effect, a custom one-purpose audio synthesizer -- on which I could perform the soundtrack. Over the next several years, I learned basic electronics and built a number of simple custom oscillators and other devices. Then one day in 1969 I hooked all of my units together and made an “electronic music” recording. When I listened to it being played back, I had to tell myself that I could have made much better music by simply playing my violin, and I stopped constructing electronic circuits on the spot.

All during the 1960s, both alone and with friends, I had been improvising sounds. But because at that time I still regarded my violin work with Young, Zazeela, and Cale to be a privileged work stringently subject to its own profound artistic and ideological commitments, I almost never played drone-based music on the violin; instead I enjoyed making sounds in many other ways. John Cale, Angus MacLise, and I would get together and record a jam; some of these have been released on Table of the Elements and elsewhere. I played a metal ladder with a baseball bat; I bowed on guitars and blew on a “Tibetan” horn made out of a mike stand; I played feedback through a reverb chamber; I played through a swung loudspeaker in a can at the end of a wire; and I played my lute-guitar by completely loosening one string and hand-tightening it by pulling it against the lute-guitar’s body. This last tactic reminded me of the vina with its deep frets, only my technique made pitch articulation even freer. To take this yet another step I made the “limp-string,” which had a long fret-bar and was amplified. Later I simplified the limp string approach by making an “electric” version out of a shelf bracket (or L-bracket), and recently I have played loose strings that simply dangle from the bridge of my violin.

In the early 1970s I began to play sustained violin sounds again, often accompanied by other performers and film projections. To provide a bass I built a long string drone, a kind of three-string amplified “monochord.” Much later an electric cello and electric bass also served this purpose. But in the late 1970s I stopped all of this and devoted myself to recording piano improvisations for what I constructed as a single large work, Music and the Mind of the World. At one extreme of this piano exploration was the programmed piano vorsetzer, which played all of the “c”s on the keyboard. It was only in 1987, with the first of my compositions titled Early Minimalism, that I returned to playing sustained sounds on the violin.

Since the mid-1990s I have had many opportunities to perform in public, both solo and with others either under my direction or in collaborations. For me the collaborative performances recalled the free inventiveness I had enjoyed during the 1960s, and frequently led me to perform on new instruments. For instance, when I was invited to play with three turntablists, I constructed a “phonharmonica”, modeled loosely on Benjamin Franklin’s glass harmonica but which used phonograph records instead of glass bowls, and was played with phonograph needles instead of wet fingertips. I had been fascinated for some time by the noisy sounds of bowed flat surfaces (rather than bowed strings), so while playing with a drummer I slit open several drums and bowed on the skins. I could also amplify the resulting sounds with a hand-held contact pickup, and this enabled the production of a surprising range of wild sounds. As a solo performance I decided to “play” some compositions by La Monte Young – not by performing the scores’ instructions, for which Young ordinarily requires a vast fee, but by bowing the stretched piece of paper on which the scores were printed. Similarly, I played dollar bills and other sheets of various materials.

Some of the instruments I have developed are more “theoretical” rather than acoustical tools. The quiet grommet horns, which exploit the sounds produced by air rushing through holes of various sizes, are impractical for public performance, as are several instruments that use bowed “strings” made of unorthodox stretched materials – wooden dowels, a metal band, bead chain, thread, or hair. The Bowed Film from 1974 is a personal cinema work that is viewed only by me, with stereo sound produced by looping the film over my ears. The mirror monochord is a wire with a small mirror attached to it which was bowed to agitate the mirror and recorded on video. Another cinema-related device is the 16mm projector that has been modified to pick up sound in its aperture gate, so that the recorded magnetic material is played back at a radically intermittent rate. There is also a model 12-tone equal-tempered mesolabe, made to a specification devised by René Descartes as a modification of the mesolabe of Eratosthenes.

All of these instruments – except one – have been made for one person to play. The interactivity of a two-person instrument is difficult to achieve meaningfully, but I look on the double-cuirasse instrument I developed in collaboration with Jennifer Walshe, in which the performers are connected physically by amplified wires stretched by their bodies, as an exciting new area for development.

Opening reception on Friday, September 7, 2012, 6-9 pm
Tony Conrad will be present at the exhibition opening.