His work, often developed in series, reduces the formal vocabulary he investigates to its most minimal structure. The series on view is entitled Cliche' and consists of five varied, abstract subjects rendered in a stamp-based process on plaster supports. 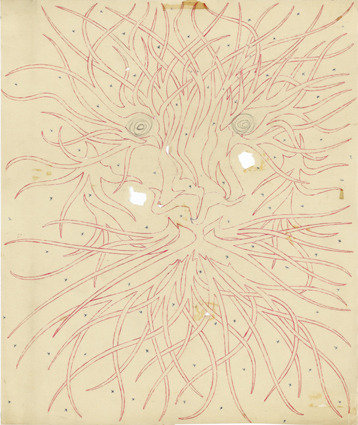 The engagement with a vocabulary of form from different historical articulations of abstraction is a central frame of reference in the artistic practice of Florian Pumhösl (b. 1971 in Vienna where he lives and works). His work, often developed in series, reduces the formal vocabulary he investigates to its most minimal structure.

Florian Pumhösl, in his fifth solo exhibition with Galerie Buchholz, will install a series of paintings in both gallery spaces in Cologne. The series on view is entitled Cliché and consists of five varied, abstract subjects rendered in a stamp-based process (cliché-print) developed by the artist on plaster supports. Each abstraction is stamped on a sequence of three plaster panels of ascending dimension. This principle of enlarging the same composition in three sizes derives from the Constructions in Enamel, often called telephone paintings, by László Moholy-Nagy from 1923. Florian Pumhösl sees them as an early example of how the space of an exhibition is implied within an abstract composition. With this as his instructive point, Florian Pumhösl installs each of the 3 panels within a group at a distance based upon the dimensions of the panels themselves, thus fixing each trio in its own spatial formation. Whereas the distances between each panel within a group are derived from the dimensions of the panels themselves, the distances between the trios in the exhibition installation is based on the proportions of the given, specified space in which these works hang.

Alongside his own works, Florian Pumhösl is showing a selection of production designs by book designer Paul Bonet (1889-1971). Paul Bonet was one of the central figures in French book design in the 20th century, and is today known primarily for his elaborate embossed, stamped book bindings in leather and board. His extensive design work accompanies publications on art, literature and the history of ideas in France in the 20th century. It is a characteristic of his work that his designs, even for artist books or books illustrated by artists, have little more than an associative relationship with the subject’s actual formal program. Even the book’s title or the author’s name often plays a subordinate role in Bonet’s composition. That is to say, Bonet often stamps a pattern on the binding that is entirely abstract and whose composition initially springs from the craft tradition and ornamentation patterns of embossed book binding which he himself innovated. This contrasts with modern, publicity-orientated book covers that are based on title illustrations or title typography. Stylistically, Bonet is unmistakably rooted in French Art Deco whose semi-abstract formal potential he developed and expanded to the utmost extent throughout his 50 years in the trade. In so doing, Bonet radically exploits the space between pure Art Deco design, modern quasi-calligraphic book ornamentation and geometric abstraction.

The design drawings by Bonet shown in the exhibition contain abbreviated technical instructions denoting systematic selections from color charts and the range of possibilities available for the metal clichés used in the leather embossing and printing process. In these drawings, one can grasp the elements of abstraction that are achieved by gradually distancing and varying from an aesthetic tradition or a formal canon. Through this, the drawings provide an insight into Bonet’s methods and his unique language of reproduction and variation.

Florian Pumhösl’s has most recently been shown in a solo exhibition at Kunsthaus Bregenz and in a joint exhibition (together with Liz Deschenes) in the Chicago Art Institute. Currently, wall objects and 16mm films by the artist are on view in “Textiles: Open Letter” in the Abteiberg Museum in Mönchengladbach (through November 10).