The festival will present contemporary perspectives on film, video art, and other time-based art forms, exclusively broadcasted on TV and on live stream. 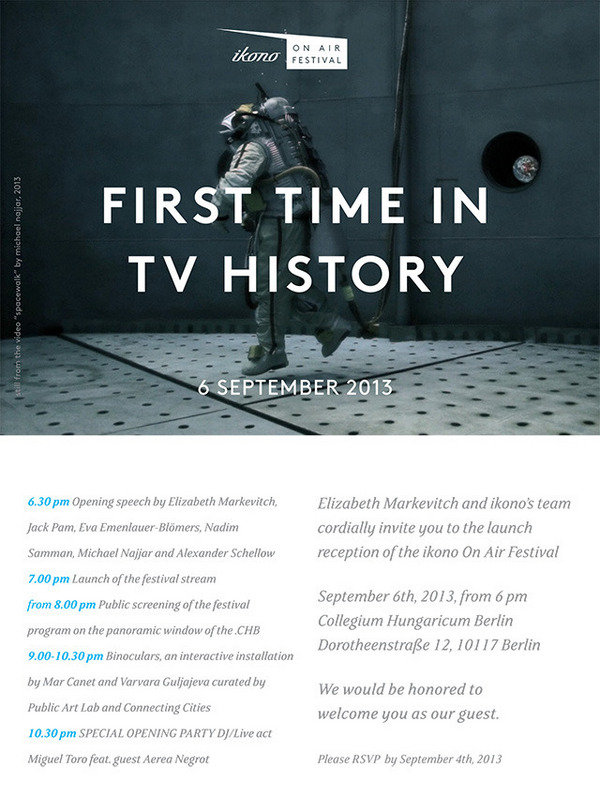 For the first time in TV history, ikono is launching an arts festival that will take place exclusively on TV and live webstream. From the 6th to 29th September 2013, the ikono On Air Festival will air a daily program of international video artists, featuring Bill Viola or Anthony McCall and over 100 established and emerging artists. The festival will be able to be seen through HDTV channels ikonoTV and ikono MENASA, which currently reach over 30 countries worldwide, and will also be available on all mobile devices such as computers, tablets and smartphones. In Berlin, cafes, bars and cultural institutions will become a part of the event by holding public screenings of the ikono On Air Festival.

The ikono On Air Festival follows ikono’s vision of building a visual bridge between periods of time, various movements and disciplines throughout art history. Contemporary perspectives on filmmaking and other time-based art forms from the last decades are linked with ikono video clip highlights featuring art from antiquity to modern classics. The ikono On Air Festival invites the audience to trace the perception of time within the arts, while the featured artworks challenge ideas of social space, everyday life and the possibilities of cultural communication.

The official ikono stream will be up and running on the 6th of September at 7 pm (German time) – Right here, don’t miss it! ikono is excited to announce a pioneering moment in TV history: for the first time ever, ikono is launching an art festival exclusively broadcasted on TV and on live stream. From the 6th to the 29th of September you can watch video art from the last 40 years. The daily program will feature artworks from established and emerging artists from all over the world. The festival will present contemporary perspectives on film, video art, and other time-based art forms, exclusively broadcasted on TV and on live stream. Wherever you are, you can now become part of a global community of art lovers. Stop by the festival blog and sign up to the newsletter to receive the latest news about when the live stream will be available.