Featuring standing and reclining figures, torsos, reliefs and drawings as well as smaller, more intimate sculptures, this exhibition explores Swiss artist's innovative approach to traditional sculptural motifs and his artistic language that spoke to the freighted past of his medium, whilst simultaneously looking towards its future 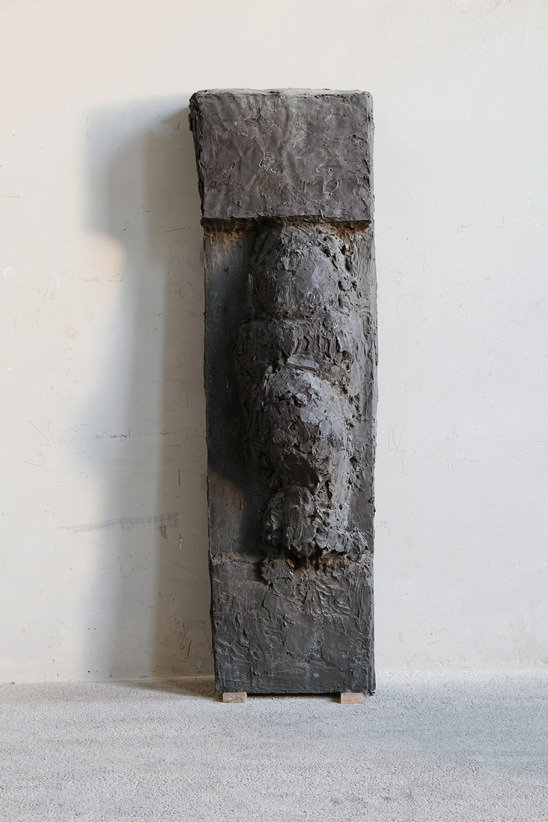 'With sculpture, I give my opinion – even when it shocks or upsets people and is maybe wrong, I can express myself through my own work'.
Josephsohn

Hauser & Wirth is proud to present a tribute to the late Swiss artist, Josephsohn, spanning 60 years of the artist's practice. Featuring standing and reclining figures, torsos, reliefs and drawings as well as smaller, more intimate sculptures, this exhibition explores Josephsohn's innovative approach to traditional sculptural motifs and his unique artistic language that spoke to the freighted past of his medium, whilst simultaneously looking towards its future. The exhibition also acts as a preview to Josephsohn's forthcoming solo exhibitions at Modern Art Oxford and Yorkshire Sculpture Park, both opening in 2013.

Over six decades, Josephsohn experimented with geometric reduction, figuration and abstraction as modes to depict the human form. His reclining figures and torsos are mountainous and boulder-like, the gashes in their roughly-hewn surfaces lending them a sense of movement despite their weighty mass. His standing figures, such as 'Untitled' (1969), are slender and evocative, yet featureless and anonymous. Built up in plaster, before being cast in brass, they echo the caryatids of Greek antiquity, whilst their voluptuous forms convey a sense of vitality, intensity and vulnerability.

Josephsohn's drawings, on view in the upstairs gallery, were translated into three-dimensional form with his reliefs. These works range from a radical simplification of geometric shapes, as seen in the early work, 'Untitled' (1950), to a complex configuration of dense forms, seen in 'Untitled' (2003). Together with the figures, they highlight the artist's architectonic approach to his sculpture. As explained by Ulrich Meinherz, who worked closely with Josephsohn, in a recent interview with Charlotte Edwards, 'Even though the pieces look amorphous and un-formed, they have a clear axial orientation, with a front, back and sides. They build a space around themselves'. (World of Interiors, November 2012)

Born in 1920 in Kaliningrad, East Prussia, Josephsohn travelled to Florence in 1938, where he briefly studied sculpture at the Academy of Art. Following the implementation of Fascist laws in Italy in 1939, Josephsohn emigrated to Switzerland, where he began an apprenticeship in the atelier of sculptor Otto Müller. After his apprenticeship, Josephsohn established his own studio in Zurich, where he lived and worked until he passed away in August 2012.

Josephsohn's works will be presented in major solo exhibitions at Modern Art Oxford and Yorkshire Sculpture Park, opening in February 2013 and May 2013, respectively.