Works 1967 - 1996. The exhibition combines texts, sculptural installation and photographically realised works as well as photographs. Early pieces from the 1960s are set alongside text pieces and a floor-based sculpture. Later groups of photographs emphasise the point at which he adopted the camera as his primary tool for producing art rather than documenting it. 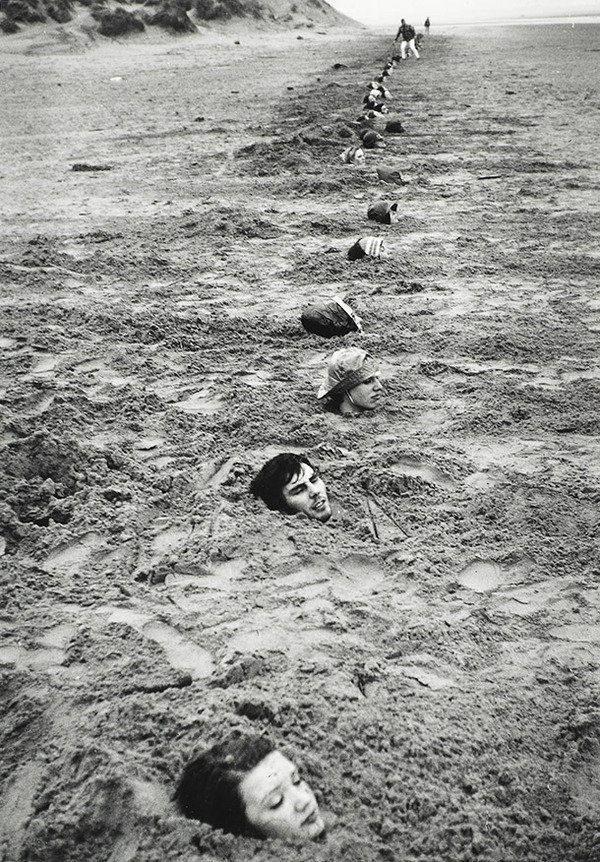 Maureen Paley is pleased to present the first solo exhibition at the gallery by Keith Arnatt, focusing on works made between 1967 and 1996.

To highlight Arnatt's conceptual approach, this survey combines texts, sculptural installation and photographically realised works as well as photographs. Early pieces from the 1960s in the form of artist's prints are set alongside text pieces and a floor-based sculpture created in accordance with Arnatt's instruction. The work 'KEITH ARNATT IS AN ARTIST' questions the role of the artist as a whole. Arnatt was also interested in expanding the meaning and function of an artwork in terms of its relationship to the discrete acts of bringing a work into being. Of 'Liverpool Beach Burial' he says:
'I was teaching a sculpture course at Manchester College of Art and I discussed with my students the possibility of sculpture’s being what I called “situational”. By this I meant that the focus of attention could be upon what one did with an “object” rather that the object itself. Context itself became the determining factor in what we did. In other words, revealing an aspect of a particular (physical) context became the point of our activity... The focus of attention was on behavior patterns themselves. Both the beach-burial and my “self-burial” piece were the outcome of these kinds of considerations—they were both essentially “behavioristic”.'
Six years: The dematerialisation of the art object from 1966 to 1972 ..., Lippard, Lucy R., Praeger 1973, p50.

Later groups of photographs such as ‘Walking the Dog’ and ‘The Forest’ from the 1970s and 80s reveal Arnatt’s analytic method of working and emphasise the point at which he adopted the camera as his primary tool for producing art rather than documenting it. Series from this period use an observational style influenced by Arnatt’s awareness of the typological preoccupations of artists and photographers as diverse as Bernd and Hilla Becher and Robert Adams.

Keith Arnatt tackled conventional ideals in photography with rigour and wit, while participating in the emergence of conceptual art during the 1960s and 1970s. This exhibition seeks to place works from this period within a contemporary context.