Alex Davies: 'Swarm', which presents individuals with an evolving audio visual environment in which the audience themselves. Questions of loss, impermanence and selfhood have always been central issues in the work of Lindy Lee. Remake is a new video installation by Emil Goh, a continuation of his interest in film. 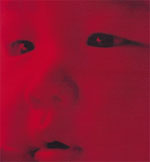 Swarm presents individuals with an evolving audio visual environment in which the audience themselves are drawn in as fragments in an ever changing mediascape.

The work focuses on the dynamics of the live surrounding environment as a basis for subsequent acquisition and manipulation of data. Individuals are tracked as they move within the space and subsequently sucked into the image plane.

The behaviour of the ever increasing database of phantoms shifts from swarms of activity to lingering solitary movements. Sounds swell and recede in unison with the ebb and flow of the imagescape. Although individuals only inhabit the physical space for a transient period, their presence echoâ€™s temporally as they re-appear in the environment as neurotic shifting fragments in space.

Alex Davies is a digital media artist currently working in the areas of sound and image production. His work spans a diverse range of different media including film, network, realtime audio-visual manipulations and responsive installations. He has produced and presented work both nationally and internationally including recent collaborations with Timeâ€™s Up (AT).

Questions of loss, impermanence and selfhood have always been central issues in the work of Lindy Lee. Since the early 1990s, her work has been directed by her interest in Zen Buddhism. One of the most fundamental questions in Zen relates to the question of what â€˜selfâ€™ is - especially given the universal certainty of death. In Buddhism, birth and death are considered the cardinal realities of life. Birth and death are usually conceived of as the bookends of life but in Buddhism birth and death are not only nominated as significant markers to the beginning and end of individual existence but also as the actuality of moment to moment existence. The reality of self is that it is a multiplicity of things internalised and activated by context and conditions. Everything, including self, is subject to continuous change. In exploring issues concerning â€˜selfâ€™, Leeâ€™s work also engages in issues of identity. Lee is a first generation Chinese Australian, however, in Zen terms, the actuality of â€˜selfâ€™ canâ€™t be confined by categories of either / or, Chinese or Anglo or whatever, and yet, un-paradoxically, selfhood has a very exact form; the usual mistake made is to believe that this form has permanence.

The exhibition consists of approximately sixty Chinese accordion books arranged in rows across the Artspace floor. Each book is based on a photographic portrait of individual members of Leeâ€™s family. For each family member, there are three or four books using photographs from various ages. The family line starts with Chinese ancestral faces, which evoke notions of a traditional past. The earliest photographs date back to China of the late 19th century and are of Leeâ€™s great-grandmother. Photographs of her parents, older brothers and sister represent a time of difficult transition â€“ the move from postwar revolutionary China to â€˜whiteâ€™ Australia. The books of faces continue down through to the youngest generation where the â€˜purityâ€™ of â€˜Chineseâ€™ blood becomes mixed with â€˜Angloâ€™ blood â€“ giving rise to further mutability of identity and self.

The exhibition is dedicated to my nephew, Benjamin Reece Lee who died on June 4, 2002 at the age of 23 years, and to my Mother-in-law, Clare Scott-Mitchell, who at the time of writing, is living out the last weeks of her life.

Thanks to my husband Robert Scott-Mitchell for photographic re-mastering and digital image manipulation and for being the studio dogsbody.

REMAKE is a new video installation by Emil Goh, a continuation of his interest in film. In earlier works Goh investigated types of shots and motion control; - in STREET (2001) the camera tracks pedestrians as if from the point-of-view of someone sitting at a roadside cafÃ©. In BETWEEN (2000) the camera pans 360 degrees in a series of domestic interiors, and in ONE MINUTE IN 109 (2002) the camera is speedily transported by a series of escalator belts up and down a busy department store.

REMAKE at Artspace is the realisation of Emil Gohâ€™s film-viewing fantasy situation, making full use of the scale afforded by the gallery space and screening narrative works in an unexpected way.

REMAKE looks at the same story being told in three different ways. It is the simultaneous screening of a French film and its Hong Kong and American remakes side-by-side.

The films all start chronologically within a few minutes of each other, first with the French original, followed by the Hong Kong remake and then the American version.

Image: a work by Lindy Lee.