Dieu est un fumeur de havanes. How to exist in this vast world and these reconstructed societies when faced with others and oneself? Certainly, we share cultural and religious symbols that artists often seize upon with distance and detachment. A group show with works by Candice Breitz, Joao Maria Gusmao & Pedro Paiva, Manuel Ocampo, Pascale Marthine Tayou... Thomas Hirschhorn presents Flugplatz Welt / World Airport: his installations are conceived as collages, immense heterogeneous and complex assemblages that invade the place. 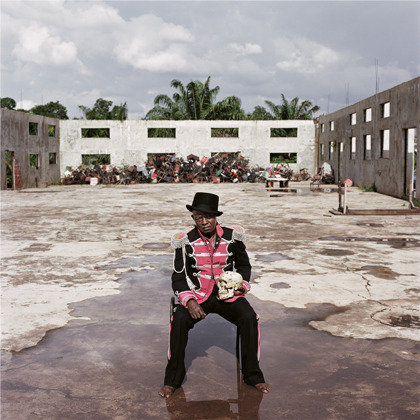 Thomas Hirschhorn’s installation Flugplatz Welt / World Airport, which occupies a whole room of the museum, dates from 1999 and was originally produced for the Venice Biennale.
Being an artist means taking responsibility, too much responsibility. I’m not afraid of destabilization, I want to combine what cannot be combined, I want to be the subject, I want to provide forms, it’s necessary to give form to an affirmation, the affirmation doesn’t remain mere theory. Through my work, I want to provide an answer to the question: where are you, comrade? It’s about producing work that has energy, that is powerful, that is a bit biting, it’s not about what art is or isn’t. I use art as a tool, a tool for discovering the world, as a tool to confront myself with reality, and as a tool for deeply examining the period we live in. I am an artist, a worker, a soldier. (Thomas Hirschhorn, 2002)

The Swiss artist Thomas Hirschhorn installed an incredible number of objects reminiscent of an airport over an area of more than 400 m2. One finds not only the runway, the planes in the colors of various airlines, the control tower, and the typical neon airport lighting: Hirschhorn also adds numerous other elements, such as gigantic silver spoons, altars with known-brand shoes, as well as panels on which a profusion of newspaper cuttings evoking a highly varied range of subjects are displayed. These diverse elements were made of inexpensive materials (one of the hallmarks of his work): foils, maps, cardboard and adhesive tape used in abundance, completed with utilitarian objects such as chairs, suitcases and screens.

Hirschhorn’s installations are conceived as collages, immense heterogeneous and complex assemblages that invade the place where they are presented and put it under tension. As he explains, his “two dimensional thoughts” are thus translated in space “to remain in reality”. The choice of everyday, “precarious” materials, in opposition to noble, “exclusive” materials (which exclude, in the literal sense of the term), is part of his strategy of not placing a barrier between the artwork and the viewer and of creating a direct relationship of equals. Rejecting the idea of an æsthetic and sanctified presentation, too elitist according to him, he aims to breathe energy which helps establish a dialogue with the artwork. Hirschhorn believes in the autonomy of art, effacing himself from this dialogue with the viewer. The disordered profusion of elements and the overabundance of information in his artworks become a mirror of reality and push visitors to orientate themselves by themselves.

Flugplatz Welt / World Airport deals with the question - so determinant today - of globalization and its collateral, often paradoxical effects: “Macro-isolation, selfisolation, and particularities - ethnic, religious, social, linguistic, cultural... - local divisions, regional and private wars, war lords all tend to separate one entity from another. This shrinkage and splitting is what I wished to explore in Flugplatz Welt / World Airport”, the artist explains. However, certain elements provide guidelines (of reflection): the altars represent specific dimensions (spirit - body - soul), the assorted books invite reading, while the silver spoons are meant to be an ironic reflection of the expression according to which some are born with them in their mouths, tracing a demarcation line in this globalized and interconnected world which decides between winners and losers. Flugplatz Welt / World Airport is not however an overtly political artwork in the sense that it doesn’t take a position and, because of its plethoric nature, denies any explicit and singular reading.

Thomas Hirschhorn was born in 1957 in Berne, Switzerland, he lives and works in Aubervilliers, France.

Each era has its own beliefs with which to reassure and project itself; a constantly renewed quest for meaning to affirm the presence of Man at the centre of a universe that lies beyond his understanding, because since the dawn of time, the rational and the irrational have rubbed shoulders, science and faith oppose one another as much as they complement each other.

When all the involved calculations prove false, and the philosophers themselves have nothing more to tell us, it is excusable to turn to the random twitter of birds, or toward the distant mechanism of the stars. (Marguerite Yourcenar, Memoirs of Hadrien)

Unexplained phenomena thus give rise to myths and feed the imagination, as in the artworks of João Maria Gusmão and Pedro Paiva. Their 16 mm films stage enigmatic short stories (here, a mysterious shamanic dance with a serpent; there, an animal skeleton in movement; elsewhere, the exploration of a rocky recess lit by the glow of a flaming hand), numerous strange sequences that seem to capture paranormal experiences or ancestral rites. Halfway between anthropological research and pataphysical tales, the two artists become observers of a world in which magic and spirits are indistinguishable from the real.

Under the starry ceiling lies a sublunar world, the one we inhabit and which we thoroughly scrutinize and explore. Attentive to his environment and wishing to penetrate mysteries, Man constantly invents new tools: some of them are technologically sophisticated while others are more empirical. Trevor Paglen's starry heavens, with their falsely romantic allure, in fact capture the twinkling of satellites and other observation devices pointed at the Earth while the installation titled Lantern by Francisco Tropa presents itself as a surprising optical instrument which triggers the apparition of an abstract landscape in movement and evokes a possible elsewhere, both infinitely big and infinitely small.

While scientific observation diversifies possible interpretations and sharpens our perception, the mystery remains intact. Science itself, when it seeks to explain the universe, becomes poetic and speculative like the fanciful licence found in Björn Dahlem's sculpture. The sensitive and evocative assembly of found objects confronts the visitor with Dahlem’s model of the famous Big Bang, the cosmological phenomenon at the origin of the universe, the discovery of which revolutionized our comprehension of the world while opening the path to multiple interpretations and an even greater number of questions.

Indeed, we are perhaps the custodians of the history of this very carefully observed world, yet we are far from a complete understanding of our origins. With humour, in the style of an archaeologist, Christian Andersson offers us an astonishing journey back in time: contemporary artefacts and objects combine and reassemble a potential chronology through association.

Our knowledge progresses a little more each day, but the assurance of a measurable and unchanging world no longer exists; the metaphysical comfort of an Aristotelian cosmos has been lost. Man is no longer at the centre of things, religions have been exceeded. So, how to exist in this vast world and these reconstructed societies when faced with others and oneself? Certainly, we share cultural and religious symbols that artists often seize upon with distance and detachment: the curious sculpture God Stack by Edward Lipski tangles together the various divinities in joyful syncretism. Nevertheless, numerous are those who, through individual research, invent a personal mythology. Echoing the way in which Pascale Marthine Tayou adorns his glass idols, Kyoichi Tsuzuki's Happy Victims surround themselves with their favourite clothes, like fetishes, thus displaying the same feeling of belonging to a community as the groups of fans brought together by Candice Breitz.

And then, faced with the masked apparitions of Pieter Hugo's photographs, it would seem that no positivism, no rationalism can deprive the human mind of its share of fantasies and that for a long time to come we shall seek the answers to our questions in our dreams.