toucheront quelques fragments d'autrui. Covering twenty years of artistic practice, from the nineties until today, the works featured in the exhibition are all related to collage, montage and fragmentation. The display is itself conceived as a collage in space by the juxtaposition of several mediums, the superimposition of works and the presence of mirrors. 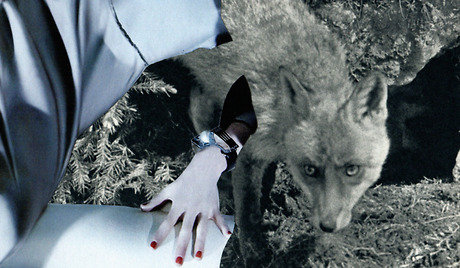 (Only parts of us will ever touch parts of others)

Galerie Thaddaeus Ropac is pleased to announce "Only parts of us will ever touch parts of others", a group show curated by Timothée Chaillou. Covering twenty years of artistic practice, from the nineties until today, the works featured in the exhibition are all related to collage, montage and fragmentation. The display is itself conceived as a collage in space by the juxtaposition of several mediums (works on paper, wallpaintings, sculptures and videos), the superimposition of works (placed on wallpaintings/wallpapers) and the presence of works composed of mirrors, fragmenting the exhibition and the public. This project follows on from shows such as Infinite Fold (2010), dedicated to artists who transform the paper’s surface by folding it, and Landscope (2008), which revolved around the notion of landscape in contemporary drawing.

“Was appropriation somehow a form of ecology? Just another way of collaging the bedroom.” Richard Prince
“Making collage is like running a marriage bureau with lots of very demanding customers. Those that you think will rub along nicely, often file for divorce within minutes.” Linder

The reality of each one of us is a collage made up of what attracts our attention and of what our memory retains – we build up this reality with what we see through a fragmentary understanding of the world. Our ideas and recollections are often only a collage and collage is likewise the depiction of these associations.

The starting point of any collage is an image (mental or physical), which recalls another, then another, and so on, eventually creating a combination of images. It is a technique, a way of thinking, which allows the association, by chance or deliberately, of two or more convergent or divergent realities. Images take root in a situation, in a space. They are gathered, juxtaposed and arranged – overlapping, following on and superimposing one another – finally generating a narrative.

The images arranged in a collage produce conflicting or fusional, assonant or dissonant interactions. It is an ecosystem of heterogeneous associations, governed by the principle of mutability: it is at once wanting to ‘shout out the resemblances’ (Georges Bataille) and ‘to curb the differences’ (Sergei Eisenstein). Collage is a display of images, a ‘metaphor of fraternity’ (Jean-Luc Godard), a metaphor of dependence, of a lovers’ meeting or of copulation: ‘there is a libidinal adolescent energy in this practice, and a fixation on wanting to paste together things and images’ (Tom Burr). It is a ‘constellation of fragments’ (Haris Epaminonda), an association of images structured by contagion ‘infecting one another’ (Luis Jacob), a presentation of a chain reaction and of a collision.

Collage allows you to ‘think with your hands’ (Denis de Rougemont), by revealing the manual intervention through the indexing, the selecting and the cutting out. Collages are both encyclopaedic and epic in their narrative form, whereas their physical qualities are modest and humble. To be arranged in a collage, the images are mistreated – splintered, cut, divided, torn, fragmented. Thus, a cut-out, a tear, makes the material itself all the more tangible and vivid in all its fragility and brittleness: when we are shown that the images are in fact only printed paper, we refuse the idea that they depict anything other than their mere presence, their mere sensitive flesh as a way of conveying the mystery, the complexity and the contradictions of the world, not seen as a whole but fragmented.

The exhibition catalogue will be available in January 2013, including texts by the curator Timothée Chaillou, the poet Thomas Clerc, the philosopher Boris Groys and the artist John Miller.