'Alone Together' explores a paradox: artists often work in isolation in their studios, but they are almost always seen and defined in relation to a greater whole. This exhibition feature 31 artists exhibited individually in 29 rooms. Oscar Murillo presents paintings made in this summer during a residency at the Foundation. 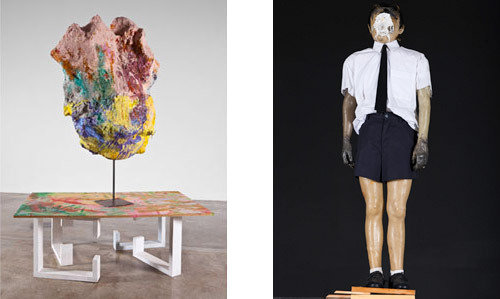 Alone Together will feature 31 artists exhibited individually in 29 rooms. These galleries will often contain multiple artworks by a single artist, many of which are recent acquisitions.

Alone Together explores a paradox: artists often work in isolation in their studios, but they are almost always seen and defined in relation to a greater whole. Whether it is called a movement, a moment, a school, a group, or an -ism, this greater whole ― defined by artists, critics, historians, museums, galleries, collectors, art institutions, and pure chance ― creates a community for the artwork that often lives beyond the life of the artist.

This exhibition is a celebration of many solitary acts of art creation, joined together in the context of the Rubell’s Foundation. It is organized as a precursory survey in anticipation of the Foundation’s overview catalog that will be published in 2013. The exhibition does not represent a community of artists, but a community of artworks joined together by our passion for each individual piece, the time we live in, and fate.

Oscar Murillo: work is the artist’s first solo exhibition in the United States. It is comprised of paintings made by the artist in the summer of 2012 during a five-week residency at the Rubell Family Collection. During these five weeks he lived and worked at the Foundation using a 60-by-60-ft gallery and the sculpture garden as his studio.

A catalog documenting Murillo’s residency and the exhibition will be available.

Murillo, born 1986 in Colombia, is now based in London, UK. In 2012 he presented a performance, The Cleaners’ Late Summer Party with COMME des GARÇONS, at the Serpentine Gallery, London; participated in To the Moon Via the Beach at Maja Hoffman’s LUMA Foundation in Arles, France and had a solo presentation with Modern Art, London at the Independent, New York.

All of the artworks in Alone Together and Oscar Murillo: work are drawn from the permanent collection of the Rubell Family Collection/Contemporary Arts Foundation.

French artist Bernar Venet has been invited by Bugatti, the legendary supercar maker, to create an artwork that combines the artist’s vision with Bugatti’s celebrated Grand Sport. This unique sculptural work will be on view at the Rubell Family Collection in Miami during Art Basel Miami Beach.

Born 1941 in France and based in New York since 1966, Bernar Venet recently presented his monumental sculptures at the Château de Versailles in France. He’ll be participating in the Venice Biennale for his second time in 2013 and has previously exhibited at Documenta in Kassel and represented France at the São Paulo Biennial.

Venet has been the recipient of several distinguished honors such as France’s Commandeur des Arts et des Lettres and Chevalier de la Légion d’honneur, and is also a member of the European Academy of Sciences and Arts. In 2013, Venet will be awarded the international Julio Gonzaléz Prize by the IVAM in Valencia.