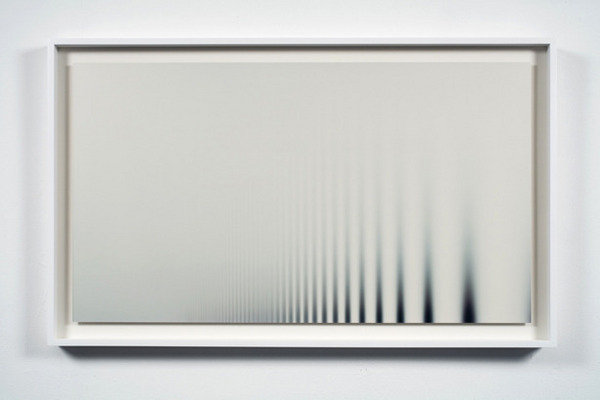 Liz Deschenes's photographs are concrete, self-reflexive, and mysterious all at once. In them, she points to the autonomy of photography as an artistic medium beyond its usual tasks and uses. For some years now, her work has consisted almost exclusively of photograms—images made without a camera—whose surfaces bear the traces of processing and chemical treatment. In a dialog with painting, sculpture, and architecture, Deschenes explores the boundaries of photography, always with close reference to the medium's history. With subtle interventions and site-specific photo installations, she has recently turned her attention to the conditions of exhibiting, allowing viewers to question not only conventional ways of looking at photography but also their own viewing habits.

"The monochrome and other self-reflexive practices do not have a deep history in the photographic medium, mainly because of the medium's inherent ability to record and document." (Liz Deschenes)

Deschenes's work on an expanded definition of photography deals critically with the medium's central property, i.e., its (seemingly) faithful replication of reality, a quality that has always dominated its usage in both practical and artistic contexts, leaving little room for self-reflexive and monochrome artistic strategies.

"The camera reproduces the visual field of the Cyclops, not of a human being!" (Pierre Francastel) The site-specific installation created by Deschenes specially for Secession is a critical reflection on photographic vision (in the double sense of "seeing" and "being seen"). Specifically, Deschenes refers to stereoscopy, a hybrid of mechanical/apparatus-based and human/natural seeing that simulates human three-dimensional vision while retaining characteristics of the two-dimensional photographic image. Deschenes's installations are as subtle as her works that "do not automatically reveal everything" (Liz Deschenes).

Fiona Rukschcio
retaped Rape.
In her films, collages, and projects, Fiona Rukschcio focuses on roles ascribed to women, identity formation by internal and external forces, and extreme emotional experiences. By combining research and documentary materials with her own subjectively charged perceptions, she develops a heterogeneous visual language juxtaposing archive material and the aesthetics of the everyday.

For Secession, she has produced a new film based on Rape (1968) by Yoko Ono and John Lennon. Rukschcio re-filmed the original, in which a young woman is followed by the cameraman through the city of London and back to her apartment, using the same shots in the same locations, but without the woman. This shift raises a series of questions about the links between camera idiom, gazes, violence, and places as collective storehouses of memory.

Fiona Rukschcio (b. 1972, Vienna) lives and works in Vienna.

Yael Bartana
Wenn Ihr wollt, ist es kein Traum
Fragen an Herzl und Freud
The work of Israeli artist and filmmaker Yael Bartana deals with current social rituals and structures in general, and with issues surrounding the cultural identity of her native country, its historical construction, and the resulting tensions and conflicts in particular. In her distinctive poetic manner, she creates a balance between fact and invention, documentation and propaganda, ironically undermining certainties, standing symbols on their heads, and opening up multiple new meanings.

In 2007, Bartana founded the Jewish Renaissance Movement in Poland (JRMiP), both a political movement and an art project, that calls for the return of 3.3 million Jews to the land of their ancestors. Oscillating between reality and fiction, and appealing to collective powers of political and social imagination, both the JRMiP and the film trilogy structured around its activities ... And Europe Will Be Stunned, have sparked debate and won recognition around the world. Bartana showed the complete trilogy for first time in 2011 when she represented Poland at the 54th Venice Biennial.

The first official congress of the JRMiP took place in May 2012 in Berlin. The three-day event served as a discussion forum on the social and political changes in the EU, Poland, and Israel that would be necessary to adequately support the appeal launched by the JRMiP, inviting those attending to collectively imagine this utopia. The film about the congress will be shown at the Secession for the first time, fostering further exploration of existing ideas and the creation of new perspectives.

Wiener Secession
Association of Visual Artists
Guided Tours: Saturdays at 3pm and Sundays at 11am and by appointment.
Gustav Klimt, Beethoven Frieze with Plattform by Gerwald Rockenschaub

Press
For interview requests and any other questions please contact: tamara.schwarzmayr@secession.at
Please find the press releases and images for download here from December 6, 2012: