Unground. The audio-video installation conceived as an empirical artwork, should be experienced as a progressive descent or an immersion in a particular world. 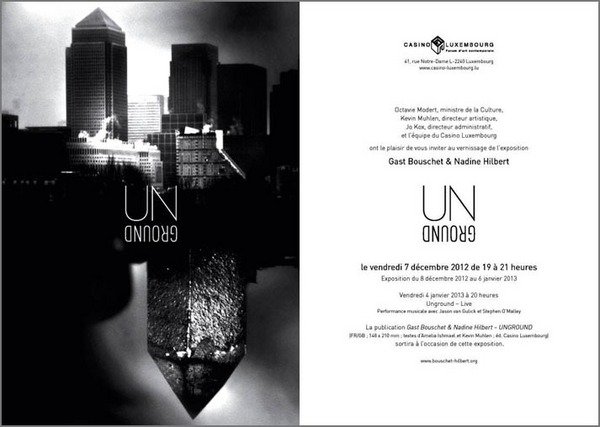 The audio-video installation Unground by Gast Bouschet and Nadine Hilbert is displayed in the historic cellars of Casino Luxembourg, the unique atmosphere of the place – which is similar to that found in grottoes and caverns – perfectly combining with the dark and offbeat universe conveyed by the artistic duo. The whole installation, conceived as an empirical artwork, should be experienced as a progressive descent or an immersion in a particular world.

Between 2010 and 2012, Gast Bouschet and Nadine Hilbert shot videos in London and Iceland. Unground thus begins with sequences filmed at the heart of the financial district of the “City” and Canary Wharf, staging the actors of finance, the agitated flux of a population at the centre of the urban milieu. Disturbing images in black and white set the tone for a reflection on the deviant convulsions of the world economy. The more we plunge into the dark recesses of the cellar, the more city life recedes to be replaced by volcanic landscapes, glaciers and other wastelands in Iceland. The trail takes in typical landscapes that both unite and oppose the financial world (with its day to day precarity) and nature in its most basic condition of strength.

In 2010, the eruption of the Icelandic volcano Eyjafjöll and the resulting cloud of ashes paralysed European air traffic. Bouschet and Hilbert were fascinated by the enormous impact natural forces exert on the course of human affairs and wanted to visually signify this symbolism by placing volcanic ash and ice on the lens for each shoot. This process created dark or even opaque areas in the images, conferring a blurred and non-transparent vision on the takes and disturbing our visual bearings. According to the artists, it is a “piece about the profound crisis of perception we are going through.” (Gast Bouschet). Through the world thus manifested, the artists engage in a metaphysical reflection on the “archaic” forces which determine consciousness and reality.

The images coupled with the music engender both the cognitive process and physical sensations. The videos were coupled with sound and put to music by Jason van Gulick for the London sequences and by Stephen O’Malley for the second part of the exhibition – with the aim of confronting two distinct musical universes. The tormented, syncopated rhythms of the drums (van Gulick) reply to the agitation of the city at the beginning of the trail. The images become gradually more abstract while time and movement slow down and the sounds darken and become heavier (O’Malley). A concert-performance by Jason van Gulick and Stephen O’Malley has been programmed for Friday 4 January 2013, providing an opportunity for spectators to immerse themselves in the universe of Unground.