Among over 400 works of modern and contemporary art, that meet within the landscape of the exhibition, are the paintings by Pablo Picasso, Meret Oppenheim and Robert Maciejuk, Bill Viola, Magdalena Abakanowicz and Miroslaw Balka, Paul Klee, Katarzyna Kobro and Louise Bourgeois or Tamasz Kasasz and Kolo Klipsa as well as Georges Braque, Douglas Davies and Aleksandra Ska. 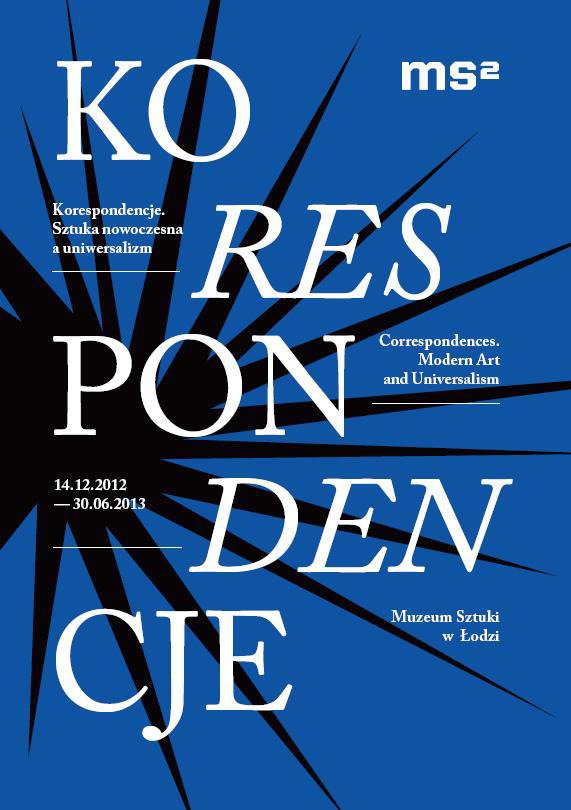 The exhibition 'Correspondences. Modern Art and Universalism' presents a vast and multidimensional panorama of the 20th and 21st century art. The correspondences between the works of art, verbal and pictorial interventions by Tomasz Kozak and the unusual exhibition space designed by Krzysztof Skoczylas reveal the story about the major phenomena of the past century art in their contemporary senses.

Among over 400 works of modern and contemporary art, that meet within the landscape of the exhibition, are the paintings by Pablo Picasso, Meret Oppenheim and Robert Maciejuk, Bill Viola, Magdalena Abakanowicz and Miroslaw Balka, Paul Klee, Katarzyna Kobro and Louise Bourgeois or Tamász Kasász and Kolo Klipsa as well as Georges Braque, Douglas Davies and Aleksandra Ska. Surprising and mysterious correspondences between the experiences contained in these works become revealed in these meetings.

The exhibition stretches a net of relationships among the works of art, word and pictorial interventions by Tomasz Kozak, texts from a variety of philosophical and literary traditions, and complex spatial forms. Developing correspondences between these elements was inspired by the way in which Walter Benjamin constructed his 'Arcades Project' in the years 1927-1940 - a bold attempt at formulating material historiography. Within the exhibition 'Correspondences. Modern Art and Universalism', the historical matter - works of art, archive material, fragments of texts and interpretations - was grouped within twelve arcades, corresponding to the key experiences of the last hundred years: Lost Letter, Warping Space, Uncanny Dwelling, Joke-Work, Promises of Death, Modern Beauty, Narcissus' Reflections, Materialisation of the Gaze, Seduction of the Everyday, Aesthetics of Commodification, Crises and New Orders and the Politics of Dreaming.

Simultaneously, the exhibition poses the question about the role of contemporary art in creation of transnational culture and, more specifically, about the prospect of its universalisation. Such question is sparked by the remarkable symmetry between the two collections - between the collection of Rupf Foundation / Kunstmuseum Bern and the collection of Muzeum Sztuki in Lodz. Despite different founding ideas and grounds as well as different conditions under which they were developed over the decades, they are strikingly symmetrical, sometimes almost identical.

Hermann Rupf in Switzerland, a Bernese businessman, one of the first collectors of the avant-garde art in the world, bought works of art for private purposes and out of personal passion. Due to close friendship with Daniel-Henry Kahnweiler, a leading Parisian art dealer, from 1907 onwards Rupf bought works by Picasso, Braque, Klee and Kandynsky, sometimes even in the year of their creation. Initially, the works were exhibited in his private apartments and offices. However, since Rupf saw art as a tool of social change, already in the 1940s he started efforts to locate the collection within a public institution. Finally, in 1954 he donated the collection, through the foundation of his name, to Kunstmuseum Bern, where it is still being developed.

In Poland, the artists and poets of the 'a.r.' group, on Wladyslaw Strzeminski's initiative, from 1929 led the campaign – mainly in Paris – to acquire works of art for the newly established art museum in Lodz. The avant-garde artists - including Max Ernst, Fernand Léger, Hans Arp and Alexander Calder - were asked to donate their works to the International Collection of Modern Art. The development of the collection was from the very beginning accompanied by the idea of its public presentation. Endowment of the collection to the Lodz Museum and its public opening, which took place already in 1931, was a form of implementation of the avant-garde art key task - transformation of the reality. As a result, there emerged one of the first avant-garde museum collections in the world. The core collection of the Museum of Art in Lodz, the gift by the „a.r.' group, was expanded with subsequent modern art works and is still being developed today.

By setting together the two unique collections, the exhibition 'Correspondences. Modern Art and Universalism' attempts to ask the question about the significance of art today. In particular - about the possibility, even the need for sharing cultural experience in the current globalised world.