Two golden rings. Kovanda engages in an artistic practice founded on the repetition of everyday actions and gestures as a means of intervention and a stealthy and almost furtive resignification of public space. Two golden rings are placed at two different spots in the Palacio, establishing a kind of dialogue between the visible and the invisible, the valuable and the functional. 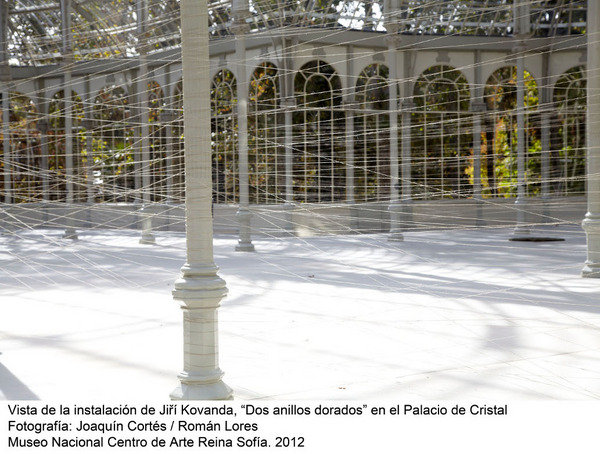 Kovanda is one of the most prominent figures in contemporary Czech art and, though he’s reluctant to catalogue his works as conceptual or political, he entered in the international European scene in the late seventies with different public actions, made in a deliberately subtle manner, avoiding any direct involvement by the public. However, despite the imperceptible and ephemeral character of these interventions, Kovanda’s aim was to approach and create reactions in his audience.

“Cheap and simple things can sometimes turn out to be important and extraordinary, while expensive objects can be invisible. [...] It just depends on the situation,” states the artist. Jirí Kovanda engages in an artistic practice founded on the repetition of everyday actions and gestures as a means of intervention and a stealthy and almost furtive resignification of public space. That collective space is interrupted by activities as anodyne as preventing two strangers from holding a conversation, walking deliberately (or not) into passers-by in the street, trying to catch the eye of the person behind while descending an escalator, waiting in front of a telephone until it rings without previously arranging a call, or scratching at a heart carved on a wall by unknown individuals. Such encounters and situations, sometimes unexpected and sometimes provoked, lead to exchanges that may be either unforeseen or purposefully led, and when they occur, these almost imperceptible actions modify the space and time in which they are carried out.

Two Golden Rings is an intervention created specifically for the Palacio de Cristal (‘Crystal Palace’), a venue which, like Kovanda’s work, hovers between the public and the private owing to its transparency and its location in a park. Two golden rings are placed at two different spots in the Palacio, establishing a kind of dialogue between the visible and the invisible, the valuable and the functional. Ordinary objects – dry grass and a rope – sustain and frame these valuable items, which at the same time draw a revitalising attention to what generally goes unnoticed in the day-to-day. The large size of the building, multiplied by its transparency, emphasizes the smallness of the rings, monumentalized yet at the same time neutralized by the rope and the dry grass, both with their roots in the poetics of arte povera.

The architecture of the Palacio becomes part of the installation, a space born of the monumentalization of the invisible, glass, by means of the material which initiated architectural functionalism, iron. Metal and glass, presence and invisibility, rigidity and weightlessness.

In earlier projects, Kovanda has been interested in glass as an element which permits virtual contact between physically separated individuals. He demonstrated this in Kissing Through Glass, an action in which a couple kissed through a transparent glass pane. Here, the two people, invoked in absentia by these two rings, are on the same side of the glass, inside the architecture, but their separation is more obvious, for one is mimetized while the other is literally tied to the building.

An exhibition reorders the world in accordance with certain principles, and its presentation of disparate elements brings about a democratizing effect. Everyday objects with no value a priori stand alongside pieces whose monetary value may reside not only in the fluctuations of the market but in the gross value of their materials. This artistic intervention shows the tension between everyday elements and objects, the memory of a democratized culture of luxury, and gold as a “safe” value at critical periods. The gold standard has dominated the international financial system for centuries, resisting inflation thanks to a value which is tied down, just as one of these rings is literally tied to a building with links to Spain’s colonial past. However, this does not make it untouchable. Kovanda thus draws attention to the conventional nature of the value attached to objects and the precariousness of its supports.

This fluctuation and precariousness is itself a feature of the glass architecture of the 19th century, a type of construction which was in many cases ephemeral or designed to hold various forms of vegetation. One example of the latter case was the colonial exhibition of flora from the Philippines that was opened in this very Palacio de Cristal in 1887, a decade before the great Spanish crisis of 1898. Similarly ephemeral, impure and precarious is action art and the site-specific installation. By a mimetic effect, the golden tone acquired by the grass as it turns into straw camouflages the presence of the ring and so reveals a loss: that of its value and of its ownership, and that of its sense of being bound to the other. It thus becomes the testimony to a loss – a mere lost object.

Biographical notes
Jiří Kovanda’s trajectory started in the seventies in the experimental environment of conceptual art and Czech actionism, with a special interest in opening up to the public domain. He’s also known by his newspaper and magazine-made collages since the 1980s, his readymade or works made up with found objects and his paintings —never figurative— and installations. In all his facets and creations one can perceive the artist’s attraction for the ephemeral and the spaces in which art and everyday life tend to mingle. His works move away from all pretentiousness and all kinds of snobbism, defying the most recognised and acknowledged contemporary art to achieve a very direct and visually powerful language, as his main weapon lie in simplicity and direct communication, often garnished with humour and irony.
He currently lives and works in Prague, where he combines art with a teaching labour, which he considers an indissoluble whole, essential to understand his practice. His work has been seen in important art centres both in Spain (CGAC-Centro Galego de Arte Contemporánea de Santiago de Compostela; Centre d’Art Santa Mònica de Barcelona) and abroad (Tate Modern London, Centre Pompidou in Paris).