The exhibition include approximately 40 paintings, sculptures, videos and installations, and gathers his early works from the mid-eighties until his most recent creations. Zobernig appropriates art histories to question their underlying narratives and ideological positions, subverting and reinterpreting them with a lightness of touch and an economy of materials, means and methodologies that is playful, dry, witty, unsettling and disarming. 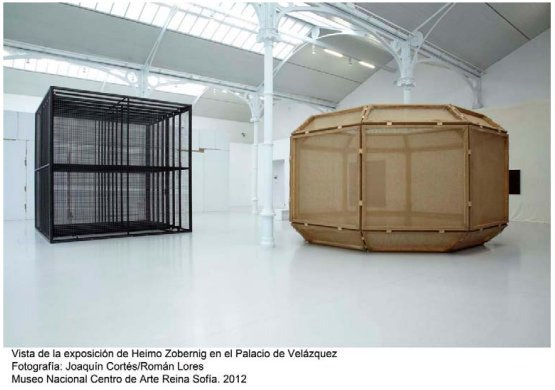 Museo Reina Sofía presents, in collaboration with Kunsthaus Graz (Austria), the first retrospective in Spain of Austrian artist Heimo Zobernig (Mauthen, 1958). The show, held at Palacio de Velázquez in the Retiro Park, will include approximately forty works (paintings, sculptures, videos and installations) and gathers his early works from the mid-eighties until his most recent creations.

Heimo Zobernig is one of the most significant artists working in Europe today. Having exhibited worldwide, he has created a considerable body of work that includes paintings, sculptures, videos, installations, architectural interventions and performances. His work critically engages with various modern art movements, as well as with architecture, design and theatre. Zobernig appropriates art histories to question their underlying narratives and ideological positions, subverting and reinterpreting them with a lightness of touch and an economy of materials, means and methodologies that is playful, dry, witty, unsettling and disarming.

In Zobernig’s exhibitions the process of exhibiting and the contexts in which it happens becomes the exhibition. The floor beneath a sculpture is as interesting for the artist as the sculpture itself, and a painting on a wall is as important as a small architectural intervention in the exhibition space. By staging minimalist arrangements of objects from the apparatus of exhibition environments, he produces a tension when he absolves them from their usual function and replaces their common meaning with another, developed between the artist and his audience. The resulting presentation dispenses with the object, its place taken by the mechanisms of presentation. Besides individual artworks, the space hosting the exhibition, the Palacio de Velázquez, is itself considered an essential part of the show.

All partitions in the Palace, a wide-open space with seven annexed rooms, were removed by the artist, with only a few temporary walls from the previous exhibition left. Temporary walls have become an indispensable element of contemporary exhibition architecture, their scale and materiality often giving an impression of permanence in exhibitions. At the Palacio de Velázquez, Zobernig draws our attention to a number of these walls by lining them up with their joints visible, emphasising their temporariness while turning them into a sculptural object. This object fulfills both the task of engaging architectural structure of the Palace space in a dialogue with a large curtain installation, and creating an intimate area in which smaller sculptures from Zobernig’s early oeuvre are displayed.

Zobernig’s artworks take the form of ambiguous objects, appearing to visitors as ‘art for art sake’, as traditional modern artwork, with their skilful, formally resolved and abstract appearance resisting an ‘easy reading’. But, in a deferred action, the art objects also reveal themselves – by gently introduced shifts that undermine predominant art historical classifications – as quotations of such objects and their ‘readings’; as manifestations of the research Zobernig has conducted throughout his career on correlations between form and the creation of significance.

The staging of the art is at the heart of Zobernig’s exhibition at the Palacio de Velázquez: with its curtains, white screens to be filled with imaginations, and architectural elements such as temporary walls and carpet floors, including a sculpture that appears to be both a minimalistic work of art and have the function as storage rack for paintings. It becomes evident that without the considered staging of art, no art exists. However, in the ‘play’ staged by Heimo Zobernig, the curtain as a ‘fourth wall’ is dispensed with, putting into action what progressive theatre aims to do. Zobernig invites the audience into his play, to contemplate their own role as being more than mere viewers, and instead be an essential part of a carefully arranged exhibition, one that is orchestrated and choreographed to allow correlations of object and discourse to emerge, creating a space of meaning between them. Zobernig requests us to stroll through the plots, to sit down and to engage in self-reflective iconoclastic thinking about how significance is created in the arts and beyond.