Salon of the Museum of Contemporary Art

Platon's mirror. In his new exhibition project two aspects are included: a perception-aesthetics component, as well as the possibility of a novel type of image generation through computer tomography. This gives rise to highly topical issues within art, and for it. Within the project, light politics and media politics are re-negotiated. There will be a Symposium held at MoCAB Salon on November 9. 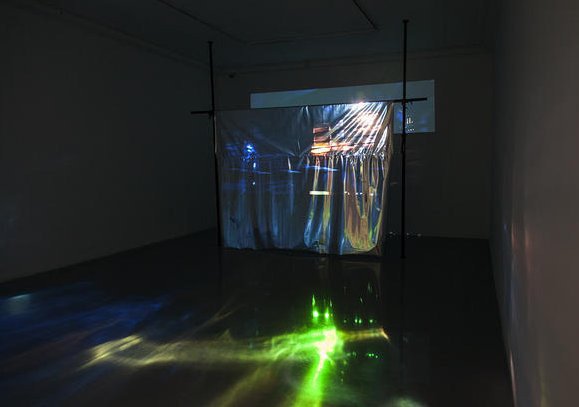 Düsseldorf-based media artist Mischa Kuball is among the few artists who has consistently understood light’s (socio-)political dimensions and used the media accordingly in numerous works in gallery exhibitions and public space projects.
In his new exhibition project “platon’s mirror”, two additional aspects are included: a perception-aesthetics component, as well as the possibility of a novel type of image generation through computer tomography. This gives rise to highly topical issues within art, and for it. Within the project, light politics and media politics are re-negotiated.

The idea for “platon’s mirror” is based on one of the most influential stories within European literature: Plato’s cave allegory. In it, the philosopher draws a distinction between two forms of reality: the reality of the visible world and the (true) reality of ideas. For an artist such as Kuball, who is in a class of his own in his confrontation with the phenomenon of light in his work, the cave allegory necessarily became an artistic challenge. In formally simple yet highly effective installations using projectors, silver foil, photographs and videos, Kuball creates perceptual and experiential spaces that evoke Plato’s story about the cave. On the other hand, in his photographs and videos Kuball translates the complex relationships among light source, reflection, silhouettes, and representation into seemingly endless stages of mediation, within which reality is continually newly constituted as the reality of its reflection.

Kuball’s work can not only be seen as an attempt at re-actualising Plato, but moreover as an attempt to question anew the classic connection between the metaphor of light and the idea of Enlightenment.

The exhibition is organized in cooperation with the Goethe-Institute and is on the international tour with a total of fifteen stations, starting from ZKM Karlsruhe and including, among others, Berlin, Sydney, Auckland, Bucharest, Thessaloniki, etc.

In conjunction to the exhibition there will be a Symposium held at MoCAB Salon on November 9 with Duncan White, Christian Katti, Stevan Vuković Zoran Erić and Mischa Kuball.

Since 1984, Mischa Kuball (1959 in Dusseldorf) has been working in public and institutional spaces. He has received notable awards and scholarships and since 1991 he has been teaching at various universities and art schools. In 1999/2000 he was visiting professor at the Academy of Visual Arts Leipzig, working on the subject of “light and space.” From 2004 to 2008 he taught media art at the University of Arts and Design Karlsruhe. Since October 2007 he has been professor for media art at the Academy of Media Arts Cologne and founded the -1/MinusEins Experimentallabor there.

Using the medium of light, in installations and photography, he explores architectural spaces and contributes to social and political discourses. He reflects the varying facets of cultural social structures to the point of architectural interventions that either highlight or reprogram the character and architectural context. In politically motivated and participatory projects the public and private space are crossed over. They make possible a communication between participants, the artist, the art work, and the public space. For the Sao Paulo Biennial in 1998 Kuball worked with private lamps. In later years, architectures such as the Mannesmann Tower in Dusseldorf (1990) or the Stommeln Synagogue (1994) were transformed into individual bodies of light. During his project …a window in the Johanneskirche in Dusseldorf (2011), he also worked with natural light. He has realized further pieces in well-known institutions in Germany and abroad: at Bauhaus Dessau (1992), the Jewish Museum, New York (2002), Hamburger Kunsthalle (2007), and NTT-Intercommunication Center Tokyo (2008). Temporary installations were exhibited at Kunstsammlung NRW Dusseldorf (2005), Neue Nationalgalerie, Berlin (1999), ZKM | Center for Art and Media Karlsruhe (2005) and Centre Pompidou-Metz (2010). Additionally, since 2009, Kuball has developed a series of site-specific installations entitled public preposition that were shown at Caserma Cornoldi, Venedig (2009), Chinati Foundation, Marfa, Texas (2009), in Toronto, Canada (2011) as well as in the context of the Bone 14 Performance Art Festival, Bern (2011). In 2010, on the occasion of RUHR.2010 and the European City of Culture, in collaboration with Harald Welzer and Christoph Keller, Mischa Kuball organized NEW POTT, a participatory project with one hundred families from one hundred countries. Since the beginning of 2011 his complex project platon’s mirror has been exhibited at ZKM | Museum of Contemporary Art Karlsruhe, Artspace Visual Arts Centre Sydney, MNAC in Bucarest, Central St. Martins College of Art And Design-London, Kunsthalle Dusseldorf, and other places. Numerous publications accompany the ephemeral, mostly time-based projects, among these are Florian Matzner (ed.), Mischa Kuball‚…in progress 1980–2007, Hatje Cantz, Ostfildern, 2007, and Harald Welzner and Mischa Kuball (eds.), New Pott – neue Heimat im Revier, JRP Ringier, Zurich, 2010.

Duncan White is currently a research fellow at Central St. Martins College of Art and Design, University of the Arts London. He was the editor and co-author of Expanded Cinema: Art, Performance, Film (London, 2011). He has published a wide range of scholarly research in the areas of artists’ film and video, Media Art, and experimental writing practices.

Christian Katti (near Munich in 1966) studied philosophy, art history, and psychology at the Universities of Munich, Berlin, and Potsdam. He held a Getty Grant Program scholarship for the Summer Institute of Art History and Visual Studies at the University of Rochester, New York, and the College Art Association, New York, and participated in a Postdoc-Seminar of the Pembroke Center of Brown University, Providence. There, he taught at the Department for Modern Culture and Media and was also research associate at the Jacobs University Bremen. Currently, he is a doctoral candidate in philosophy and has been working on various concepts for numerous exhibitions. He translates and copy-edits scientific publications, various presentations, and conference articles and writes texts on art, psychology, and philosophy.

Opening of the exhibition: Thursday, November 8, 2012 at 7PM

Salon of the Museum of Contemporary Art
14 Pariska Street, Belgrade
Working hours: from 12PM to 8PM, except on Tuesdays