tues-sat 10-6 and by appointment

The More Things Change. Thousands of river-washed pebbles and rocky debris, lacy treetops emerging from the mist and striated mountains covered in snow. 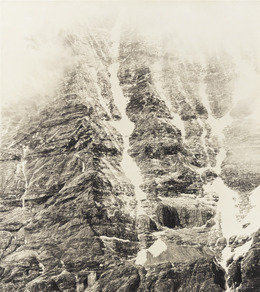 Von Lintel Gallery is pleased to announce The More Things Change, an exhibition of new drawings by Joseph Stashkevetch.

This latest body of work represents some of Stashkevetch's most complex drawings to date. The subject matter—thousands of river-washed pebbles and rocky debris, lacy treetops emerging from the mist and striated mountains covered in snow—is executed with a painstaking level of intricacy and detail.

Stashkevetch develops his large-scale black and white compositions gradually, employing his signature technique. In progressive stages, the paper's surface is sanded away as the image is built up with conte crayon. The conte bonds to the paper, and the two materials become one. The process, both additive and reductive, creates an atmospheric quality in which light and shadow are in constant play.

Time is palpable in these monumental works. This is owed in part to the imagery, which alludes to the enduring history and cyclical nature of our planet. Yet the subject matter itself, the 'what' and the 'where,' becomes secondary. Standing before the work, one's focus shifts instead to the patterns embedded in the surface of the paper and the sheer breadth of Stashkevetch's compositions. Each mark is emblematic of the artist's time as the drawings break down and become as abstract as time itself. The imagery, while striking in its beauty, is merely a framework upon which Stashkevetch masterfully builds his effects.

Born in the United States, Joseph Stashkevetch studied at the Rhode Island School of Design. The artist's work has been exhibited extensively in the United States and Europe and appears in numerous public and private collections, including the Whitney Museum of American Art and the Dallas Museum of Art. The artist lives and works in New York. This exhibition marks the artist's fourth solo show with Von Lintel Gallery.