Double Life Presented through the In Practice Program

The show brings together a group of artists that share a performance-based approach to sculpture. Common strategies include inhabiting the physical site of exhibition, leaving indexical marks on images of their own making, and re-contextualizing or re-animating various objects, images, and readymades. Also opening will be Nairy Baghramian: Retainer, his work provokes questions about the potential for sculpture and art as an aesthetic tool. 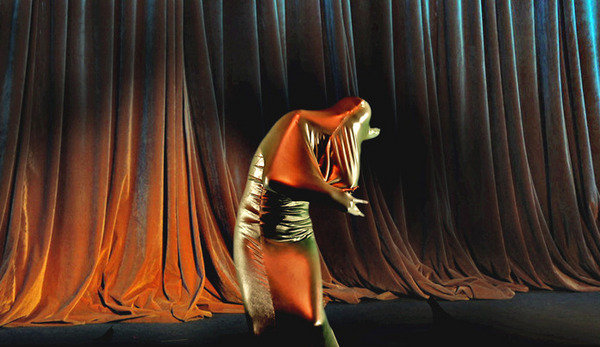 SculptureCenter is pleased to present the exhibition Double Life, which brings together a group of artists that share a performance-based approach to sculpture. Common strategies include inhabiting the physical site of exhibition, leaving indexical marks on images of their own making, and re-contextualizing or re-animating various objects, images, and readymades. Adopting a sense of synchronistic time that is at once immediate but also located in moments of reflection, these artists investigate themes such as identity construction, authorship, and alienation amidst current conditions that are multicultural, hyper-mediated, and increasingly focused on self-presentation. Double Life examines the role of the contemporary artist and our collective nature as self-performers, as well as our identification with, and attachments to everyday objects.

Double Life is curated by Kristen Chappa, SculptureCenter Assistant Curator, and is on view from January 14-March 25, 2013.

The newly commissioned projects presented in Double Life were created as part of SculptureCenter's In Practice program. In Practice supports the creation and presentation of new work by emerging artists and reflects diverse approaches to contemporary sculpture. Artists are selected through a call for proposals and are provided with an honorarium, production budget, fabrication and installation assistance, as well as invaluable curatorial and administrative support. This year SculptureCenter received over 800 applications from artists worldwide.

Born and raised in Bangkok, Thailand, Korakrit Arunanondchai lives and works in New York. His practice, that includes painting, video, performance, and installation, utilizes distinctive cultural imagery to manifest and synthesize dynamic aesthetic and conceptual dichotomies. His work investigates cross-cultural relationships to modernism and capitalism, influenced by traditional Thai patterns, Japanese Manga, and notions of Western art history. Arunanondchai holds a MFA from Columbia University, a BFA from the Rhode Island School of Design, and recently completed the Skowhegan School of Painting and Sculpture residency.

David Berezin's practice investigates the cultural legibility and reception of objects to explore the construction of meaning and its ability to be manipulated. Working in a variety of media--video, photography, sculpture, and installation--Berezin uses visual signifiers to create compositions that imply narrative, but obstruct a singular reading of content. Berezin was born in Los Angeles, CA and received his BFA from the California College of the Arts, San Francisco. He has exhibited at the Shanghai Biennial and had a solo exhibition at the Columbus Museum of Art.

Paul Branca's work employs the language of painting as a starting point to engage with ideas about distribution, process, communication, and artistic practice. His work takes interest in a socially engaged field, conceptual ideologies, and explores tensions that exist between objects and staged events. Branca received his MFA from Bard College and BFA from Queens College, CUNY. He was recently included in the group exhibition, Matter Out of Place, at The Kitchen.

Working in video, sculpture, and performance, Lea Cetera's temporal installations investigate constructed identities, the aura of the fetishized object, technology, alienation, fantasy, and role-play. Influenced by theatre and performance, she examines the space between the object and body, the public and private, the virtual and real. Cetera co-founded the experimental performance group IMAGINATIONEXPLOSION (2004-2008). She holds a MFA from Columbia University and a BFA from Cooper Union. Select performances and exhibitions include Galapagos Art Space (New York) and PortugalArte 2010.

Working in sculpture and installation, Rachel Foullon utilizes abstraction to recall minimalism's emotional severity, and its ability to reconcile opposites, such as the sacred and profane. Her rich-hued fabric dying process evokes bodily fluids both mundane and violent, underscoring the schizophrenic permeability between the body's inside and out. Foullon received her MFA from Columbia University and BS from New York University. She has held residencies at the Grizedale Arts/Wordsworth Trust in Britain and Vivere Venezia 2 at IUAV, La Biennale di Venezia in Italy. She had a recent solo exhibition at the University Art Museum, University at Albany (New York). Born in Glendale, California, she currently lives and works in New York.

Justin Lieberman's practice is often embedded with parody, evolving out of ongoing investigations for meaning in a world driven by value judgments and contradictions--be they cultural, commercial, artistic, or hierarchical. In 2010, Lieberman was elected as Visiting Artist to Brandeis University, later joining the faculty in 2011. Contributing to the Post-Baccalaureate program, he founded the group S.A.C., based on the idea of collaboration between artists, collective authorship, and exhibition practice. He received a MFA from Yale and BFA from the School of the Museum of Fine Arts, Boston.

Molly Lowe is a New York-based interdisciplinary artist. Working in sculpture, installation, performance and video, she creates uncanny alter-realities that imbue the everyday with a mythological sense of importance. Lowe received her MFA from Columbia University and BA from the Rhode Island School of Design. She has held residencies at the Skowhegan School of Painting and Sculpture in Maine, Elsewhere Collaborative in North Carolina, HMK in the Netherlands, and Tropical Lab in Singapore. Her recent group exhibitions include Flux Factory (New York), and the Santa Monica Museum of Art.

Shana Lutker is a Los Angeles-based artist whose work borrows from psychoanalysis and surrealism. Using a combination of photography, sculpture, installation, drawing, and performance, she presents found objects in situations that examine the relationship between history, memory, and interpretation. Lutker received her MFA from UCLA and BA from Brown University. She has previously exhibited at CCA Wattis Institute (San Francisco), and Artists Space (New York). Lutker also participated in the 2008 California Biennial and Performa 09. She is managing editor of X-TRA magazine a Los Angeles-based contemporary art quarterly.

Julia Sherman's current artistic practice engages with folk traditions, canonical art history, and feminist theory. Utilizing research as raw material, Sherman collaborates with individuals to investigate other cultures or seminal, but little-known events, to produce symbolic objects, documentation, and narratives that speak to the story of their making, more than the physical sanctity of objects themselves. Sherman is the founder of the artist-run Los Angeles gallery Workspace. She has contributed to publications including The Highlights and Triple Canopy. She received her MFA from Columbia University and BFA from the Rhode Island School of Design.

SculptureCenter is pleased to announce the exhibition RETAINER by Berlin-based artist Nairy Baghramian. This will be her first exhibition in the United States. Baghramian's work examines political and social systems of power and encompasses questions of context, production, and reception within contemporary art.

With the support of our Artist-in-Residence commissioning program, Baghramian has produced a new work for SculptureCenter's main exhibition space that is suggestive of a corrective prosthesis for the building. For Baghramian, exhibition spaces are conceptual structures as much as they are habitable buildings. Their historically determined design and layout become both reference and structure of the work. This new sculpture constructed from chromed struts draped with "sheets" of cast silicon, will occupy the entire main exhibition space. Partially industrially fabricated and partially handmade, the work provokes questions about the potential for sculpture and art as an aesthetic tool, but also highlights art's dependency on its own context.

Nairy Baghramian was born in Isfahan, Iran in 1971, and has lived and worked in Berlin since 1985. Baghramian's recent exhibitions include a solo show at the Vancouver Art Gallery, a two-person show with Phyllida Barlow at Serpentine Gallery in London, and solo exhibitions at Kunsthalle Basel, Kunsthalle Baden-Baden, Kunstverein Aachen, and Kunstverein N&uumlrnberg. Her work has been featured in several major international exhibitions including Sculpture Project M&uumlnster (2007), the Berlin Biennial (2008), Illuminations at the 54th Venice Biennial (2011), the Glasgow International Festival of Visual Art (2011) and Temporary Stedelijk 2, Stedelijk Museum(2011). Her work is currently on view in Olinka, o donde se crea el movimiento at the Museo Rufino Tamayo, Mexico City. She has upcoming projects at Muzeum Sztuki W Lodzi, Poland and MIT List Visual Arts Center. Baghramian was awarded the 2012 Hector Kunstpreis, which included an artist publication and an exhibition at the Kunsthalle Mannheim.

An opening reception will take place on Sunday, January 13 from 5-7pm and is open to the public. Bryan Zanisnik will perform with his parents, Bob and Carol Zanisnik, during the exhibition's opening reception and Sundays during gallery hours from 3-6 PM.