Girls girls girls. Particularly informed by the Greek word ekphrasis, del Mar has described her practice as operating in a similar exchange: book covers and movie posters come before the books and movies and, in some instances, stand alone. 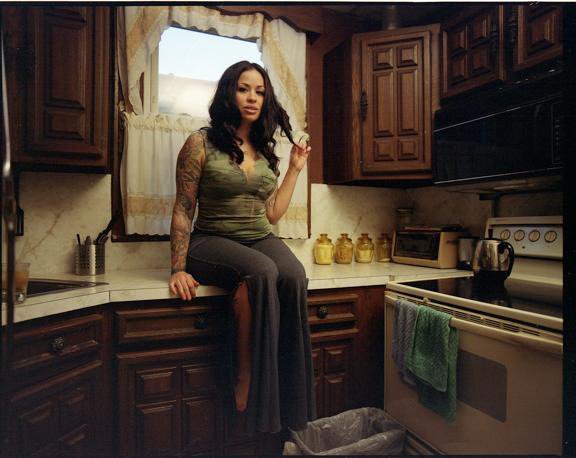 Katrina del Mar is perhaps best known for her decades-long work in video and photography, chronicling the reality and illusion of her Lower East Side friends and lovers as punk heroines; or within her girl gang movie world of strictly female population. Creating a family tree indebted equally to B-movies and diaristic photography, del Mar’s defiantly queer photographs and videos are iconic alternatives to the cultural status quo, offering an exuberant, hyper-stylized sexuality, an unapologetic feminist voice, and often guerilla-style production tactics.

Particularly informed by the Greek word ekphrasis, a rhetorical device in which a description of a work becomes the work in and of itself, del Mar has described her practice as operating in a similar exchange: book covers and movie posters come before the books and movies and, in some instances, stand alone. She has noted, “Long after my films are finished, I am writing the novels they should have been based on. I write modern myths set in urban environments.”

With this logic in mind, GIRLS GIRLS GIRLS presents an expansive selection of photographic works, beginning with a shelf of handmade pulp fiction paperbacks. Their covers, designed first, become starting points for del Mar’s fictional excursions inside, though some remain empty. On the walls, photographs are grouped into loose narratives. Arcs and archetypes—surfer girls, bike gangs, girls playing in their rooms, bedroom scenes including the artist and others—feature dogs, cars, leather, tattoos. These become fictionalized signifiers of the threat of women’s violence, which the artist, as ringleader, marshals as an active participant. Adding light and color to the powers that urban life has to offer, del Mar creates “...a fantasy that moves from violence to sex rather than vice versa....” (Chicago Reader)

Jenifer P. Borum has noted of del Mar’s work: “These glimpses she gives us are not of marginal inhabitants of our world. Those leather femmes with their dogs. Those pierced, sleeved-out dykes on the street. They look like they’re from the cool neighborhood of the city, but they’re not from here. Like Henry Darger’s In the Realms of the Unreal, del Mar’s world is both epic and dystopian—a fictional reality that seems very much like our own, only with different rules.”

Katrina del Mar is a New York-based photographer and award winning film director. Her solo exhibition Gangs of New York was presented in 2010 at Wrong Weather Gallery in Porto, Portugal. Invited to teach at the University of the Arts in Bremen, Germany, she conducted the first ever Queer Trash Feminist Film Workshop, also in 2010. In 2012, she presented a series of films and photographs from the Golden Age of Performance Art (1988-2000) with Dona Ann McAdams, On the Edge of Society: Moments in Live Art, at Warehouse 9, Copenhagen, Denmark. Her work has shown at Deitch Projects, NY; Museum for Contemporary Art (CAPC), Bordeaux, France; American Fine Arts Company, NY; Binz 39, Zurich, Switzerland; Bass Museum of Art, Miami; Miami Light Project; P.S.122, NY; FabLab, Berlin; and the University of Cardiff, Wales.

Archiving and documentation projects are supported by an award from the National Endowment for the Arts. Our programs are supported, in part, by public funds from the New York City Department of Cultural Affairs in partnership with the City Council.