Invisible More Visible More Invisible, by Godinho, is an experience stamped with nomadic flexibility that is particularly concerned with undoing established orders of political and cultural structures through artworks that appear at the same time as poetic, philosophical and conceptual. The exhibition [as if] by van der Straeten, proves to be the most comprehensive overview to date dealing with the artist's oeuvre. Her art work since the 1980s has been concerned with films, installations, drawings, photographs and objects. 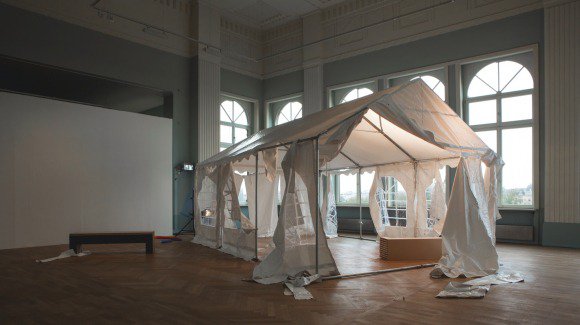 Marco Godinho’s exhibition is evolving through three stages: following an initial presentation at Neuer Kunstverein Aschaffenburg (September – November 2012), it will be the turn of Casino Luxembourg – Forum d’art contemporain to host it (19 January – 28 April 2013) before its final presentation at Faux Mouvement – Centre d’art contemporain in Metz in the Spring of 2013. This approach allows him to feed on the context of each site, while varying the constellation of the body of artworks presented – which include both existing pieces and new productions each time.

These successive changes of location make Invisible More Visible More Invisible an experience stamped with nomadic flexibility that is particularly concerned with undoing established orders of political and cultural structures through artworks that appear at the same time as poetic, philosophical and conceptual.

The reference to the present moment that is constantly redefined, questioning our linear convictions, memory and perception of space-time, constitutes not only the conceptual base of the exhibition but is above all closely linked to artistic practice and Marco Godinho's personal journey. Born in Portugal in 1978, he grew up in Luxembourg and today divides his time between his adoptive country and Paris. His work reflects his personal experience of being continually uprooted and is therefore naturally anchored in the theme of wandering. The latter, which "literally" engages the action of walking (with or without an aim), takes the form of a free perambulation through a series of artworks. Indeed, each exhibition encourages the public to walk differently through the space; it induces the imagination to create not only new connections between the objects but also a number of reinterpretations. Conceiving an exhibition as a journey implies the idea of a starting point and a destination. However, what most interests Marco Godinho is the interstitial time of the journey as such, which is marked by the experience of the traveller, including memories and doubts. This also allows the artist to disengage himself from obvious links, from a local or individual context. Constantly deconstructing his certainties allows a universal openness to the world and questions the way in which we move in it.

The title Invisible More Visible More Invisible is constructed like a mantra in a sort of loop and is the common thread be-tween the exhibitions. When read, the repetition of the words - the result of which is reminiscent of a false palindrome - may lead to hesitation and confusion, the meaning appearing and disappearing to the rhythm of the pronunciation of the words. What is more, the layout of the words - "visible" being central and trapped between "more" and "invisible" - is an opportunity for Marco Godinho to contemplate the point of view of things: the greater the distance from the centre, from the familiar middle (at least perceived as such), the more the subject becomes ungraspable and opens up to other possible realities. This situation creates unusual attitudes which transform our way of being in general.

By playing on phenomena of appearance and disappearance in his work, Marco Godinho addresses the complementary frontiers between the visible and the invisible, the tangible and the random, departure and return, ultimately in order to question our relationship with life, the very idea of presence and absence, memory and reminiscence, the passage of time and the infinite search for meaning in an increasingly uncertain world.

Andrea van der Straeten
[as if]

The exhibition [as if] by Andrea van der Straeten, first presented at the Landesgalerie Linz, groups together existing works as well as new productions. The overall project of exhibition and catalogue with the title [as if] proves to be the most comprehensive overview to date dealing with the artist's oeuvre. Her art work since the 1980s has been concerned with films, installations, drawings, photographs and objects which are located at various points on the interfaces of the different mediums. The artist repeatedly pursues her concepts as a systemic interventions and in so doing analyses mediums such as film and photography along with processes, procedures and the functional connections in art itself.

One key notion in many of her completed projects is "information". What is true, what is only a rumour or even fake? What information and meaning is inscribed in things, objects and their depictions? How does communication about their contents function? How can this be decoded? Which words are used, which language? A second key notion is the "reference". Van der Straeten repeatedly pursues her concept for a work by referring to a story, which becomes manifest at particular points in history. The referential space here is defined as a broad spectrum that includes women's and gender issues, biographical moments and political events as well as local and literary sources, and extends to the history of art and institutions. This referencing and artistic re-working of reference material takes the form of deconstructing history as a fixed narrative form. The artist proves to employ a particular precision in her choice of subject matter in this field and be sensitive to connections and contexts.

Andrea van der Straeten conceived of the two exhibitions - in Linz and Luxembourg - as a sequence of rooms in which she interlaces works from different contexts of origin. This results in a special parcours-without any claim to being a retrospective-that covers van der Straeten's work to date. She has, however, added something special, developing a project for each of the two locations involved. For Linz she realised the video installation [as if]; for Luxembourg the work Abend Land Morgen Rot and, in addition, there is Die Familie der Bilder which links the two institutions.

The artist, who was born in Trier, Germany, has been living in Vienna since 1987. She is a professor at the Kunstuniversität in Linz and head of the department of experimental design at the Institut für Bildende Kunst und Kulturwissenschaften.