Cyprien Gaillard's work navigates geographical sites and psychological states, addressing the relationship between architecture and nature; in 'The Crystal World' he presents over 80 works, including 5 major cinematic works and two site-specific. Atkins's solo show features a two-channel video and surround-sound installation. Recent activities of Metahaven studio have included a range of research, identity and product design for WikiLeaks, as well as proposals for the identity of Sealand, a self-proclaimed sovereign nation-state. The firm Confettisystems creates set designs, objects, and interactive installations for a range of partners including corporate clients, musicians, and art institutions. Jeff Elrod creates abstract paintings using basic computer software as a starting point. 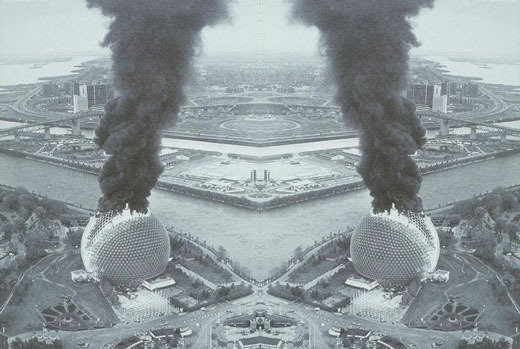 Cyprien Gaillard's (b. 1980, Paris) work navigates geographical sites and psychological states, addressing the relationship between architecture and nature, and evolution and erosion. Using a variety of artistic mediums ranging from painting and sculpture to photography, film, and video, Gaillard juxtaposes pictorial beauty and the atmospherically lush with elements of sudden violence, destruction, and idiosyncrasy culled from popular culture, pointing to the precarious nature of public space, social ritual, and the very viability of the notion of civilization.

Combining minimal composition, a romantic visual sensibility, and a youthful, anarchic spirit, Gaillard's work displays a personal vision or reading of landscapes and cities, whether he trains his gaze upon land art sites, crumbling 1960s urban high-rises, culturally entrenched logos, explosive building demolition procedures, or public monuments. He invests these sites with new traits through his interventions, resulting in architectural travelogues dense with layers of suggestive symbols, as well as an incisive examination of the foundations and inventions of civilizations, both ancient and modern, revealing their simultaneously seductive and alienating features.

The artist's first solo exhibition in New York is comprised of over 80 works, including five major cinematic works and two site-specific works made in New York on the occasion of his MoMA PS1 presentation. In Cities of Gold and Mirrors (2009), shot in Cancun, Mexico, images of Mayan ruins are interspersed with the golf courses, mega-resorts, and tourists that now saturate the area, as incensed adolescents guzzle tequila with the same elated fervor that characterizes a ritualistic dance performed by a gangster on the ruins of El Ray.

Shown for the first time in the U.S., Gaillard's monumental work Artefacts (2011) imparts a reflection on the myth of Babylon takes form through a montage of scenes from post-conflict Iraq interwoven with images of the ancient civilization's antiquities, none more famous perhaps than the Ishtar Gate, reconstructed in an austere gallery of the Pergamon Museum in Berlin in the 1930s. Gaillard echoes this anachronism in the artwork's material itself Artefacts (2011) was shot on the artist's iPhone, and the resulting digital video was transferred to an older 35mm format, in which the work is exhibited as a continuous loop. This scheme highlights the fragility of an outmoded cinematic material, which wears and frays as it is projected over the course of the exhibition period, mimicking the cyclically endless nature of civilizations' periods of growth and decline, and also the artist's fascination in objects that are at once obsolete and eternal.

Gaillard is perhaps best known for his Geographical Analogies (2006) series, composed grids of Polaroids that are placed in visual correspondence with one another, presenting impressionistic inventories of landscapes and entropic architectural structures that connote psychologically, emotionally, and viscerally. The photographs, like much of the artist's work, capture images of ancient ruins, abandoned bunkers, and graffiti-covered urban structures- in short, disparate sites that are unified by their shared states of physical change, erosion, or decay over time.

Combining elements of the found, the photographic, the cinematic, the architectural, and the social, Gaillard provokes visual or associative connections between ancient ruins and neglected contemporary spaces, attempting to recuperate the past in the name of a devalued present.

The exhibition is supported by The Contemporary Arts Council of The Museum of Modern Art.

Known for his high-definition videos that defy narrative conventions, Ed Atkins (British, b. 1982) works with filmic and text-based forms that are in technological transition. The artist considers HD technology deathlike because of its virtualized form, and he deploys the bodiless movie format to highlight the conflicting intimacies that contemporary mechanisms of cultural production represent and allow us to achieve. Unlike traditional films, which prioritize the image over the soundtrack, Atkins gives equal importance to what is seen and heard, playing visual conventions against those of sound composition and editing. Sudden transitions mark his work, drawing our attention to the artifice of contemporary “film” in its accelerating transition to new digital formats capable of remarkable kinds of simulation.

Atkins also writes prolifically, and often makes his writing available in chapbooks within the space of his exhibitions (while also publishing such texts online). In his essay Notes on HD (2011), Atkins writes, “The HD image, detailing a death of cinematic delusion, exposes the ‘reality’ of each and every subject of the camera’s gaze as deathly, as crucially deathly, brimming with death—a deathliness for the sake of representation, wherein the surrogacy of representation approaches a pinnacle of such accuracy that it no longer represents but simply is the subject.”

The exhibition—Atkins’s first solo show in the United States—features a two-channel video and surround-sound installation, Us Dead Talk Love (2012), which focuses on a dialogue between two cadavers who reflect upon representation, immanence, and narcissism. Atkins describes the work as “a tragedy of love, intimacy, incoherence and eyelashes.” Also included is a new single-channel work, Warm, Warm, Warm Spring Mouths (2013). On the occasion of the show, MoMA PS1 has published in a single volume the artist’s screenplays for the two works, which will be available for free in the galleries.

Metahaven: Islands in the Cloud

Founded by Vinca Kruk and Daniel van der Velden in 2007 as a design and research studio, Metahaven has come to define a new methodology in graphic design. The studio’s speculative practice privileges the vocabulary of graphic design as a means of knowledge production, using it as a tool to analyze organizational models and power structures. Investigating political and economic design—including nation branding and logo production—in relation to statehood, currency and information networks, Metahaven places particular emphasis on transparency and visibility.

The Amsterdam-based studio produces a continuous stream of research that rarely results in finite, codified work. They publish books and essays, organize conferences and collaborate with policy makers, concurrently working on new commissions while maintaining a variety of self-initiated projects. Recent activities have included a range of research, identity and product design for WikiLeaks, as well as proposals for the identity of Sealand, a self-proclaimed sovereign nation-state located on a platform built by the British seven miles off the English coast as part of a naval defense strategy during World War II. Materials from both projects are included in this exhibition, alongside elements relating to a new cloud hosting enterprise based in Iceland. Islands in the Cloud is the first museum show to focus on Metahaven’s unique practice.

The artist-design firm CONFETTISYSTEM works in a multivalent environment that resists simple categorization by discipline. The firm creates set designs, objects, and interactive installations for a range of partners including corporate clients, musicians, and art institutions. Comfortable in an advertising campaign, on a concert stage, or in a gallery, their work can be regarded as sculpture, design, and product—a confluence that is unconcerned with differences of commercial enterprise and nonprofit, the varying demands of function and aesthetics, and distinctions between consumer and connoisseur.

For MoMA PS1’s two-story gallery, CONFETTISYSTEM (Nicholas Andersen and Julie Ho, est. 2008) has created an immersive environment inspired by the mechanics of theatrical staging and fly systems. Evoking theatrical scrims and curtains, 100 Arrangements features new and older design elements by Andersen and Ho that are suspended from above and can be adjusted to varying heights to produce nearly endless permutations. The work serves as a performance space, playing host to live events that are part of MoMA PS1’s Sunday Sessions program. The variable environment can be reconfigured to best suit each event, highlighting a compositional system that allows for a functional design.

CONFETTISYSTEM has art directed and created installations and sets for numerous fashion brands as well as musical acts Beach House, Yeah Yeah Yeahs, and Beyonce. In addition to decorating for private celebrations and working as creative consultants for numerous private labels, CONFETTISYSTEM has created custom design work for The New York Times, American Ballet Theatre, Opening Ceremony, Lanvin, Other Criteria UK, and Pop magazine with Gagosian Gallery, among others. For the past three years, CONFETTISYSTEM has created custom stage sets for MoMA PS1’s Warm Up music series.

Jeff Elrod (American, b. 1966) creates abstract paintings using basic computer software as a starting point for his artistic process. Using a technique he calls "frictionless drawing," Elrod began experimenting with computers to create paintings in 1997. While software allows for the production of lines and color fields without direct intervention of the artist's hand, Elrod aligns his work with the long history of painting and abstraction. For these new paintings, Elrod processes his original computer-generated drawings into blurry images to create visual fields that resist coherence. The space, shapes, and lines from the artist's original drawings are lost and the indeterminate blur that he creates becomes the paintings' dominant aesthetic form.

Organized by Klaus Biesenbach, Director, MoMA PS1, and Chief Curator at Large, The Museum of Modern Art. The exhibition is made possible by the MoMA PS1 Annual Exhibition Fund.

On Sundays between September 16, 2012 and June 30, 2013, the VW Performance Dome will house Sunday Sessions, an amalgam of artistic programming—from light, sound, and music installations to lectures by world-renowned scholars and special performances. Various other galleries and rooms inside of the former schoolhouse will be activated during these weekly sessions.
Sunday Sessions is organized by Jenny Schlenzka, Associate Curator, MoMA PS1 and Eliza Ryan, Assistant Curator, MoMA PS1 with Alex Sloane, Volkswagen Fellow.
Sunday Sessions is made possible by MoMA's Wallis Annenberg Fund for Innovation in Contemporary Art through the Annenberg Foundation.

DEPRESSION, performance by Ed Atkins
3 PM · VW Dome
In conjunction with the opening of his exhibition at MoMA PS1, Ed Atkins presents a performance piece called Depression, about death, bodies, and disintegrating matter. Known for his high-definition videos that defy standard narrative conventions, Ed Atkins works with filmic and text-based forms in technological transition. For Atkins, HD images are otherworldly. Since they are recorded to a hard drive and not onto film, they are not tied to any physical medium. Because of HD’s virtualized form, Atkins considers this recent technology deathlike, a bodiless movie format.

CLOG’s most recent issue focuses on the National Mall in Washington, D.C. The Mall functions as a place of protest and celebration, as well as a place of memorialization and education. As we are currently in an era of significant memorial building in New York and elsewhere the issue focusses on the future of the memorial—how do they integrate technology, how long should they last, who are they built for, what is their educational or healing role, and what is their aesthetic? CLOG will host a conversation between contributors Friedrich St. Florian and Nicholas Benson, and monument expert Lucia Allais.